Fatherhood and vampirism make strange bedfellows in the Shudder exclusive film, BLOOD RELATIVES. Noah Segan (Glass Onion: A Knives Out Mystery) stars as Francis, a leather-jacketed, Yiddish-speaking vampire who spends his nights traversing the countryside searching for (deserving) prey. Francis’ un-life is thrown into chaos when his half-human teen daughter, Jane, portrayed by Victoria Moroles (Teen Wolf), the product of a short romance with a mortal woman, tracks him down in the hope of getting some answers about her bloodsucker heritage. Initially reluctant, Francis and Jane, both outsiders, eventually bond in this touching and funny subversion of a long-in-the-tooth horror trope. 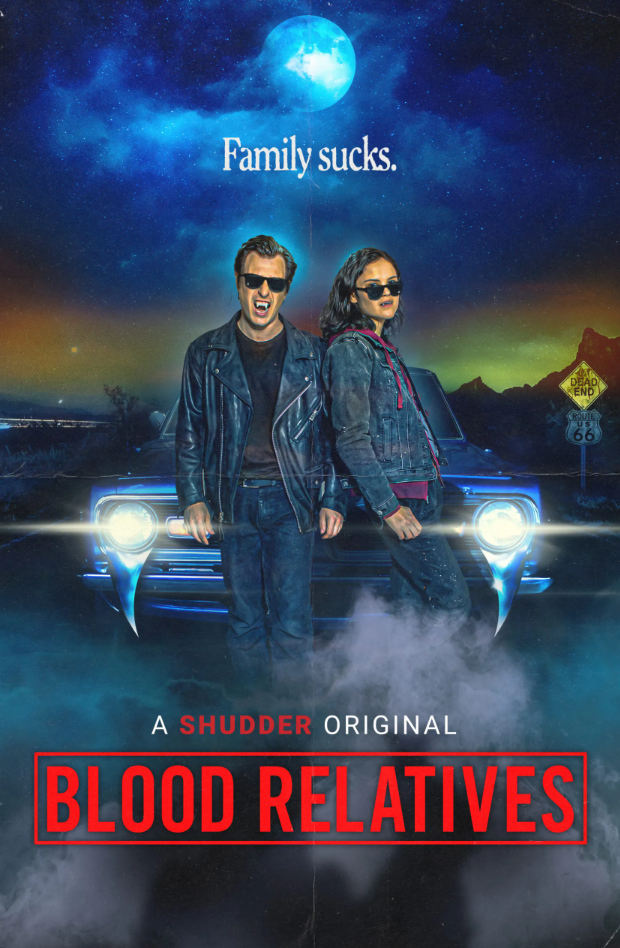 Filled with laughs, scares, and genuinely heartwarming moments, BLOOD RELATIVES is the rare horror comedy that works. Segan, who also wrote and directed BLOOD RELATIVES, opens up about his unique take on vampires and familial relations in this interview with RUE MORGUE Online Managing Editor William J. Wright.

At its core, BLOOD RELATIVES is a film about family. Obviously, there are many ways to tell a story about parents and children. Why vampires?

Because vampires are cool, right? You know, I’ve always identified with vampires, mostly because they are cool, but also because of the idea and the duality of living forever, but what are you living for? And that question has always been in the back of my mind. What does that mean? And the self-awareness that goes with being a vampire? They know they’re a vampire, and they usually have to build their life around that. So as I’m thinking about that monster, I’m looking in the mirror, and I’m thinking, “Holy shit! I’ve spent my life thinking, ‘This is who I am, and this is what I’m doing.’ And now I’m doing something completely different. I’m starting a family.” So they kind of dovetail together in that thought process as I was thinking about the story. 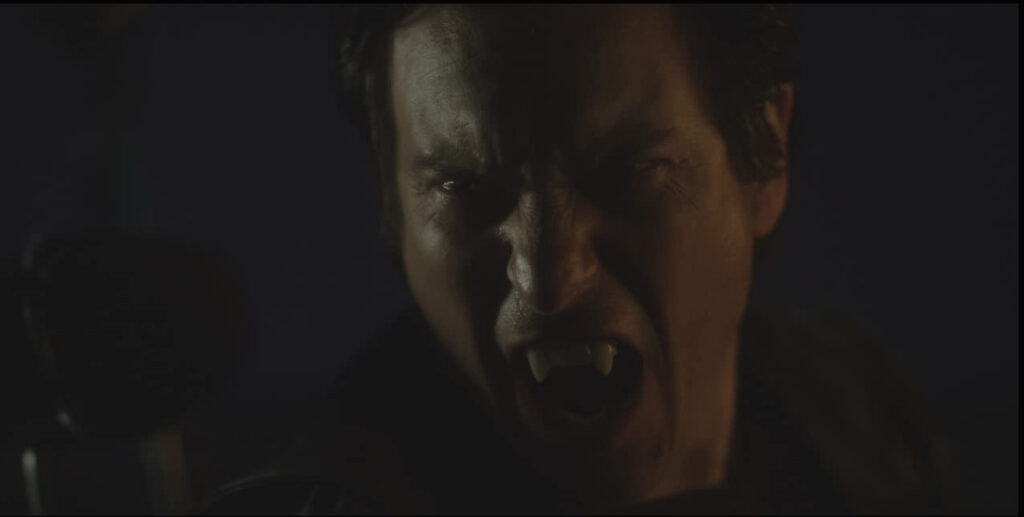 Did you write the script with yourself in mind to play Francis? What were some of the challenges of handling writing, directing and starring in a project like BLOOD RELATIVES?

I don’t know that I wrote it specifically with a mind for me to act in it so much as I was writing what I felt I was going through. I was writing kind of the feelings in the journey. I was writing a version of it that I felt was applicable to me. So I did feel connected to it. As an actor, it’s not hard for me to read or write a script and sort of see how that might translate into a performance.

When it came time to make the movie, finding an actor to thread that needle felt like it was going to be really difficult. And I felt like I could maybe take some of the pressure off of the rest of the cast and the crew by doing it myself. Little did I know that it was going to be an even heavier lift. Of course, I thought, “Well, you know, I’m there anyway – might as well act in it!” No, it’s a little more complicated than that. And luckily, I had these incredible partners. I had Victoria [Moroles], who plays Jane – who’s really the real hero of the movie – who is such an incredible actor that she was able to come every day, very correct, very confident and keep things stable in that department as an actor.

Then, I have Josh Rubin, who plays the Renfield character, Roger, who’s producing and had also acted in, wrote and directed a movie called Scare Me a couple of years ago. So I knew that having him there, he knew what I was going through. He would be able to maybe give some insight and some support in that respect. At the end of the day, it really did become about having a very, very strict, stable support system to border all of those lines between producing, writing, directing and acting. 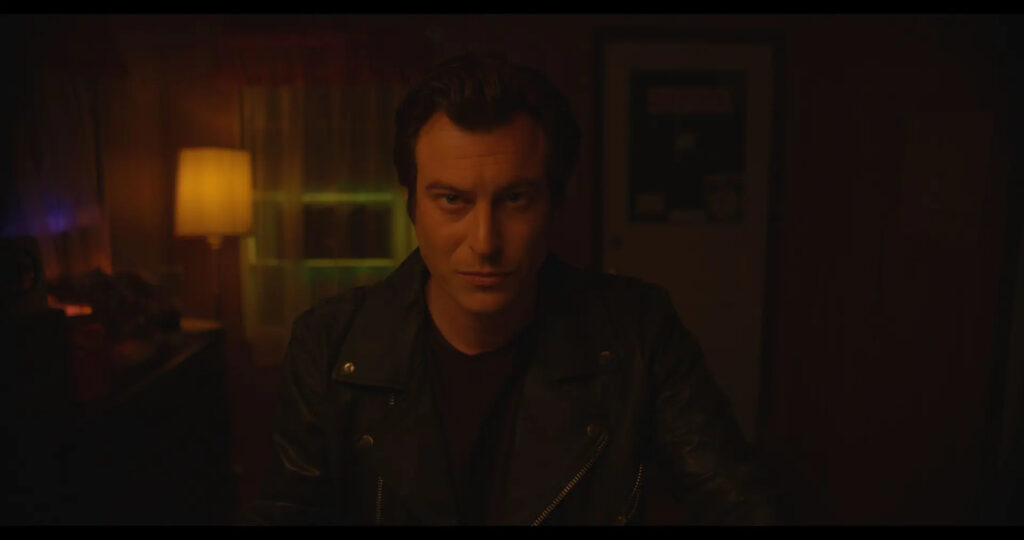 It would be very easy to go really broad with the humor or, conversely, lean hard into the drama or horror elements in a film like BLOOD RELATIVES. How did you strike that balance between comedy and drama?

I appreciate you saying that I struck the balance! [Laughs]

You know, the crutch that I leaned on was “dad” jokes, right? The crutch that I leaned on was stuff that makes me laugh. And, you know, there’s a risk there because you’re saying, “Okay. Well, I hope the stupid thing that makes me laugh makes [the audience] laugh.” And so you’re taking a risk there. But in doing that, and then kind of acknowledging that, you’re saying, “Well, shit, I’m also taking the risk with all the other stuff, too.” Even if you’re not in the same position that I am. Even if you’re not a parent or even if you’re not a recovering vampire, you at least are keying into some of these feelings and some of this journey, and you can see something that you’re going through spoken to here. So I think as long as those questions were asked, it’s kind of like, how self-aware are we? Then, we were in a safe space, or we were at least in the place that I wanted the movie to be in.

I was really surprised by the intimacy of the story. There’s no existential threat or unstoppable villain to be defeated. It’s a story about a father and daughter. Did you consider keeping the stakes so small and personal a risk?

Well, I think all movies, on some level, are personal, right? I mean, somebody writes every movie. So to a degree, I think it’s really a matter of whether the audience agrees with that – if it means something to them. You don’t make [a movie] for yourself. You make it for other people to watch and feel something for. And to that end, I felt like the movies that I love today are movies that I saw as a kid that made me feel grown up, made me feel sophisticated [and] didn’t make me feel like I was being talked down to. Now, as an adult when I watch them, whether it’s The Goonies or Ghostbusters or Don’t Tell Mom the Babysitter’s Dead – any of these movies – when you look back at them as an adult, sometimes they give you comfort and they make you feel like you’re being seen a bit in a different way. Now you’re being seen from the perspective of somebody who can appreciate the depth and what it means. I think that was sort of the goal with BLOOD RELATIVES, to maybe make something that isn’t for kids or adults, but is really something that can help bridge the gap and maybe make grownups feel something a little bit nicer, a little bit whimsical and maybe allow younger viewers to feel like they’re invested in a sophisticated story. 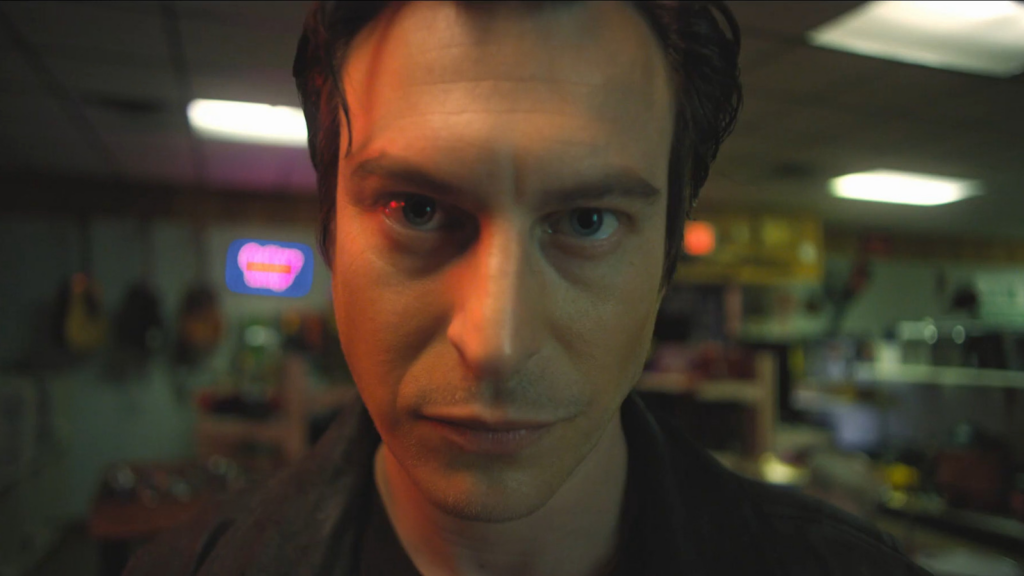 It’s really subversive in that way. In most genre films, there’s a formula in which there always has to be some Earth-shattering crisis, but BLOOD RELATIVES seems content to be just a small story. When I was watching it, the movie that came to my mind was Paper Moon. BLOOD RELATIVES is like Paper Moon with fangs.

They always say steal from the best and Paper Moon was number one with a bullet the movie that inspired me as I constructed BLOOD RELATIVES, along with Raising Arizona. But, you know, I think the important vibe that I was trying to project is that when we are in a family, when we’re parents, oftentimes, the conflicts that we go through feel like they’re the biggest thing in the world. And for us, they are – your relationships with your friends, with your kids, whoever the most important people are in your life. Working that stuff out is the most important thing. It isn’t an existential threat. I mean, it isn’t an existential threat to humanity, but it is an existential threat to you. And so you have to address it, and you have to work through it. The beauty of that, not to get on too much of this other soapbox, is that we generally don’t question whether we’re going to do it when you come through for somebody that you love. You just do it, and that energy is the same energy, whether it’s one person, or whether you are a superhero who has to save the entire world.

I think it’s a complicated question that definitely hangs over the movie in terms of a lot of the roots of antisemitism and the history of blood libel and the connection between Eastern European vilification of Jews and how that sort of dovetails into vampirism. There’s a lot of connection there, and a lot has been written about it. From my very personal perspective, without thinking about these really big-picture points that I hope are part of the conversation, I’m a Jew, and I’m a fifth-generation New York Jew. And I am blond-haired and blue-eyed. In a lot of ways, I can operate in the world in a way that other people who are not members of marginalized communities can. To me, that spoke to the vampire angle and trying to include that.

Then, on sort of a level of social responsibility, I’m trying to do my part to speak from my personal place of feeling like someone who isn’t like everybody else, which we should all be doing. We should all be able to have our human experience that is the unique experience of our culture, and to have that included in whatever story we tell and be something that we celebrate, that’s something that’s, hopefully, funny – which is a real hallmark of the Jewish American experience. We’re laughing and we’re crying at the same time. So it felt like that made a lot of sense for the movie.

There’s so much of Francis and Jane’s story that’s left untold, and so many potential avenues to explore with those characters. Can we expect to see more of them in a future film?

Ask for it, and I’ll do it! I serve at the pleasure of the audience. I love Francis and Jane’s story. I think that families are complicated. Monsters are complicated. Everybody’s family are monsters. They’re just our monsters. I would love for that to be a story that continues to be told. So if there’s a place for it, let me know. I’ll be there.

BLOOD RELATIVES is available now, only on Shudder.

William J. Wright
William J. Wright is a professional freelance writer and an active member of the Horror Writers Association. A lifelong lover of the weird and macabre, his work has appeared in many popular publications dedicated to horror and cult film. He lives in Knoxville, Tennessee, with his wife and three sons.