Writers have no business visiting the country. Stop doing that. Whether you are a budding Jack Torrance hoping to write the Great American Novel, overcome alcoholism, and house-sit a boiler or the less deranged Maddie Young in 2016’s Hush, take caution that fleeing a well populated area in favor of “nature” will result in nefarious happenings. All writers should move to New York City. There was never a haunting at the Algonquin Round Table. In fact, the only Big Scary I can think of taking place in NYC (lest we include a scene or two of Friday the 13th Part VIII) is Rosemary’s Baby, and that’s really just a commentary on procreation. However, a certain continuing chapter of a certain insufferable show (that I have seen 9,000 times) would benefit immensely from its protagonist taking a weekend in the country. And Just Like That… could have followed the hijinks of the newly widowed Carrie Bradshaw who escapes the cruel world of New York City and its dependence on at-home exercise (exercise kills more people than ghosts do!) to live in a haunted former brothel where she does battle with the ghost of Samantha Jones who is always slightly messing with her shelves of Manolo Blahniks. Sadly, Sarah Jessica won’t return my calls.

Instead we have 1981’s THE NESTING, an exciting blend of haunted house and gore, released somewhere in between The Amityville Horror and the birth of the Video Nasty. Starring Robin Groves (Silver Bullet), John Carradine (Stagecoach), and Gloria Grahame (Oklahoma!) in her final film role. Written by Daria Price and Armand Weston (who also directed). The film runs an impossibly long 104 minutes. The pacing is perpetually off, the chase sequences are too long, and a sense of urgency cannot be found anywhere. I almost turned this off several times, but intrigue kept me going…intrigue but not tension. Bad! Bad movie! And can we talk about the title? I can’t think of a more itchy name for a movie. Not to be confused with The Nest which came out around the same time and is actually about a bug infestation. Alternate titles included Phobia and Massacre Mansion. These are great titles! Who made the final decision on THE NESTING? And why not just call it what it is, I ask you? Why isn’t this movie called Spooky Brothel Time? 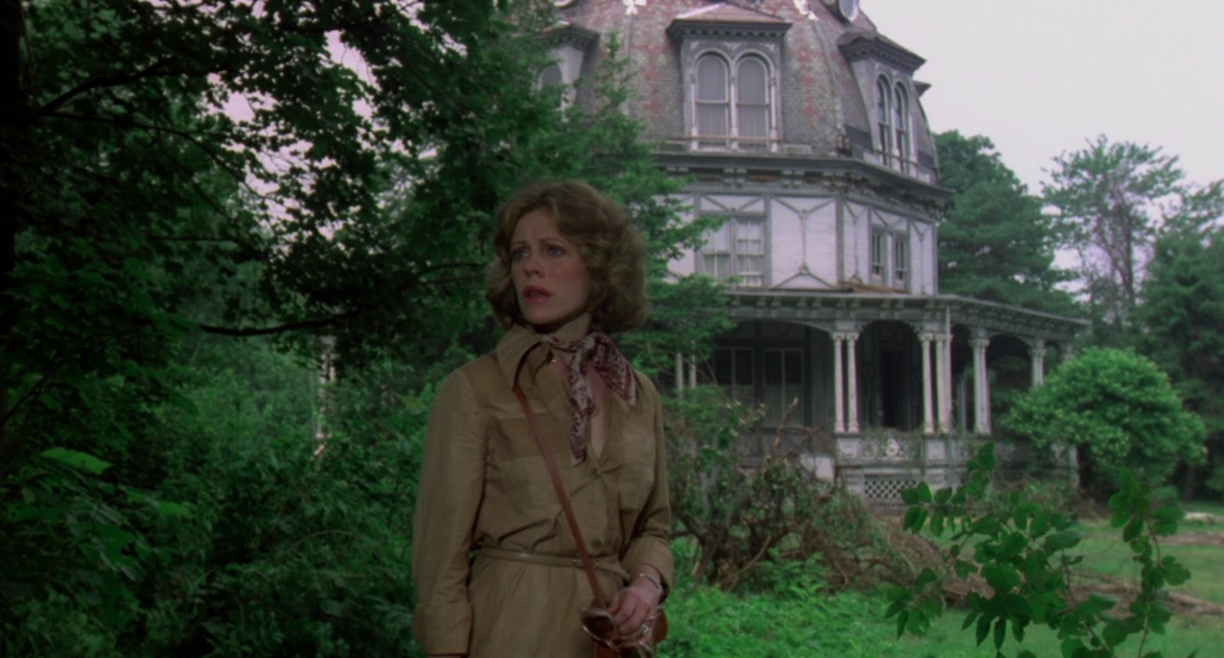 Lauren Cochran (Groves) is a big city writer and a modern girl: she has sex without fussing over marriage and sees an analyst named Dr. Webb (Patrick Farrelly). At the start of the film, Lauren has a panic attack which leads to a diagnosis of agoraphobia. Being the proactive, independent lady that she is, Lauren rents a house in the country to work on her book and recover. She picks a place called Dover Falls because she claims it came to her in a dream. Pretentious, but I accept. This is the classic sleepy town where nothing bad could ever happen, etc. Lauren goes for a walk in the woods and comes upon a dilapidated mansion which looks exactly like one she describes in the settings of one of her books. Spooky, right? She rents it. Lauren possesses a Scream-like level of self-awareness, but similar to the characters in that acclaimed film series, she still marches right into the danger place. When Lauren goes to the owner, Col. Lebrun (Carradine), to ask to rent the property, he has a stroke.

“This would be a perfect place to write,” says Lauren about the old mansion. Yeah, red flag number one. There are no perfect places to write. Writing is something that happens unplanned, accidentally, and anywhere. It does not conform to great lighting, the perfect desk, or Joni Mitchell softly strumming her guitar in the background. No, ma’am. Writing is a terrible process, and to suggest that she has discovered the perfect place to write is brazenly misleading to lil Stephen Kings everywhere. Strange things occur almost immediately: a lit cigarette is found in an empty room, a window cracks, and plumbing rattles from lack of use (okay maybe that isn’t strange). Lauren seems to take to these phenomena rather than flee from them.

She dreams of an old timey brothel which almost resembles 1985’s Clue. Instead of Miss Scarlet we meet Florinda (Grahame), the fabulous madame. “We have to go back to the roots of this trouble,” says a man in her vision. Only she knows him. Lauren realizes he’s Daniel (Michael Lally), the grandson of Colonel Lebrun. Lauren treats mental health as an active project, she is not trapped forever on the metaphorical shrink’s couch. So too she treats these visions as clues leading to a larger case. They must mean something, right? As she leans into her supernatural detective work, Lauren clashes with her therapist. He agrees to come and see her at the mansion. 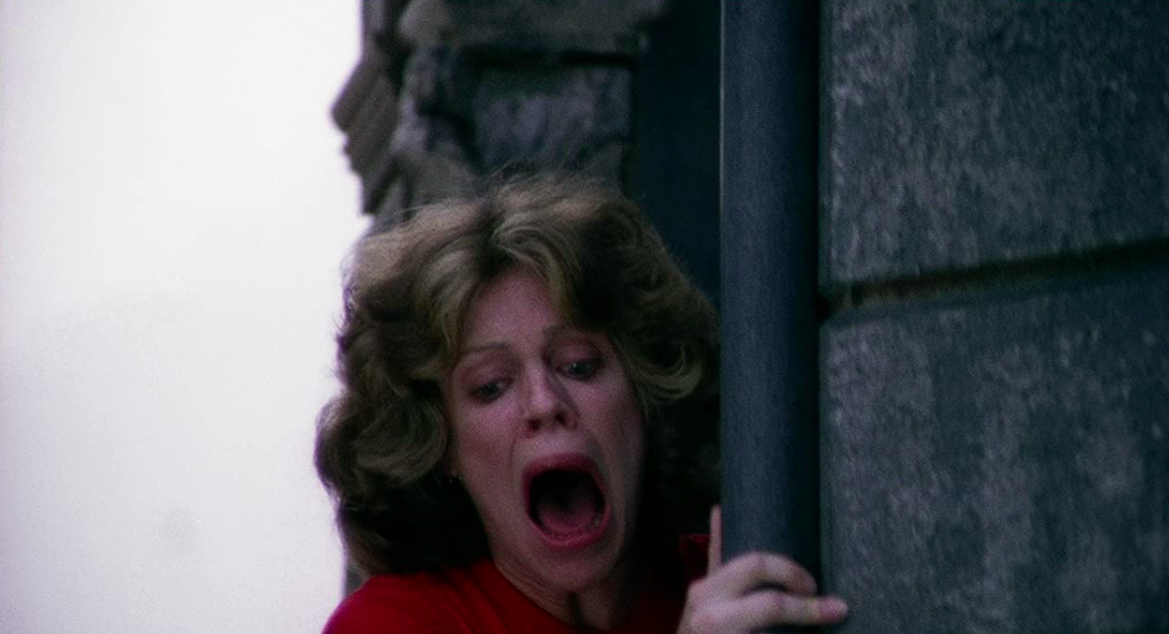 On the day of his arrival, Lauren finds herself stuck on the roof. Dr. Webb climbs to the attic and out a window to help her, only to fall to his death, speared brilliantly in the eye. It brings me back to 1979’s Zombi, which features the apex of eye murders. I loved this sequence because even the film seeks to disorient you. I do not come into a supernatural viewing experience with the expectation of gore. If this were a traditional haunted house film, Dr. Webb would have plummeted to his death bloodlessly. But no, this is 1981 people, and we are upping our game! He must be speared in the eye! There must be oodles of blood!

Two more murders occur in sequences that could have been abbreviated. Lauren accuses Frank the handyman (Bill Rowley) of typing nonsense on her typewriter. He then attacks Lauren but is thwarted by a vision of Florinda who he…recognizes (????). Frank flees the house where he sees the bloodied bodies of whores everywhere. He escapes into the woods shouting “It wasn’t me! I didn’t do it.” As he attempts to cross a shallow stream to freedom, zombie-like hands reach out from underneath the water and drown him. Excellent. As Lauren attempts to investigate the history behind her visions, she meets Abner (David Tabor) who almost instantly becomes an adversary. This chase lasts entirely too long and involves an unnecessary moment where Lauren bites him in the ear. Abner chases her into a barn where he takes a mini-scythe to the face in a death scene that would have been much more enjoyable had the preceding chase been tighter.

“She never should have rented that house,” avers Mrs. Beasley (Bobo Lewis), the town gossip. Lauren is running out of sanity in her efforts to solve this mystery. It makes me think of haunted houses as the literal interpretation of “sitting in your feelings.” Therapy often makes you feel worse before you feel better, and Lauren is very much in the throes of that. Her visions are more clear, but her day-to-day becomes spotty, confused, disjointed. In her final visit to the past, Lauren sees the brothel in full, red light. She learns about the last night it operated. Leland, son of Colonel Lebrun, wanted to marry one of the women, named Rose. They lived in the brothel with their young daughter who is…you guessed it: Lauren. The Colonel sent Frank and Abner to the brothel to kidnap the baby, but the henchman unleashed a bloodbath of senseless murder instead. “We’ve avenged our deaths through you,” explains Florinda. Okay, yeah, I like that twist, but was it so secretive that we couldn’t even give Lauren a heads up we were using her mind as a conduit of vengeance? 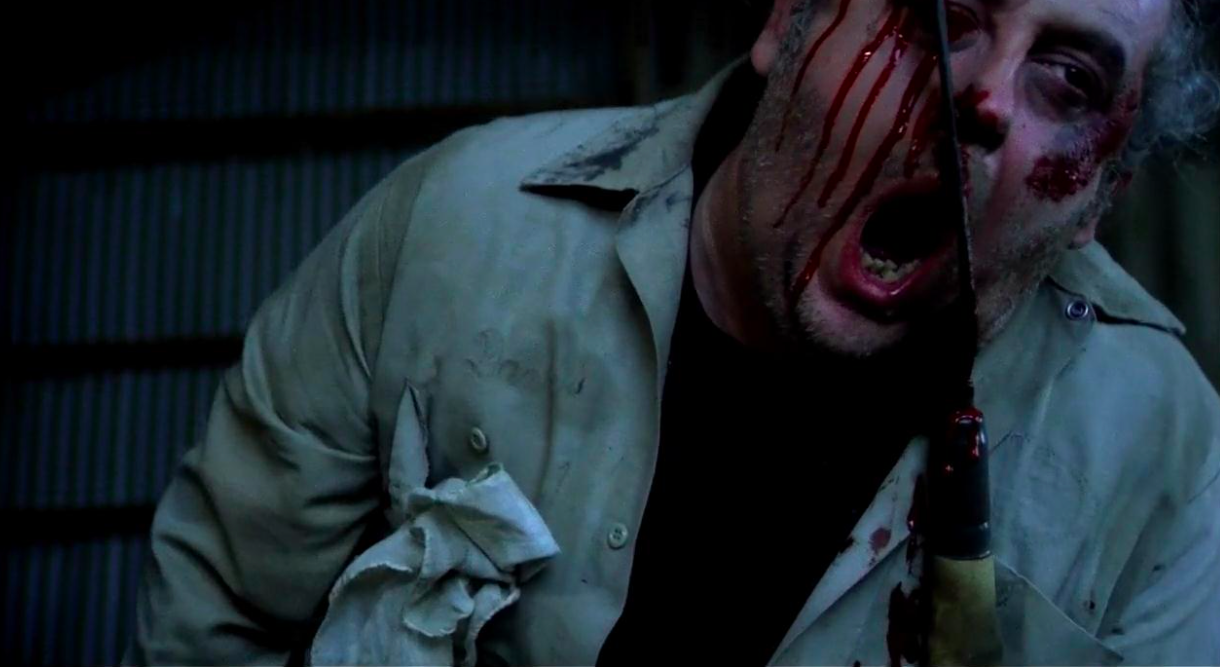 Final Thoughts: Why is it that studios only want to remake successful films? THE NESTING feels ripe for a remake. It has a compelling narrative executed less-than-perfectly, and with some revisions, it could make for an exciting slice of elevated haunted horror. While some supporting characters may offer anti-therapy remarks, the film is majorly pro-therapy at a time when most of the world wasn’t. The inclusion of sex workers as the good guys is also a novel concept. It neither doesn’t seek to be a morality tale nor exploit these women for the legitimate work they’re doing. Haunted houses and the spirits within gaslight their inhabitants, casting doubt, paranoia, apprehension, creating a world where sleep is not a place of rest but instead another outlet for madness. With evocations of Eleanor from Shirley Jackson’s The Haunting of Hill House, THE NESTING is a flawed entry into the haunted house subgenre, but an unexpected champion of therapy, mental health, and sex work.