The “Killbots” Will Vaporize Your Quarantine Blues

A month into lockdown, my friend Charles and I started watching movies together every night. This involves a now streamlined system of hitting play at the same time from our separate homes and texting for pauses whenever someone needs a bathroom break or a whisky refresher (me). We almost exclusively watch horror movies with him choosing the latest releases from Shudder and me wanting to watch Hellbound: Hellraiser II every time. For a week in August, I was banned from picking any ’80s films. Luckily, we alternate picks. I suggested we watch Chopping Mall, a movie I told him I saw before, claiming all I could remember was that it was a slasher in a grocery store. 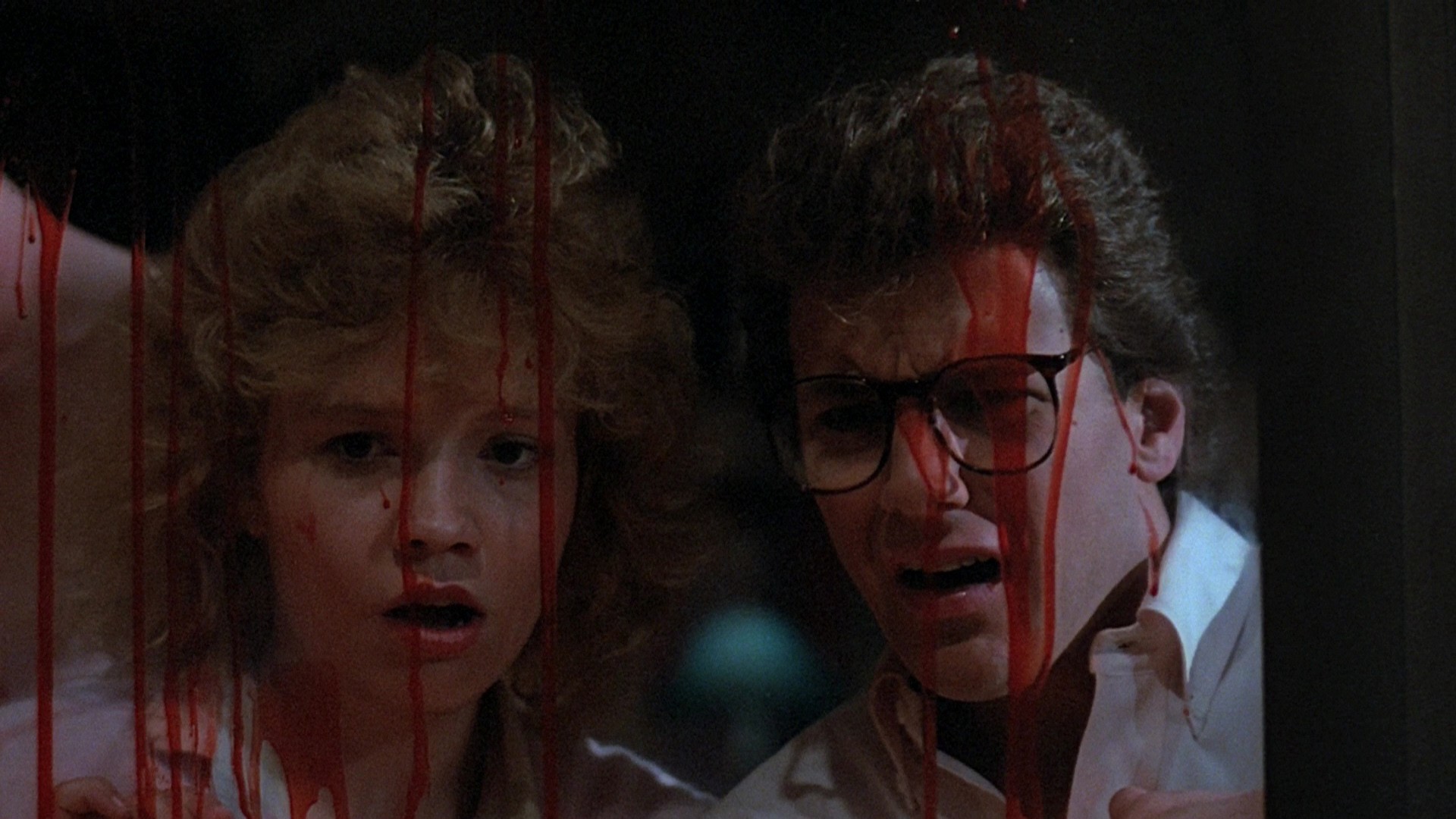 I don’t know why I thought it was a grocery store horror movie. I’m still convinced a supermarket slasher exists although I couldn’t find it (if you know of this film, please write to me, I’d like to see it again and confirm I did not hallucinate the entire experience). But we’re not talking about grocery store murders, we’re talking about CHOPPING MALL. Originally called Killbots, the film stars Kelli Maroney, Russel Todd (Friday the 13th Part 2), and Barbara Crampton (You’re Next). Running time: 76 minutes (honestly, the perfect length).

The Park Plaza Mall introduces three shiny, new, protective robots designed to prevent all-important mall crimes. They are, we are told, harmless. We are also told that “absolutely nothing can go wrong.” If you’re ever wondering what Return to Oz’s TikTok would look like if given a Grease baddie-style transformation look no further than these robots. BUT WAIT. Lightning strikes the mall (I hate when that happens), and the robots turn into murderers! Although the mall is closed, eight of the young employees decide to stay and throw a party in the furniture store. Furniture store = lots of beds for canoodles.

As much as I want to laugh at The Big Party happening in a furniture store, I fully would go if invited. Does CHOPPING MALL exist in the same universe as Stephen Sondheim’s musical-in-a-mall Evening Primrose? I wish.

This movie is probably why parents and the Pentagon were so afraid of Furby. But just like the four Furbies I owned growing up (one for each of the friends I did not have), I found the Killbots entirely adorable. And, might I add, their manners are perfection. After a murder, a Killbot will declare, “Thank you and have a nice day!” I will have a nice day. Thank you!

Our resident Hot Girl (Suzee Slater) shags the Jock (John Terlesky) in one of the many beds in this mall. She demands the Jock buy her cigarettes, a brand called Virgin Lights, before they can continue their adult cuddles in a scene reminiscent of Lynda’s “Get me a beer” moment from Halloween. Hot Girl says, “When I’m happy, everyone’s happy.” I like her energy. I almost reached for one of the two emergency cigarettes I keep in a drawer behind several bottles of essential oils. Jock goes to fetch her cigarettes from a glorious invention called a “cigarette machine” that I vaguely recall from my youth.

His death is an exciting moment of equal-opportunity exploitation because he is killed in the semi-nude which makes the film feel less overtly problematic through a 2021 telescope. I was recently talking to a friend who said he didn’t like horror movies because he couldn’t stand seeing women being chased. This problem did not occur to me as I’ve spent my entire life pretending I’m Jamie Lee Curtis or Neve Campbell in the final chase scene (a bold assertion when we all know I’d be the first kill).

Hot Girl goes to find her Jock and her cigarettes. She happens upon the CLEARLY DEAD Jock, and yet she tries to shake him awake, telling him how she doesn’t, “need his shit.” I really admire her self-respect. If the man I had just banged in a mall was lying dead on the ground I would gently stroke his shoulder and whisper, “I’m so sorry to disturb you, but was it something I did?”

These teens go to the MOST BORING STORES. Furniture store, department store, paint store. Scoff! Where are the video and comic book stores? The Lost Boys may not be the greatest movie ever, but its seaside amusements and boardwalk are outfitted with an amazing comic book and video store I could absolutely spend the rest of my life inside. When presented with danger, Our Dumb Kids band together. Their survival is not politicized. In horror movies there is often clique-branching: jocks and nerds, stoners and cheerleaders, blondes and brunettes (absolutely no redheads allowed). Maybe this is my quarantine year (and then some) talking, but the camaraderie was refreshing. 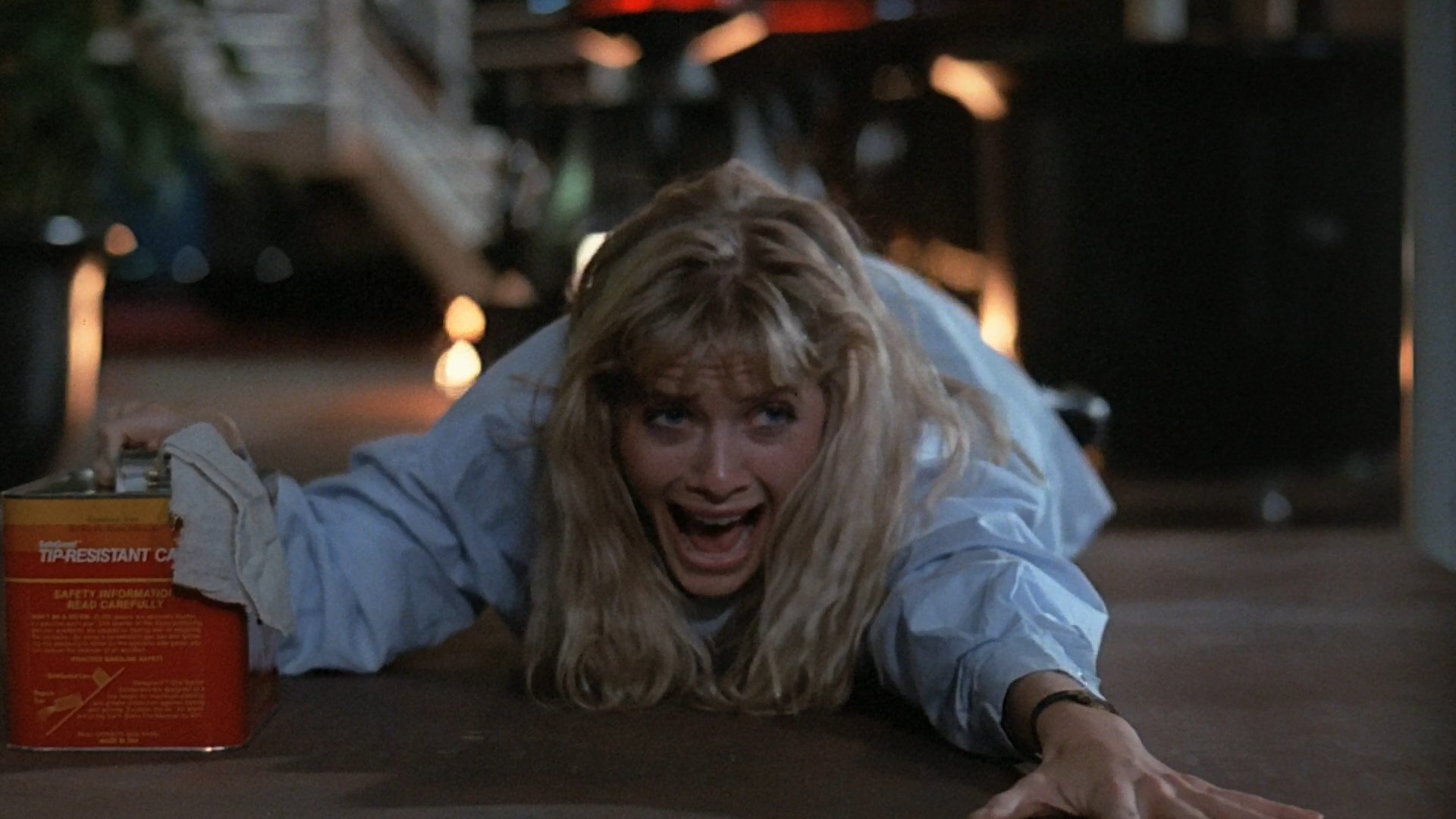 Final thoughts: I was so happy this movie stayed horror. I was nervous robots would lead us down a murky hallway towards science fiction. The nudity is minor. In fact our Final Girl spends most of the film in a pink sweater vest I might have searched unsuccessfully for on eBay.

I do wish they found weapons more tailored to the mall experience. These kids procure guns, flares, and medium-sized cans of gasoline. If I was trapped in my childhood mall I would be too busy stealing all the clothes from Abercrombie and Fitch to search for weapons (I’m not proud of this confession). When the Killbots inevitably arrived to do murders I would have no other weapons available to me besides the Abercrombie cologne which still haunts my dreams and nasal passages. I would douse myself in cologne then seduce the Killbots into letting me join them as a “fashionable” Renfield.

Alas, that is not how the film ends. Instead, Allison (Kelly Maroney) lures the final Killbot into a paint store and throws a flare, blowing him to robot bits. Moment of silence for Killbots.