“Tentacles” Tries (And Fails) to Put the Love in Lovecraftian

This is the first episode of “Into the Dark” I’ve ever reviewed for this column. There is a reason for that.

I find that, despite what I believe is a need for something like “Into the Dark” to exist (an anthology horror series with episodes releasing monthly centered around holidays? Sign me up!), I’ve found that on my own time, much of the “Into the Dark” backlog ranges from entertaining if mediocre to soul-crushingly disappointing. I’ll never forget my first viewing of Uncanny Annie, which squandered its “horror Jumanji” concept with unlikeable characters and a complete lack of anything remotely thrilling. (New Year, New You was surprisingly solid though.) I decided to review TENTACLES, however, because it’s been a minute since I’ve seen anything from the series, and I was hoping that TENTACLES, which bills itself as a Lovecraftian psychosexual horror thriller, might be something different. Might live up to its potential, as it were.

And like some of the other episodes Blumhouse has shat out over the last two years, it wasn’t horrible. But it certainly wasn’t good either.

TENTACLES follows Sam (Casey Dreideck) as he meets up with a strange woman named Tara (Dana Drori), who attends an open house, homeless and penniless. For reasons I still can’t fathom (because their chemistry is weak bordering on uncomfortable early on), the two sleep together, and then carry on a whirlwind romance the likes of which would be a featured on TLC. With neither character demonstrating much personality, they enter into a toxic, codependent relationship that does great things, on the surface, for Sam: lighting a fire under his ass and pushing him to follow his starving-artist dreams. Less great, however, is a tentacle that crawls into his ear late at night and whispers sweet nothings (just kidding, it’s totally eating his brain), and how, at every turn, Tara is being hunted by her stalker ex. Can you guess what’s going on? Can you guess how this ends?

The end of that synopsis is only half a joke, as the film’s twist should be immediately visible for anyone who sees horror movies on a regular basis. There is one wrinkle that makes the latter third of the film more interesting concerning the creature’s abilities, but it’s never really used to its full potential. Speaking of the creature, most of the CG effects are only on display in dark areas, and there’s a reason for that: what you CAN see of what this thing really is (and really that’s only a single fucking tentacle protruding from a stomach) looks low budget, and not in a good way. Seriously though, I was expecting some Cronenbergian body horror, or maybe some Clive Barker shit, as this movie markets itself as an erotic thriller. We get none of that. The only thing this creature really does is gaslight, which any piece of shit human can do.It’s not that interesting, and it’s a complete misuse of the films core concept. 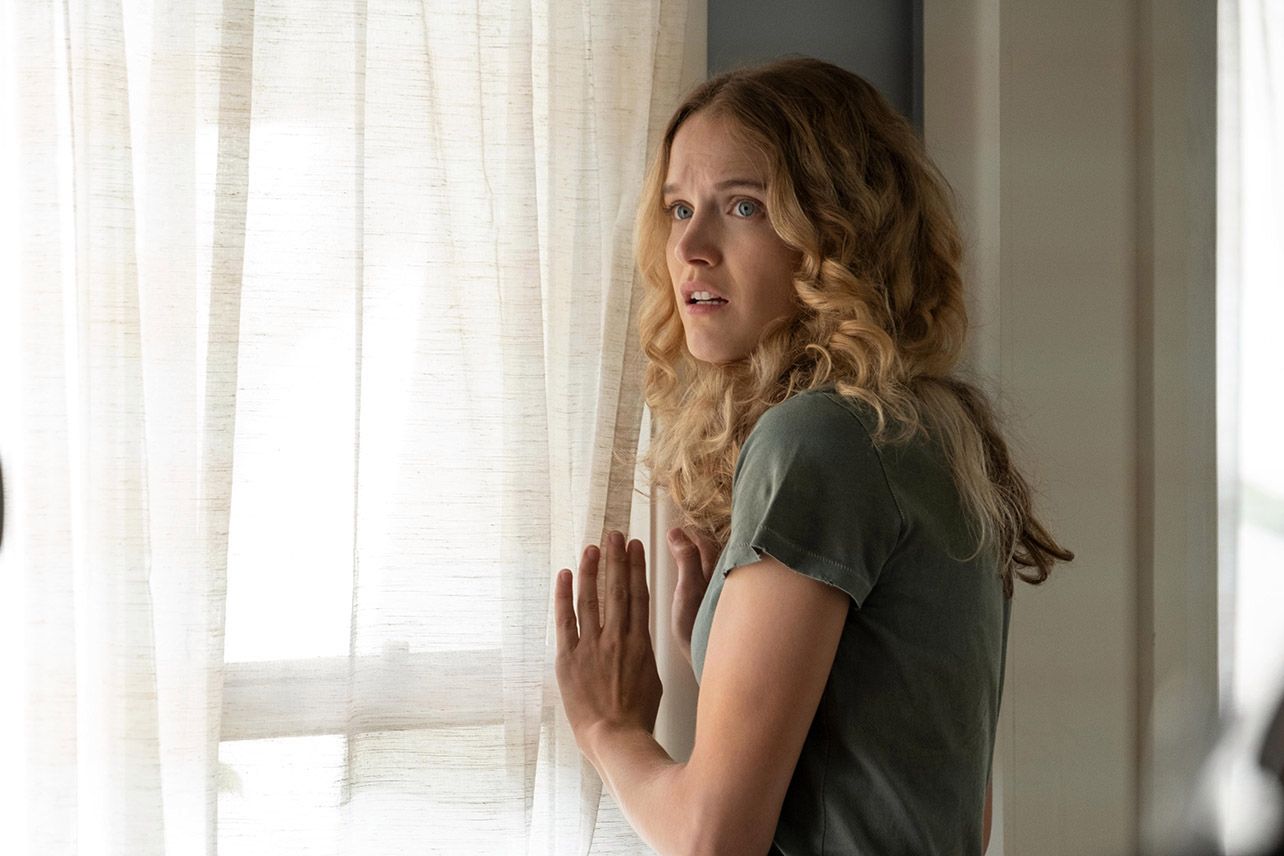 Which is the other thing here: the core of this film, the thing that’s supposed to sell the horror of it all to you, is the relationship. And the relationship on display here SUCKS. It’s shallow, blatantly toxic, and is made up only of frequent sex and “what’s your deepest fear” conversations. Maybe it has to be, given the reality of what this creature is and how it operates, but there isn’t enough of either character here on display beyond those two traits to make Sam’s fast fall for Tara remotely believable. My girlfriend and I watched this together, and before she fell asleep (this film can be a tad slow) she was laughing her ass off at how awkward and unbelievable every facet of this relationship was. And they provide a half-assed explanation for Sam’s instant attraction the last third of the film through exposition at a dive bar, but if you’re going to try and fill a hole this big with a “but pheromones though,” then… well, fuck off. This is supposed to be a believable, if quickly progressing, relationship. It isn’t. I understand that Sam is literally dating a shell of a human being filled with ONE SINGLE TENTACLE, but considering how long this film attempts to misdirect us with the stalker angle, trying to make us sympathize with Tara and not see her as the threat, I’m going to choose to believe that the flaws in their relationship are not intentional, but a not-so-happy accident.

It probably sounds like this film hurt me, and it didn’t. If I was getting drunk with my friends on a Sunday night and this came on, I probably wouldn’t have switched it off even if I couldn’t remember the plot thirty minutes later. I can even see a version of TENTACLES that pushes itself harder, that gets more graphic and has a believable relationship at its heart. I might even come to love that film. But this column typically celebrates intelligence and craftsmanship, or excess and cheese, A24 and Troma films alike. Mediocrity just fucking stings, especially when there are far better films like After Midnight or, fuck, Nina Forever that do much, much better jobs exploring the horror inherent in relationships. And while the cinematography is generally above average and Drori and Dreideck do their best with what they’re given, nothing about TENTACLES really stands out, making it, along with some choice entries from the “Into the Dark” catalog, an excellent film to fall asleep to.

James Tucker
AHH! Who gave the intern a keyboard? James Tucker has no qualifications to speak of, aside from being an English major and a lifelong horror nerd. In addition to writing the column “Streaming Semetery” for Rue Morgue, he is also an editing intern for Crystal Lake Publications and has also acted as an editorial assistant for the University of Central Florida’s Journal of Wyndham Lewis Studies. In his spare time, he conducts undergraduate level research on horror films and writes his own (terminally shitty) horror fiction. (A real party animal, this one.) Since that’s about the extent of his achievements so far, he would also like you to know he’s a huge GHOST fan and his favorite horror movie is Hereditary.