Murder, mystery and monsters collide in Hulu’s newest docuseries, SASQUATCH. Recently debuting its first episode at SXSW 2021, this original 3-part series follows investigative journalist David Holthouse as he digs into his own personal Bigfoot tale. While working on a California pot farm in 1993, Holthouse overheard a frightened fellow worker explain how three men were murdered out in the field by a rampaging Bigfoot. Unable to shake the story, Holthouse decides to pick up the case decades later and quickly finds out that monsters can take many forms.

Directed by Joshua Rofé (Lorena, Swift Current), SASQUATCH starts out in traditional true crime doc fashion. As Holthouse sets the stage and provides crucial backstory from a comfy, dim lit cabin, evocative comic book-like animations fill in the visual gaps. However, it becomes clear quite quickly that this is a true crime series unlike any you’ve seen before. After all, the villain in Holthouse’s story is none other than North America’s most notorious cryptid. 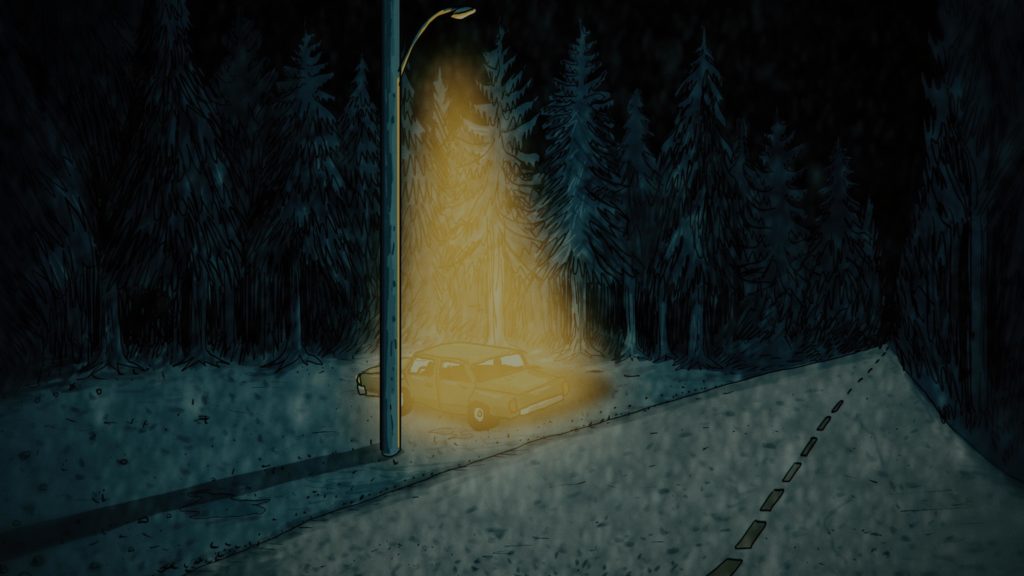 It’s here at this odd intersection of circumstances that SASQUATCH will have cryptid fans and true crime enthusiasts drooling. Not only are the ever popular true crime elements present, there’s also a California counter-culture history aspect and most importantly, ample cryptid chatter. Along with Holthouse himself (who has a fascinating professional resume), interviews include a wide range of individuals from extremely varied backgrounds. Everyone from skeptics to scientists, bystanders and believers have their own personal connections to Bigfoot and the underlying crime coursing through SASQUATCH’s runtime. Interviews even include Bob Gimlin, the man responsible for the most famous Bigfoot film of all time — the 1967 Patterson-Gimlin film.

While at times the episode feels a bit fragmented in its effort to introduce all the disparate key elements at play, it would be unfair to hold this against the entire series. As only the first episode has been made available so far, it’s easy to assume (fingers crossed) that the pieces will all come together in the remaining two segments. If the Duplass Brothers previous Netflix documentary series Wild Wild Country offers hope as a frame of reference, it’s safe to say that SASQUATCH is in good hands.

As the episode concludes, Holthouse nabs his first bit of confirmation that his efforts are not only warranted, but attracting attention. After finding a witness who can independently corroborate his fuzzy memory of the incident, the entire investigation cranks up a notch. Circling back around to the homicides that kick-started this whole series, the episode ends on a doozy of a cliffhanger: successfully whetting the appetite while remaining beautifully vague as to where this journey is heading. SASQUATCH is unquestionably a binge worth keeping your eyes open for.

SASQUATCH will be available exclusively on Hulu April 20th, 2021.

Rachel Reeves
Rachel is a record store nerd from Boise, Idaho with an obsession for horror soundtracks and all things creepy.