Paging Mark Duplass. I heard you were looking for a plot for “Creep 3.” Have you ever seen THE RANGER? I get the feeling you might like it…

You ever just get in the mood for something stupid? Like a horror flick you know probably won’t be the greatest thing ever, but something where you can turn your brain off and just escape? We have the Friday the 13th films for that now of course (Shudder added the first 8 recently, and I desperately need to sit down one night and just binge them all), but I was looking for something closer to the filmic equivalent of Jack Ketchum’s “Red.” A gritty, emotionally rewarding revenge tale where I could get invested in the story and laugh as the antagonist meted out justice on the horrible, horrible protagonists. I didn’t quite find that tonight (and feel free to suggest some flicks in the comments if you think you have something I need to see, by the way), but I had fun with THE RANGER nevertheless.

THE RANGER starts with our characters hanging out at a punk show, doing drugs and moshing until the cops show up and bust them. A cop catches our main character, Chelsea (played by Chloë Levine), and her boyfriend Garth (played by Giaco Furino) decides to be a macho man and “save his girl,” stabbing the cop and severely wounding him. They manage to get away by stealing a van that belonged to one of the other punks and decide to hide out in the mountains, as Chelsea’s uncle owned a cabin there before he suddenly (and violently) passed. On the way up there, they meet the Ranger (played by Jeremy Holm) who tells them they can’t stay at the cabin because the government shut the park down. When they refuse to listen to him, he warns them: these are his mountains and they need to make sure they follow the rules. Of course, they don’t. And guess what motherfuckers? It’s hunting season.

“Like Friday the 13th, THE RANGER is about a legalistic killer punishing kids who step out of line.”

THE RANGER was, on its surface, exactly the kind of movie I was looking for. I wanted to see a bunch of dumbass teens get slaughtered by a killer who spits one liners and has a cartoonish, overexaggerated personality; on that front, it doesn’t get much better than religiously quoting park regulations while chopping a motherfucker in half, or telling someone not to swear before blowing a hole through their stomach. I was hoping to see something new brought to the table, something more in the style of “Behind the Mask: The Rise of Leslie Vernon,” but this isn’t a meta slasher; it’s more directly in line with the tradition of the films like “Friday the 13th,” with a legalistic killer punishing teens who step out of line. And to be fair, while the filmmaker does add dimensions to these characters that make them pitiable (except for Garth, FUCK Garth), they do step WAY out of line, trespassing on land the government had closed, spray painting trees, and setting fires. By every standard of horror movie logic, these kids deserve to die. The kills themselves aren’t the most creative, with the Ranger using pretty typical slasher fare; what makes them entertaining are the Ranger’s monologues and one-liners, which are legitimately funny at times and make the character out as the most outrageous caricature he could have been. 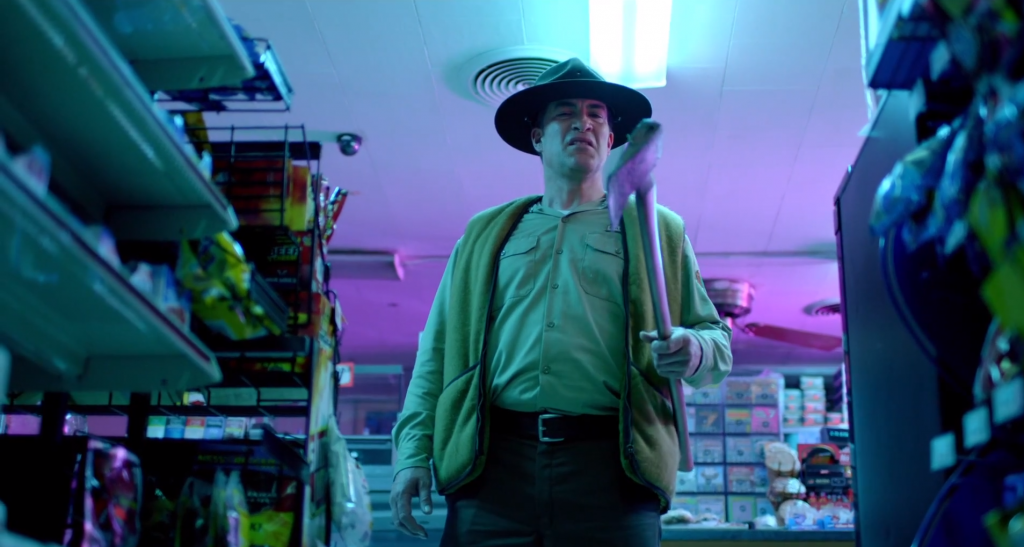 The twist, if you can call it that, is in the Ranger’s relationship to Chelsea, a relationship that gets teased from the very start of the film and gets expanded upon throughout. It was interesting, and I think it added a dimension to the Ranger’s character that I needed, as well as providing some much needed information about Chelsea’s psychology; it also felt like a plot point that needs to belong in the “Creep” film series, if it doesn’t already. It’s not that it was bad by any means so much as it was familiar, and while I ordinarily would have appreciated the attempt to transition into another subgenre, I think in this context it wasn’t done well enough to make the film feel like an original work.

Listen, I enjoyed watching this film, and I recommend it if you’re looking to see some dumbass horror movie kids get murdered. But is it one of my favorite things I’ve seen on Shudder? No. I’m giving this one a 6 out of 10. It’s worth a watch, but maybe wait to see it until you’ve had a couple drinks and a long day at work. You might get more mileage out of it then.

Also, don’t watch the trailer unless you want to get things spoiled. You’ve been warned.

James Tucker
AHH! Who gave the intern a keyboard? James Tucker has no qualifications to speak of, aside from being an English major and a lifelong horror nerd. In addition to writing the column “Streaming Semetery” for Rue Morgue, he is also an editing intern for Crystal Lake Publications and has also acted as an editorial assistant for the University of Central Florida’s Journal of Wyndham Lewis Studies. In his spare time, he conducts undergraduate level research on horror films and writes his own (terminally shitty) horror fiction. (A real party animal, this one.) Since that’s about the extent of his achievements so far, he would also like you to know he’s a huge GHOST fan and his favorite horror movie is Hereditary.