What’s the best costume party you’ve ever been to? Depending on the eccentricity of your friends and colleagues (and whether or not the embarrassing “Sexy Nurse” showed up) it’s likely somewhere between a light romp and a complete dud. Whatever the case, it can’t prepare you for Theatre Bizarre.

Music, burlesque, suspension artists, freak shows and too much more to comfortably list will crowd eight floors of Detroit’s Masonic Temple for this year’s edition of the not-unreasonably-boasted “Greatest Masquerade on Earth”.

Rue Morgue spoke with founder and creative lead John Dunivant about the vision behind the masquerade spectacular.

1. Theatre Bizarre is in its seventh (legal) year. What’s the story behind “the Greatest Masquerade on Earth”?

Theatre Bizarre is in its 7th year in its current incarnation, but it’s actually been around for 17 years. The first 10 years, we ran an entirely illegal amusement park in a neglected neighborhood in Detroit surrounded by crack houses.  We could get away with anything, and so we did.  Under the cover of gun fire and in the midst of the drug wars, we kept expanding and taking over burnt out lots.  We had a roller coaster, a ferris wheel, underground tunnels, a frontier land, multiple stages, flame throwers, it was insane.  And it was absolutely beautiful.  But, because we were completely illegal, eventually the governor of Michigan found out and called the mayor of Detroit.  He was so embarrassed and upset that we’d been building a theme park for ten years, that he sent in SWAT teams, the Fire Marshall, the Chief of Police, everybody, and they shut us down hard.  18 hours before our doors opened that year.  It was brutal.
Theatre Bizarre is also a massive, immersive art installation on a spectacular scale.  It’s very hard to describe. 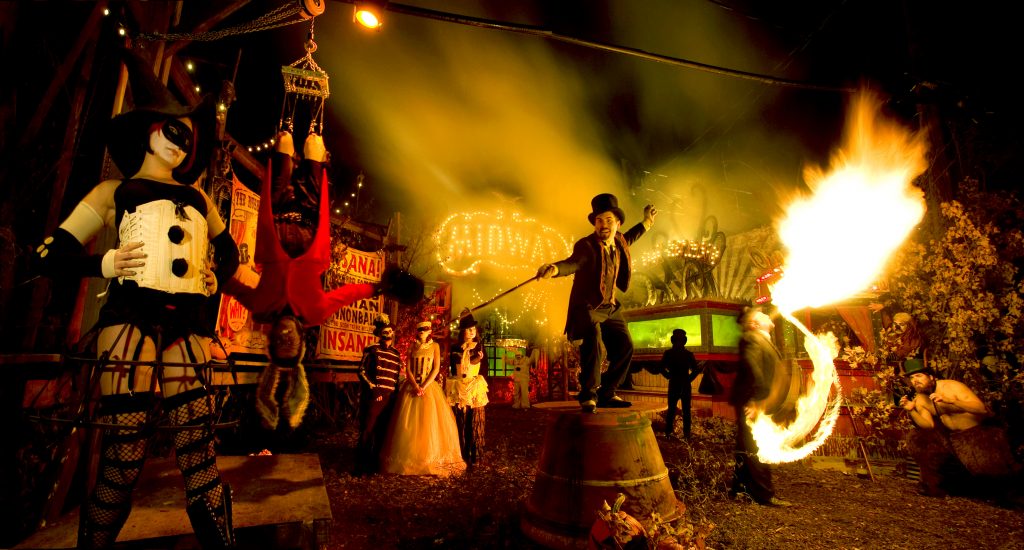 2. The masquerade takes place through eight floors of Detroit’s massive Masonic Temple. Is there any significance to the location?

This event could only happen in Detroit, so after we were caught and brought out into the open, we still wanted to keep it in Detroit.  When an opportunity to move into the world’s largest Masonic Temple presented itself I jumped at the chance.  The architecture of the building is absolutely amazing and the mystique of secret societies was an easy draw.  At the time, I was already incorporating iconography of these hidden organizations in my artwork and I was ready to open a new chapter in this ongoing story. With the labyrinth like hallways and confounding construction, it’s the perfect new home for this particular form of world building.

3. You’ve been pretty strict about masks and dress codes: No character/monster/zombie/hero/novelty costume or related masks. Why is it important to preserve Theatre Bizarre’s aesthetic?

That rule is for the Masquerade Gala only, but the aesthetic is one of the most important aspects of the entire event. We are obliterating the fourth wall of theatre and the line between the patron and the performer is blurred.  Our guests are encouraged to lose themselves in the anonymity of their costume and these costumes are the final piece that brings this multi-layered world to life. This is a deeply immersive event with costumes being an incredibly important part of that immersion.  No matter where you look, no matter where you go, there is nothing to pull you out of the immersion.  People often describe it as a lucid dream.
And now, more and more guests are incorporating the specific design guides, the limited color palate, and the general feel of Theatre Bizarre into their costumes, creating their own characters that seem as if they’ve been birthed of this world.  The line between reality and fantasy continues to blur.  It’s awesome. 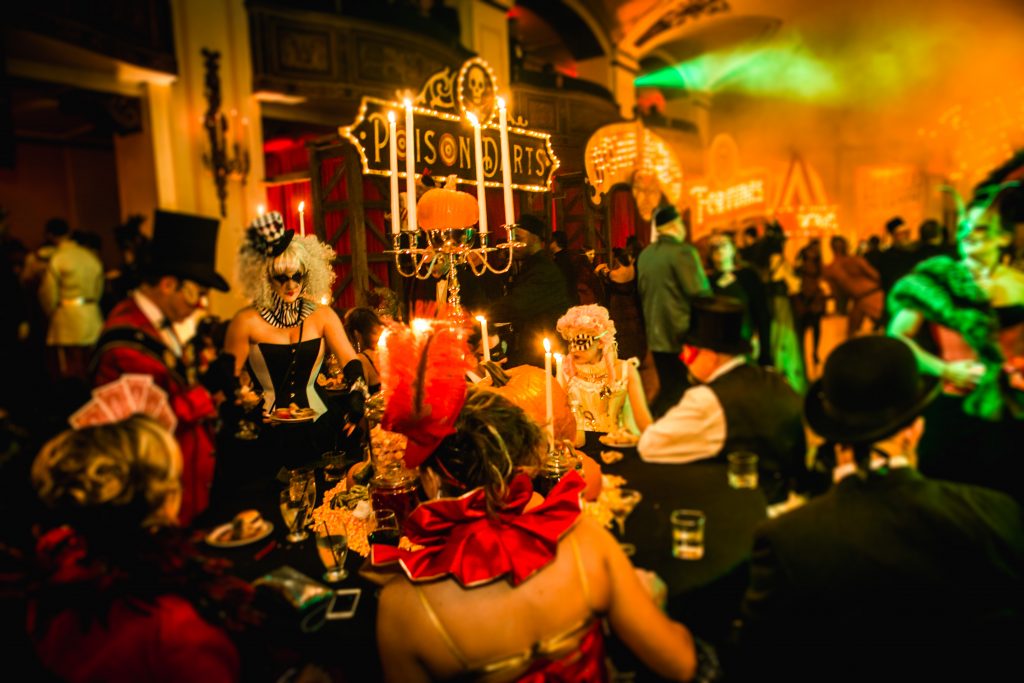 4. This year’s theatre boasts the usual events on October 14th and 21st, as well as “preview” galas on the 13th and 20th. What’s the difference between the two?

The Gala is a formal masquerade and a much more intimate and curated gathering.  The night is kicked off by the Theatre Bizarre Orchestra in the formal setting of a grand ballroom where the first course of the evening’s meal is served alongside an open bar. Performances are happening all around as we merge into a New Orleans style funerary parade lead by a marching band to begin a guided tour of what the rest of the 8 floors have to offer. This night is an exclusive ticket limited to only 450 people.  It’s magical, decadent, and overwhelming.

The Saturday night event has all 8 floors open simultaneously for 9 hours straight.  It is a choose-your-own-adventure on an unprecedented scale.  There is a train ride on the 7th floor, a Victorian Ice Cream parlour, a movie theater playing turn-of-the-century horror and erotica, there are 6 main stages, 19 performance spaces, but every hallway, and every lobby can become an impromptu theatrical experience.  There is burlesque, boylesque, sideshow acts, and fire performers.  There’s vaudeville, illusionists, aerialists, acrobats and circus performers of all kinds.  There’s a fetish lounge, secret rooms, and suspension artists. Over 20 bands perform with styles ranging from punk, rock, and funk.  A marching band, a jazz trio, swing DJ’s, a barbershop quartet and so much more.  It’s absolutely crazy and you can’t possibly see it all in one night.  This night is open to 4,500 people.

5. The list of attendees and performers is growing every year, as is the press coverage. What are your plans for next year?

We’re so entrenched in the current year’s production that it’s nearly impossible to say what next year may bring.  This is a very organic process and always in motion.
As far as this year goes, we’re working on some major expansion of some rooms, more secret places to discover, new and spectacular sets and more ground breaking performances. We were always topping ourselves, and adding more and more layers to the spectacle 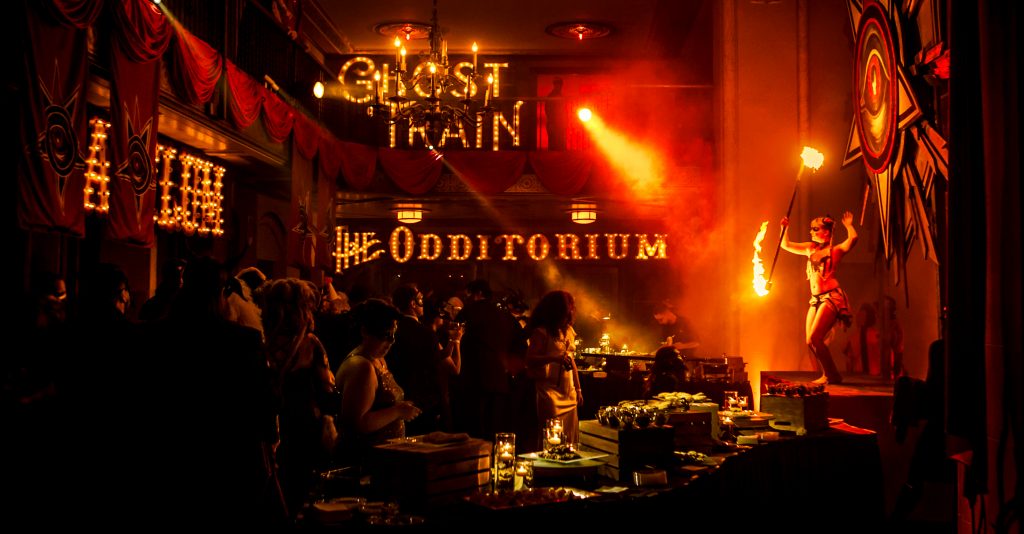 6. If there was a guiding ethos or principle to Theatre Bizarre, what would it be?

We started out as a group of friends and family trying to build something that is unlike anything else in the world. That thought continues to push us. Building worlds is intoxicating.

7. What’s your favourite installment/performance? I’m sure there’s a lot to choose from.

It’s been an insane journey getting here with so many ridiculous things along the way, but off the top of my head one of my favorite things was seeing an act that I created come to fruition as The Devil’s Tightrope. Working with a group of suspension artists, I was trying to integrate what they do into a circus act and decided to push the limits of what they called a “tug of war”. This is where two or more people are facing away from each other with shark hooks piercing the flesh of their back and a rope attached to the hooks, as both sides pull in the opposite direction. I wanted to see if their flesh could support a tightrope walker on the line between them, when we realized that this was possible we upped the performance by lighting the rope on fire. Every time I see this act still, with blood running down their backs and clenched teeth, I am absolutely amazed.

Tickets to both the Gala and the main event are available here, and you can keep up to date with Theatre Bizarre on Facebook, Twitter and Instagram.