GREAT WHITE (which just joined the Shudder lineup) is the latest entry in the rarefied sub-genre known as shark horror. In his feature directing debut, Martin Wilson takes a nuanced script by Michael Boughen about five people who find themselves hunted by man-eating sharks off the coast of Australia and delivers a better than average aquatic horror film. Any successful shark attack movie lives and dies based on two elements: engaging human characters and believable effects. GREAT WHITE has one of those things. Led by Katrina Bowden, the talented cast brings emotional depth to the story, but there’s never a moment when it feels like they’re in the presence of a real shark. An overreliance on CGI effects and clunky attempts to imply a lurking threat fall flat, making it hard to ever really buy into the terror supposedly lurking beneath the waves. 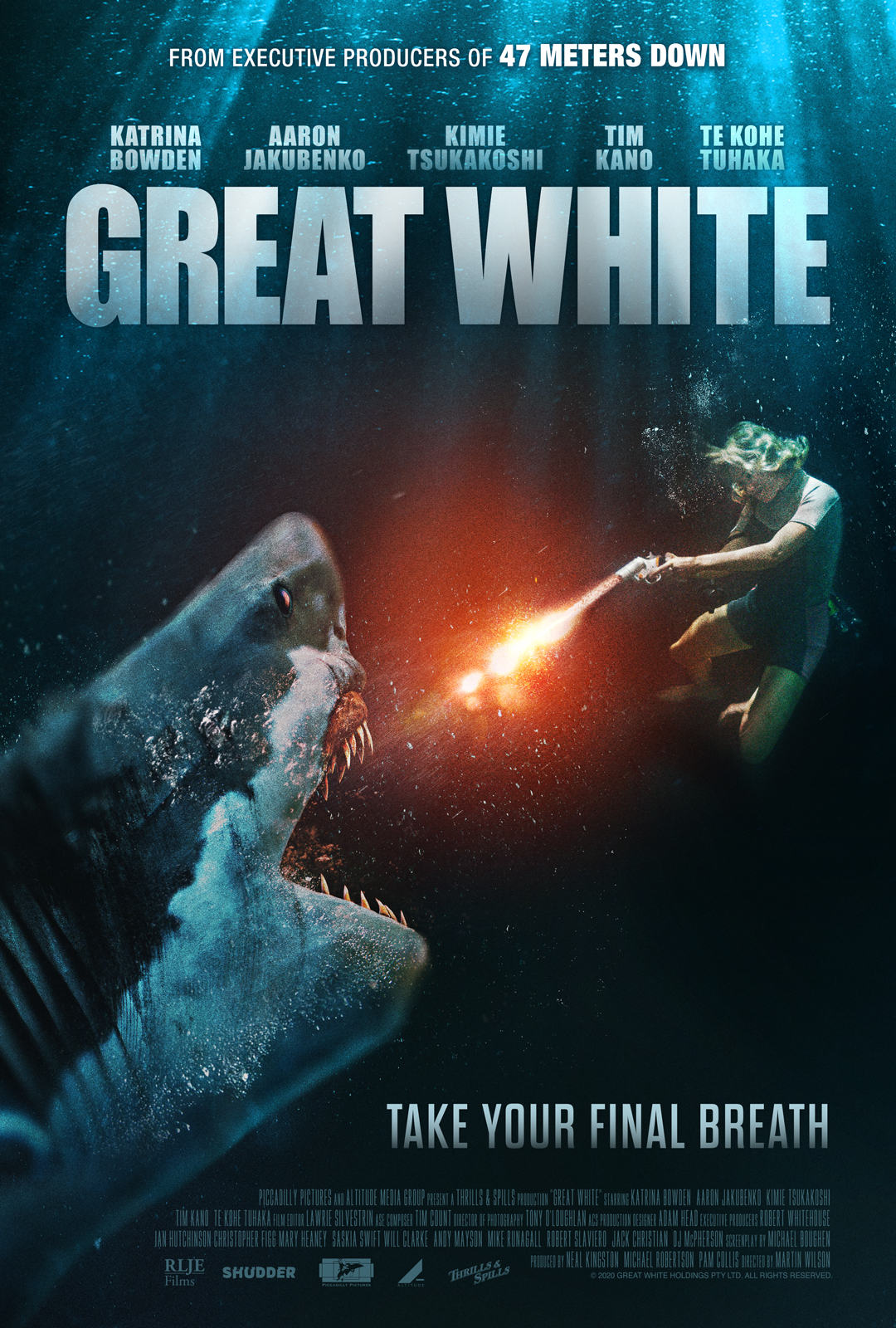 Charlie (Aaron Jakubenko) is a floatplane pilot who owns and operates a charter business with his newly pregnant girlfriend Kaz (Bowden). Along with their cook Benny (Te Kohe Tuhaka), they accept a charter from a wealthy couple, Joji (Tim Kano) and Michelle (Kimie Tsukakoshi). The descendant of a local legend, Michelle is on a mission to spread her grandfather’s ashes at Hell’s Reef, the scene of a tragic shipwreck in which he was the only survivor. Once they arrive, they find the partially eaten remains of a man on the beach and attempt to save both his companion and themselves from the two giant sharks lurking off the nearby shores. It’s a relatively straightforward water disaster tale strengthened by good characterization and a talented cast. Wilson’s pacing is effective as well, given that the film’s second act essentially takes place in a single location. Boughen’s script keeps the action moving even when the characters are not.

Bowden is a solid, if understated, lead as a triage nurse nervous to bring a child into an uncertain financial future. She and Charlie have believable chemistry and feel like a real couple struggling to make ends meet. Joji and Michelle, on the other hand, seem mismatched and unhappy from the start. Kind and thoughtful Michelle seems disconnected and even embarrassed by the angry and jealous Joji, constantly apologizing for his abhorrent behavior. Though Kano does a fine job with what he’s given, the character itself feels poorly written and lazily fleshed out. He is the catalyst for several major events in the story, but nothing he does feels particularly believable. Joji often feels more like a plot device than an actual human being. Michelle seems much more suited for the level-headed Benny, and it’s difficult not to root for Joji to die so the two can be together. 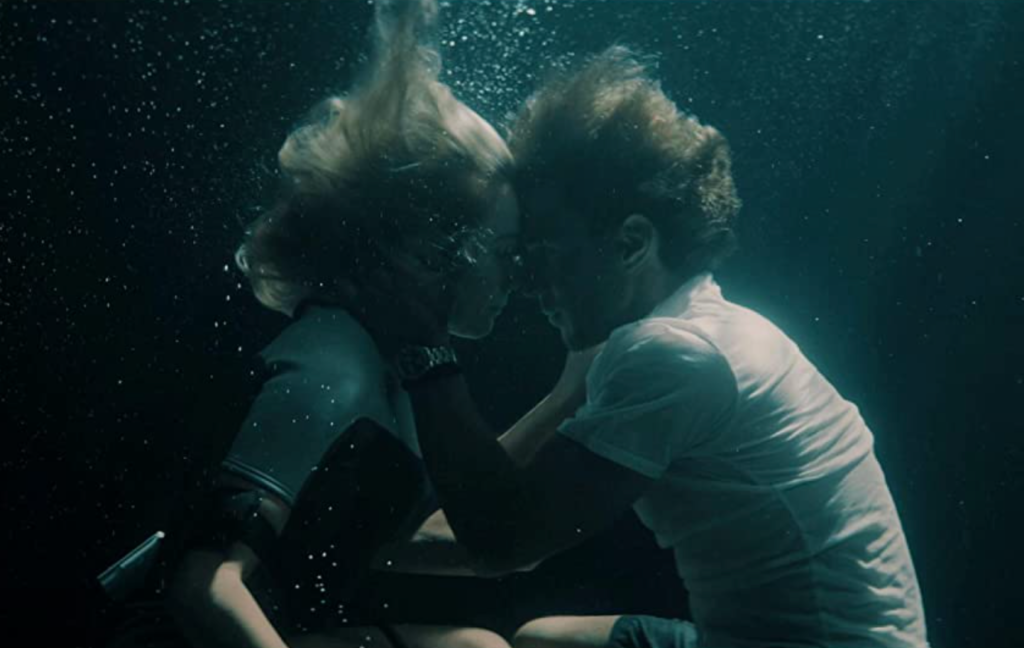 Though the human drama is strong, the biggest issue hindering GREAT WHITE is its lack of believable effects. Underwater shots of the actors are clearly shot in a tank and feel disconnected from the rest of their scenes. Camera angles intended to imply the shark’s underwater presence feel forced and derivative. Two standout sequences in the film’s final act are thrilling, but CGI still keeps them from ever feeling quite believable. Scenes of approaching fins are effective but, aside from the climactic shark showdowns, they are the only moments where the danger is even remotely believable. A pivotal scene early in the film involves a shark clearly constructed from CGI, making it difficult to ever really take the threat seriously.

But Wilson does the best with what he has, keeping most of the shark action beneath the water’s surface and most of the plot in the dialogue. Unfortunately, this results in some anticlimactic death scenes. Characters are unceremoniously dragged beneath the waves never to be seen again. At times it’s unclear if they’re actually dead, having been dispatched by the briefest of bites then dragged off-screen or underwater. But Martin is once again saved by his script and a solid, if slightly implausible, conclusion. Resisting the urge to spell out each emotional beat, the sorrow felt for those who don’t make it to the beach only serves to reveal the depth of Boughen’s story.

Given its lack of believable sharks, GREAT WHITE is a lot better than it has any right to be. The characters are mostly well-drawn and their stories are captivating. Gorgeous scenery and a strong cast combine for a compelling human drama that happens to involve some deadly fish. The shark issue will likely come back to haunt the film, but the moments of cringy effects or clunky editing never really overtake the narrative arc. While GREAT WHITE will probably never rise to the upper echelons of the shark horror sub-genre, it’s a worthwhile watch for viewers willing to suspend their disbelief.