A somewhat forgotten anthology that anticipated the subgenre’s 2010s mini-boom, Severin Films’ THE THEATRE BIZARRE has finally been released by the company itself after a deal with the shady W2 Media cut off the project’s legs just as it was finding its audience. Rescued from an “unauthorized” 2012 DVD release by Image Entertainment, Severin has pulled out all the stops in presenting its original film in the best format possible with plenty features that show just how much genre love and thought went into this less-than-perfect but commendably ambitious and strange modern portmanteau horror effort.

THE THEATRE BIZARRE presents six macabre tales ostensibly inspired by the Grand Guignol – the infamous turn-of-the-century venue where plays featuring gruesome naturalistic violence were performed to the delight of its Parisian audience. The film kicks off with Richard Stanley’s (Color Out of Space) “Mother of Toads,” in which a couple find themselves find themselves subjected to the malefic influence of a witch. This is followed by Buddy Giovinazzo’s (Combat Shock) “I Love You,” wherein a woman’s spurning of her lover spells doom for them both. Sandwiched directly in the middle are “Wet Dreams” and “The Accident,” by Tom Savini (1990’s Night of the Living Dead) and Douglas Buck (Family Portraits: A Trilogy of America), the former concerning a man tortured by nightmares in which he’s castrated at the hands of his wife, the latter a ruminative piece on death sparked by a little girl’s witnessing of a motorcycle accident. The film concludes with “Vision Stains” by Karim Hussain (Subconscious Cruelty), about a writer/serial killer who extracts the images of her victims life directly from their eyes at the moment of death, and “Sweets” by David Gregory (Plague Town) which begins as the story of a breakup between two food fetishists and devolves into a splattery orgy of violence and death. Connecting each film is a framing narrative in which an ashen-faced, doll-like master of ceremonies (Udo Kier) and his fellow automatons perform for a lonesome waif (Virginia Newcomb) in an abandoned theater.

Gregory’s stated mission – to unite a collection of visionaries and let their imaginations run wild – sells the film, though the result is something less than the sum of its parts. Beyond the Grand Guignol theme (which is barely there to begin with) the segments have little connective tissue to unite them, and, one in particular (Buck’s “The Accident”) is certainly horrify-ing, but feels woefully out of place amongst such outré mayhem. Gregory and Savini meet the assignment pretty splendidly, turning in shorts that fully deliver the blood and guts, but the others feel as if they stray too far afield in both form and content, making it abundantly clear why anthology film segments are so often set up as morality plays which at least function as variations on a consistent theme, i.e. transgression and expiation or punishment.

If there is an overriding theme, it’s largely an unconscious one: male anxieties about women. The majority of the shorts feature cold, manipulative, or outright murderous wives, partners, and girlfriends, and this unsavory archetype crops up frequently enough that it may become a sore spot, depending on the viewer. The framing device is utter nonsense, with Kier delivering creaky bromides like “The power to write your own story is the power to define your life” with relish, but it’s easily the film’s most stylish and interesting piece and, to be frank, is often a relief to return to after the back end of THE THEATRE BIZARRE’s more highfalutin segments. 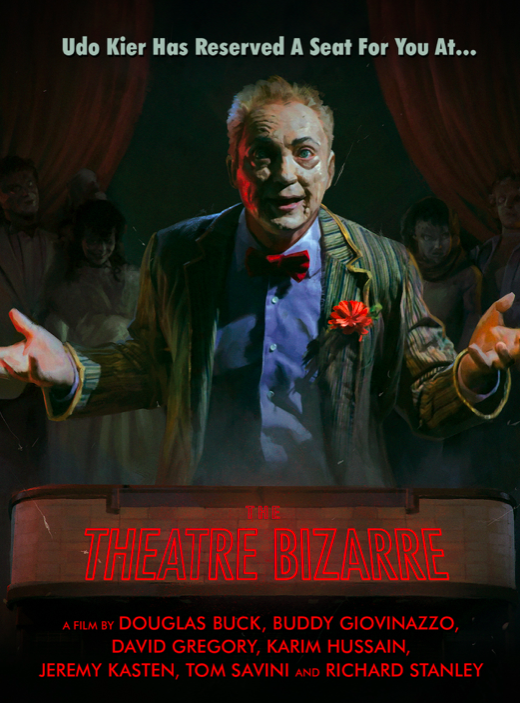 This transfer of THE THEATRE BIZARRE seems to be the same contained on the 2013 disc, and really, the digital visuals hold up. There is a notable instance of artifacting early on, but overall, the presentation is more than acceptable. The real draw here is the large selection of Special Features which include a new audio commentary featuring all seven filmmakers and a new feature-length documentary titled Backstage: The Making of THE THEATRE BIZARRE. This is a fascinating and worthwhile archival look at the work that went on behind the scenes, and the Severin team has also included pickup interviews with those involved to examine the long road to this release. Among the older or ported-over features are a second 2012 audio commentary, a French TV On-set Report on Richard Stanley’s “return to genre filmmaking,” making-of featurettes, and an extended cut of “The Mother of Toads.” Though this is all included in the standard edition, Severin’s Black Friday exclusive 2-Disc Slipcase Digipak is still available and comes with a limited edition soundtrack CD.

Haunted by a bungled release, it’s great to see THE THEATRE BIZARRE finally get its due from the very company that got it made in the first place. Though it’s nowhere near the top tier of anthology horror efforts, it’s an ambitious project that, appreciably, doesn’t pander to the casual horror fan. Both Severin’s standard and 2-disc Digipak editions of the film are chock-full of special features to keep you watching long after THE THEATRE BIZARRE’s curtain has fallen, and though, in large part, they’re more interesting than the film itself, they may just help you appreciate it for the rare bird that it is.