Search Out the Southern Sasquatch with Lyle Blackburn’s “TEXAS BIGFOOT”

The assemblage of cryptid lore is, and its custodians ensure that the countless stories of sightings and encounters are recorded not only for preservation’s sake but also to educate and inform researchers in their ongoing work to prove the creatures’ existence. The cryptids themselves are as varied as the regions from which they’re most associated, with reports generally framing the Sasquatch as native to the Pacific Northwest and Canada. RUE MORGUE’s rockstar researcher Lyle Blackburn knows better than this, as every sighting that comes out of the frigid environs of the Great White North is balanced with an equally interesting report from his own state of Texas. His latest book, TEXAS BIGFOOT: HISTORY, LEGENDS, AND MODERN ENCOUNTERS IN THE LONE STAR STATE, serves as the authoritative text on his state’s iteration of the legendary hominid. 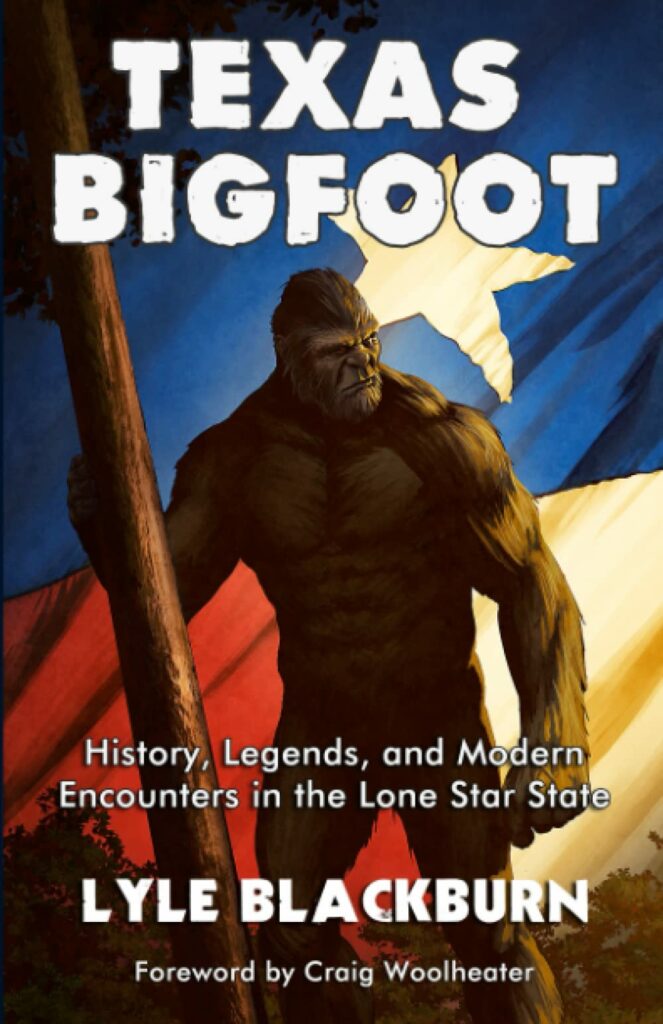 When discussing reasons for tackling the subject, Lyle states, “Bigfoot is usually associated with the Pacific Northwest, and there’s a proliferation of sightings in places like Ohio, but when it comes to Texas, people don’t realize how much history there is here and how many encounters have been reported. Most people’s perception of Texas is that it’s more like a cowboy landscape – wide open, sparse trees, ranches, places where horses run, and there is a lot of land like that. Texas is huge. But when you get over in the eastern third of the state, it becomes heavily wooded. Known as the Piney Woods, you have huge pine thickets that rise up. You’ve also got the coastal regions down on the Gulf Coast, and then the next state over is Louisiana, which is thickly wooded and swampy, a habitat where you would imagine a Bigfoot could live.”

Over the years, there’s been a lot of classic cases of these Bigfoot-like creatures that have been reported in newspapers; there’ll be a flap of sightings over a period of time and those become part of the record, Blackburn explains. “There’s also an ongoing log of reports that come in through either the Internet or researchers who concentrate on this area, and having been born and raised in Texas and being a cryptid researcher, a lot of this has come across my radar. Texas does have a lot of Bigfoot groups that have been on the ground and in the field for many years, kind of flying under the radar because you don’t think of Texas as being a place for Bigfoot, but these groups have been instrumental in fielding reports. I’ve been a part of some of those groups and there’s a great community of researchers here. We even have an annual Texas Bigfoot conference that’s in its 22nd year.” 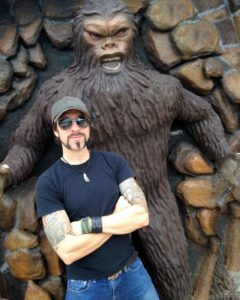 Blackburn knows that those whose assumptions of the Texas landscape are fostered by cowboy movies, and cartoonish depictions are sorely misinformed, as the Lone Star state harbors an idyllic multi-geographical countryside of which dry, dusty terrain is but a part. Even so, one irrefutable truth is that Texas gets damn hot, especially when compared to Northwestern states like Oregon or Idaho, and biological studies show that the respective flora and fauna often evolve to accommodate the climates. A notable characteristic of Sasquatches is their exorbitant degree of body hair. According to Blackburn, while it’s not outside the realm of possibility to think that the Texas Bigfoot may display adaptations to temper the southern heat, any variances between it and its northern brethren are more related to size and gait patterns.

“In general, I don’t see much of a distinction between the descriptions of the creatures here and those anywhere else in North America. There’s something called Bergmann’s rule which states that in colder environments, animals tend to be hairier, bigger and put on more weight and fat as insulation against those cold environments,” says Blackburn. “As you work down south, they adapt and shed that sort of stuff; bears down here are much smaller than those you would find in Alaska, for example. In trying to discern finer details, there are reports that the Bigfoot sightings here can be somewhat different. The creatures might be a little bit smaller. I’ve even heard several witnesses claim that they’ve seen them running on all fours and that they suddenly rise on two legs. Things like that are unique and almost give you more of an ape-like or animal-like vibe, but of course, Bigfoot sightings are often so brief and fleeting that you don’t have time to concentrate on them. I think that, logically, if these creatures exist in such varied environments, they surely have changed somewhat to adapt to those environments; that’s just nature.”

TEXAS BIGFOOT: HISTORY, LEGENDS, AND MODERN ENCOUNTERS IN THE LONE STAR STATE furthers the body of work that cryptid researchers and enthusiasts have filled their bookshelves with for years because, as is the case with Blackburn’s other books like Sinister Swamps: Monsters and Mysteries from the Mire and Beyond Boggy Creek: In Search of the Southern Sasquatch, his expert take on the subject matter is complemented with details straight from the mouths of those who’ve had their own experiences.

Recounting specific takes, Lyle says, “There are a few sightings that are sort of run-of-the-mill: brief sightings and roadside crossings. Then, there are those that stand out because the encounter is either lengthier or it involves situations where the creatures display aggression. One, in particular, is from Northeast Texas, where a woman and her husband were driving out near a lake one evening until they had a flat. This was before cell phones and they didn’t have a spare, so the husband had no choice but to walk back to the little local town and try to get a wrecker or tire. The wife stayed behind, rolled down the windows and was enjoying a peaceful evening until she heard a blood-curdling howl. Afterward, she saw three upright hair-covered creatures walking from the woods towards the truck where she was sitting in the cab, and within a few seconds, these things were upon her. What looked like the male of the trio was reaching in and trying to grab at her. She was trying to escape its grasp and get the window rolled up and ended up hitting this thing with a Coke bottle to where it backed off. Shortly thereafter, they ran back into the woods. When her husband returned, they went to the hospital, which further added credibility to the case. You can only imagine the motivations of this thing had it grabbed her and pulled her out of the truck window. This is straight out of a horror movie, and this woman is as credible as any of the other witnesses that I included in the book. It wouldn’t be the first case where creatures down here have shown aggression, as there’s another case known as the Lake Worth Monster which occurred in 1969, again in Northeast Texas. This was at a time when it wasn’t as populated as it is now, and that case had quite a few sightings.”

Bigfoot stories are often speculative, full of “maybes” and “what-ifs,” but Blackburn’s authority stems from his willingness to seek out as much truth as exists. Circumstantial evidence provided by those who’ve had encounters shores up the credibility factor in his books, and TEXAS BIGFOOT is no different. The evidence is out there for those who choose to believe, and between photos and interviews, their stories are as concrete as possible. 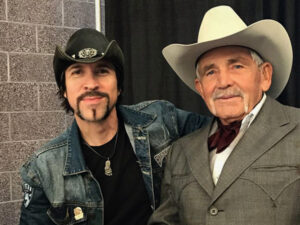 Lyle Blackburn and the legendary Bob Gimlin, who was present at the Bigfoot sighting captured in the Patterson Gimlin film.

“There are things that have been submitted over the years in support that these creatures are real, and one that I highlight in the book is of a footprint cast taken by a man that I – and several of my fellow researchers – have interviewed,” states Blackburn. “He’s extremely credible and fortunately, has the track cast, and we were able to take good photos of it. Those are in the book as well as the circumstances surrounding how those tracks were found. When I’m writing a book like this and talking about Texas, which has a diverse geography, I try hard to include maps and give people a sense of where we are in the state as well as photos of various landmarks or wooded areas and places where I’ve been because I can describe those areas and bring the reader with me as we explore this subject geographically.”

One part travelogue, one part chronicle of the Texas Bigfoot, Blackburn’s latest book casts some much-deserved attention on his state’s most reclusive resident and the surrounding community, cultivated through a boots-on-the-ground angle that few others possess. TEXAS BIGFOOT was an undertaking years in the making for a writer whose CV also includes researcher, musician, hot sauce proprietor and podcast host. Yet, even for Lyle Blackburn, the man that chases the monsters, the tale of the Texas Bigfoot will have to be experienced from a distance for the time being.

“I do know quite a few people that have had sightings in Texas and I’ve had what I believe to be a sighting up in the Boggy Creek area in Arkansas, which is just across the border. Talking in terms of a Texas Bigfoot, unfortunately, as much as I’ve hunted and camped around here, I’ve never had a sighting. I think a lot of that boils down to luck and where you are. Certainly, people in my circle have had sightings here in the state, which helps me as an investigative journalist to be able to put some credibility into these stories. When I can interview somebody, especially when it’s someone I’ve known for years, and I hear the stories and see the track castings, that’s what motivated me to write this book. There’s never really been a Texas Bigfoot book, and I kept telling myself that, at some point, I’ve got to write it to put it all out there, the history and the sightings here in the Lone Star State.”

TEXAS BIGFOOT: HISTORY, LEGENDS, AND MODERN ENCOUNTERS IN THE LONE STAR STATE is now available for purchase. To stay up-to-date with all of Lyle Blackburn’s endeavors, including his new monthly podcast MONSTRO BIZARRO, visit his website.