We’ve all had days we wished could last forever; that perfect stretch of time where the stars align and we’re content with our lives. But sometimes those wishes turn to nightmares. That’s the premise of Craig Singer’s newest film, 6:45. Part slasher, part time loop story, the concept itself is simple: a musician finds himself doomed to live the same day over and over again. The premise is hardly new and though the time loop subgenre is fairly limiting, Singer’s variation unfolds in new and intriguing directions, becoming more a study of a crumbling relationship than a murder mystery. A shocking twist late in the final act delivers a devastating blow and makes a compelling statement on the power of love, violence, and forgiveness.

Hoping to get their relationship back on track, Bobby (Michael Reed) and Jules (Augie Duke) take a midwinter vacation to Bog Grove, an island resort town Bobby visited as a child. The idyllic beachside getaway is gorgeous and peaceful, though oddly deserted. Their romantic trip is slightly marred by Gene (Armen Garo), the quirky hotel manager who can’t seem to stop listening at their door and the bedside alarm clock mysteriously set for 6:45 AM. Ferries to the mainland are cancelled due to the anniversary of a tragic murder in the island communities recent past. So the couple set out to enjoy their stay and reconnect after a series of devastating fights that almost ended the relationship. The day unfolds beautifully and Bobby and Jules find themselves growing closer together until a shocking tragedy changes everything. But Bobby gets a second chance to set things right, waking up again at 6:45 only to find himself destined to relive the same dream-turned-nightmare again and again. 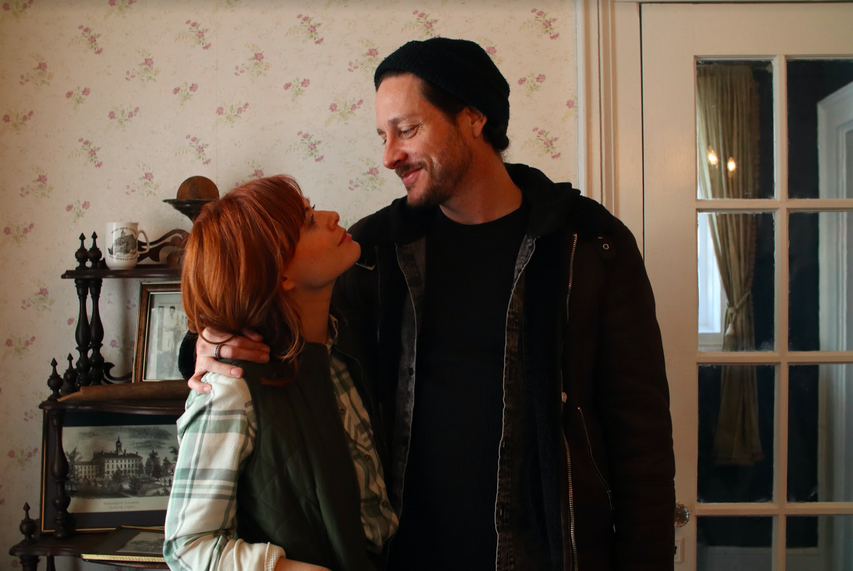 Time loop narratives are often allegories for unresolved issues in the main character’s lives and Bobby has a lot to unpack. An unread letter Jules wrote but never sent to him when they were fighting foreshadows lingering tensions between the two lovers. Bobby is carrying a big secret he still hasn’t confessed and his mysterious past looms over the relationship. It’s perhaps even the reason he’s stuck in the loop, providing an interesting insight into his flawed character. In addition to saving Jules’s life, Bobby must decide if he actually wants to leave the loop. Would he rather watch the woman he loves die over and over again or risk coming clean about his past sins and losing her?

Throughout Bog Grove, Jules and Bobby are stalked by an unnerving killer in a black hoodie and near-faceless mask. He attacks seemingly at random, shattering the bliss-filled day with his vicious crimes. The character design is both understated and terrifying, providing no clues as to  who the killer is and why he wants to harm them. Nothing Bobby does seems to stop him. No matter how he tries to subvert the inevitable violence, the killer always manages to track them down before the clock strikes midnight. While the vague nature of the killer is effective, less so are the montages of shaky shots and quick cuts intended to show a multitude of passing days and jumbled memories. Rather than disorienting, these cuts are just jarring; a confusing mess instead of the intended descent into madness.

Bog Grove itself is quaint and charming, the perfect setting for a romantic getaway, and though the sun washed streets and empty beaches of the Jersey shore are inviting, they carry a slightly ominous atmosphere. Knowing how the day ends, we anticipate the hooded killer potentially lurking around every corner. Garo is also effectively creepy as Gene, the too familiar hotel manager. His lurking presence casts a nefarious shadow over the weekend and acts as a sort of harbinger for the events to come. His brief but captivating performance rides the line between warmth and menacing edge leaving us unsure if we should trust him. The hotel’s only other employee is Shelly (Sabina Friedman-Seitz), a mysterious pregnant woman who keeps appearing in different roles on the island and may hold the keys to Bobby’s salvation. The story’s strongest element is the chemistry between its two leads. Both Duke and Reed deliver phenomenal performances, capturing the nuances of a couple that do truly love each other, but struggle to hold onto their relationship. As Jules grows increasingly frustrated with Bobby’s understandable fear and desperation, hidden elements of the relationship begin to emerge. Cracks in their commitment to each other begin to spread as Bobby desperately tries to hold the two together. When the final pieces of the puzzle click into place, the results are tragic and grotesque, leaving us wanting more for the doomed couple and wishing we had seen it coming.

Time loop narratives are nothing new and recent entries like Happy Death Day and its sequel have begun to venture into the horror genre. But Singer’s twist keeps the story from veering into the well-worn territory of classic films. Well-placed breadcrumbs lead to an emotional and heartbreaking conclusion that flips the story on its head and changes everything we thought we knew about the couple. It’s these details that separate 6:45 from the pack and keep it from being just another run-of-the-mill affair. With a clever conceit and an engaging central couple, 6:45 ensures it will stick around for a long time.