“Everything happens for a reason” is an expression said to you almost exclusively at times when you do not want to hear it. Delivered by a soap-box toting, essential oil wearing individual, this useless expression serves to retroactively retcon the randomness of your own misfortune. But what that expression does make me ponder is the seemingly random moments in horror films that have defined the entire series. What if Laurie didn’t go investigate the house where Annie was babysitting? What if Alice had taken a longer nap? What if Nancy didn’t dream? Or Clarice read about Hannibal on Wikipedia instead? Halloween Kills attempts to tell us that everything does not happen for a reason, that Laurie simply had Main Character Syndrome all along, that Michael is a geographical completionist, and that Laurie was just one stop on the way home. I wonder what would happen if someone approached Sidney Prescott and assured her, “You’re better for this, you know. Watching everyone you love die… it made you special… made you who you are…” tapping the poor girl’s chest to punctuate their point.

The randomness of murder was something I couldn’t help but think about as I rewatched 1997’s FUNNY GAMES. Written and directed by the absolute king Michael Haneke (The Piano Teacher, Cache), this home invasion warhorse stars Susanne Lothar, Ulrich Muhe, and Arno Frisch. It looks like a horror movie and sounds like a play, but really this masterpiece is part open letter, part satire, part indictment of our ongoing obsession with violence and terror.

Haneke doesn’t toil in subtlety. From the film’s opening which features a game of guessing classical compositions clashing with the loud metal music of the credits, FUNNY GAMES is here to tell you it plans on making you uncomfortable. It is also going to be very, very scary. I should acknowledge my bias in all of this: home invasion is my go-to for absolute terror. Nothing scares me more. I’m still not over The Strangers. So when I say that Haneke’s film is one of the scariest I’ve ever seen, it is in part because this sub-genre gets me so bad the only I way I can cope afterward is to turn to 1950s big budget movie musicals and a tepid cup of Yorkshire Gold tea to calm my nerves. 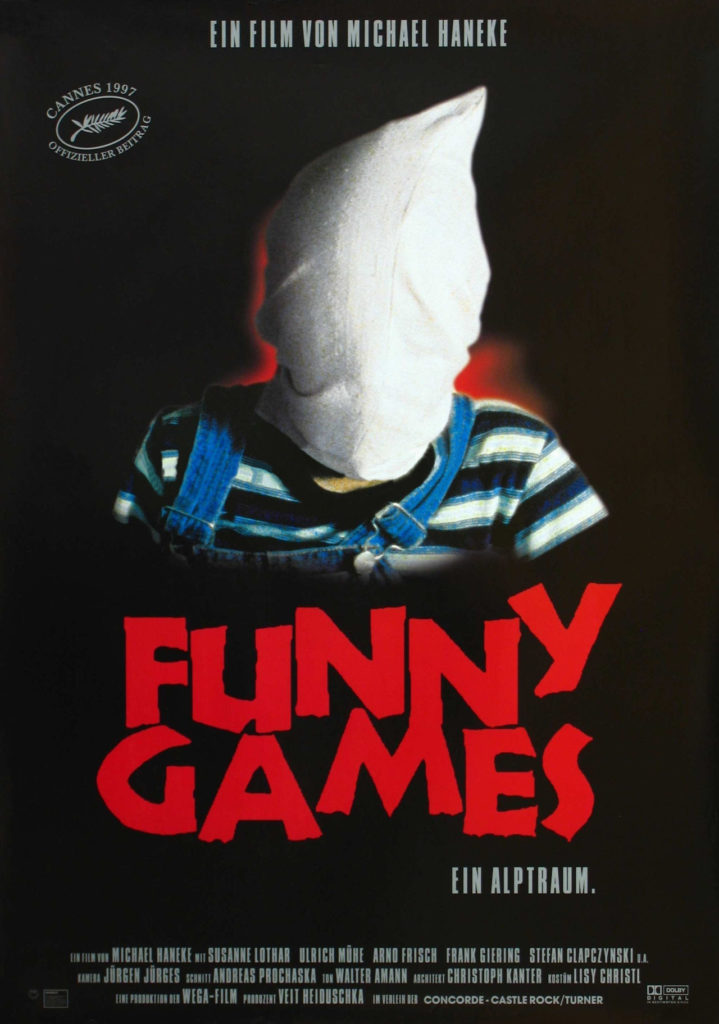 Anna (Lothar) and Georg (Muhe) are an affluent couple traveling to their Austrian summer home with their adorable son Georgie (Stegan Clapczynski). Located on an isolated lake, our little fam has some nice neighbors, and everyone seems to know each other. Nothing scarier than domestic bliss, amirite? As a child who grew up on chain restaurants and Sex and the City 2, my spidey sense is already tingling. When our protagonists stop and say hello to their neighbors, they notice something off. First: two strange men in white accompany their friends. Second: their friends can’t even make small talk. Anna has no idea she drove into the climax of someone else’s story.

Once at their own house, Anna fusses in the kitchen. She uses a cellular. She smokes cigarettes while washing lettuce. I miss 1997. Meanwhile, her husband and their son enlist the help of the neighbor dude who brings along one of the strange men, Paul (Frisch). Paul wears white gloves and looks like Josh Hartnett. His all-white ensemble creates a Hawthorne level of symbolism but because it is delivered in this cheeky post-modern way I don’t hate it.

Back in the kitchen, Paul’s sidekick Peter (Frank Giering) visits Anna. He is clumsy, less hot than Paul, and presents as a frump. Already he is the beta to Paul, the Loeb to his Leopold, the Phillip to his Brandon. He needs eggs, claiming to be sent here on behalf of the neighbor next door. Could Anna spare any? Sure. She fetches some eggs. This is what people do in the country. They share. That’s not so scary, is it? Kind of. Peter drops the eggs. This is the first game: a temperature check in a stress test. Anna passes. People drop eggs, it’s not the end of the world, etc. She cleans up the mess and then Peter asks for four more. Another test. She controls her annoyance. This time she wraps the eggs in newspaper. But while she’s doing this, Peter, clumsy fool that he is, knocks her cell into the sink. Again Anna attempts to control her frustrations. Peter waits for her to snap, but the closest we get to an outburst is Anna’s exasperated laugh as she says, “Perhaps you should take your eggs.”

Paul enters the house to admire Anna and Georg’s golf clubs. It’s unsettling the way these men insert themselves into her house. Paul asks to borrow the driver to take a couple swings out back, and Peter follows him with his wrapped eggs. When the two men return, Anna is shocked to learn Peter has once again dropped the eggs. He asks for four more. This is when Anna snaps. The two intruders turn it back on her: “Sorry ma’am, but I don’t understand why you’re suddenly so unfriendly.” Anna lost the game. Paul uses the club to break Georg’s leg. “Careful,” he says, “I’ll break your eggs too.” What a devilish line. The rest of the film functions as a traditional third act home invasion, but this is the moment where I wondered: was all of this happening because Anna failed the stress test?

Now we’ve returned to reasoning, meaning, connection. Does the madness of “everything happens for a reason” apply to Anna’s situation? FUNNY GAMES would suggest that Anna is not special because the attack on her family happens in between two others. The lake itself seems to be the only connection, but we never understand why Paul and Peter choose this lake. I wondered what would have happened if Anna didn’t snap. If instead she fetched them more eggs. If, when Peter spilled the eggs again, as he inevitably would, Anna said, “That’s okay. I want to go to the store and get some things anyway. Can I pick up eggs for you?” If, when Paul admired the golf clubs, Anna said, “Take them. We’ve been meaning to get a new set and you both seem like such great young men. You’re both wearing white so I know I can trust you.” Paul and Peter are obsessed with manners. What if she just gave them four more eggs? Do eggs happen for a reason?

“Why are you doing this?” Anna and Georg ask. “Why not?” our intruders reply. Eleven years later The Strangers will answer: “Because you were home.” Both lines point to the randomness of our experience. And with Paul and Peter, we almost get a Billy and Stu take on millennium motives. Paul winks at the camera. This touch of humor increases the terror when it could very easily take away from it. As Anna and Georg beg for a motive, Paul introduces The Bet. It’s simple, they bet that Anna and her family will be dead by 9 am. Paul asks the audience, “What do you think? You think they stand a chance?” It couldn’t feel more texturally different than Scream, and yet their similarities are numerous. Paul walks like Michael Meyers but talks like Billy Loomis. He is seductive, logical, and psychotic. He is the perfect horror villain, and the fact that he is so darn handsome only complicates my feelings. With lines like, “You practically force me to treat you badly” and “This is just as unpleasant for me,” FUNNY GAMES embodies what a horror movie would look like if Oscar Wilde had ever written one.

Young Georgie attempts to escape in one of the film’s scarier sequences. Paul catches him and brings him back to the house. When Peter shoots him with a shotgun I was shocked. You anticipate a fake out sequence, but instead Anna and Georg sit unmoving in the living room while the TV plays at high volume. This scene lasts for an interminable length of time, and like Halloween and Scream, the TV set becomes a supporting character. Paul and Peter leave. Does this mean the madness is over? While Georg tries to dry the cell phone’s battery with a hair dryer, Anna makes her escape to get help. Here Haneke has some fun again. On the main road, Anna sees a car approach. She doesn’t trust who might be inside, so she hides. When it turns out to be someone else, she lets her guard down and decides to trust the next car to pass, which as you can imagine, is the car with our killers inside.

They gag and drag Anna back to the house. Paul says, “The mute sufferer is such unspectacular fashion,” right before removing her gag. I wondered what it would be like seeing this in theaters. Did it get a laugh when he goes on to say, “We want to offer the audience something” – or did the terror drown out the comedy? It doesn’t go quite as far as Angst, but it’s up there. And what makes it scarier than The Strangers is that our intruders are not masked; they don’t present as monsters, they feign reason and decorum. Paul and Peter introduce the final game of the evening called The Loving Wife. If Anna can say a prayer backwards then she wins. Anna uses this moment to grab the shotgun. She shoots Peter. But if we were expecting this to then showcase a badass final girl who seizes control of her horror, we would be mistaken. Paul picks up the remote control and rewinds our reality. Anna goes for the gun, again, but Paul is too quick for her. Because unlike all the killers in all the slashers, Paul doesn’t make a single mistake.

As morning approaches, Paul and Peter take Anna sailing. Paul kisses her on the cheek, says, “Ciao Bella,” then knocks her overboard where, all tied up, she most certainly drowns. It is stark, unexpected, and undramatic. And that’s part of what makes it feel so real. Our two gentlemen in white sail to the next house where they knock on the back door and ask to borrow some eggs.

Final Thoughts: Haneke didn’t set out to create the perfect horror film, nor did he. While the entire film is scary, you know Anna will die. It never feels like the sort of movie where people will live, where a Sidney or a Gale can take multiple stabs to the chest, only to sit in the back of an ambulance fifteen minutes later dishing out advice and planning new book projects. Our killers are too powerful. They will win. And while that adds to the frights, it also takes away from the tension. For me this film is at its best before the carnage begins, when Paul and Peter are just nosy guys from next door, asking for eggs and commenting on golf clubs. The anticipation and fear they evoke is much more frightening, and perhaps I’ll never look at eggs the same way again (and how did I really look at eggs before?). I’d love to sit down a group of those “everything happens for a reason” people and force them to sit through this film: a meta-home invasion reminder of the debilitating randomness of horror.