Hong Kong artist Joseph Tang, better known by the brand name PLANET-X ASIA, has a knack for producing eye-catching creatures which rival those of the great Kaiju (strange beast) movie era in the 1950’s and 1960’s. Joseph has been designing monsters since his youth, but only recently decided to turn them into toy terrors.

“I have been drawing and designing monsters ever since I remember”

Tang’s creations are a team effort, as the artist prefers to collaborate with talented people all over the world.

“I am an architect and I believe that teamwork is a collaborative process,” he says. “I admired the artisan toy makers who do everything by themselves, but that’s just not my thing. The internet has allowed me to collaborate with talents all over the world, and I have started working with sculptors who model with clay.” 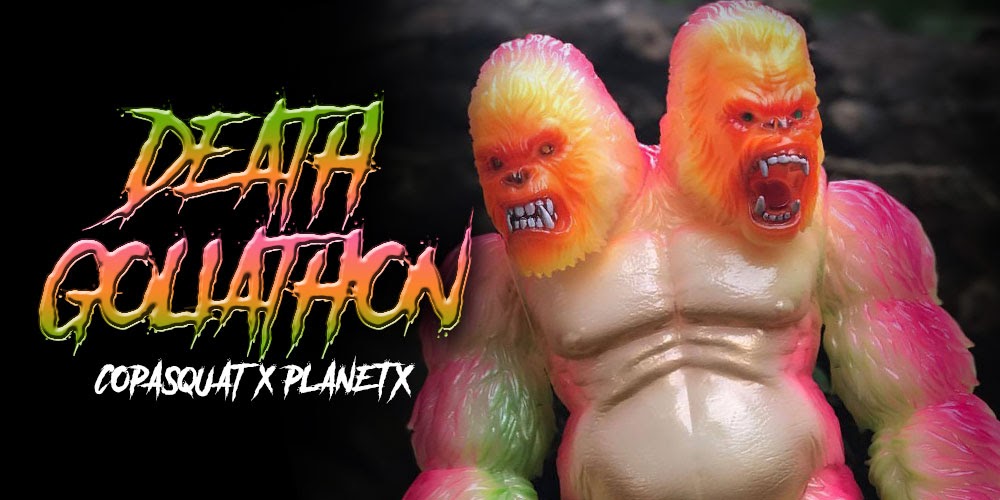 Tang’s sofubi (soft vinyl) beasts are created with a great deal of detail and love of the genre which they pay homage to. Most of these figures stand a whopping 9-10 inches tall, even displaying many points of articulation.

Planet-X Asia has a great deal of admiration for the Kaiju/Monster genre and he shows this by how he melds Greek mythology, kaiju and giant robot creatures into his soft vinyl army of designer toys. So if you’ve always wanted a two headed gorilla beast or a double headed Cyclops wielding spiked skulls on chains, you’re in luck.

“When I was a little kid, my dad bought me Ray Harryhausen’s “7th Voyage of Sinbad” and “One Million B.C.” on Super 8, and that shaped my life,” says Tang. “The kaiju and sci-fi genre has always been an inspiration for my work, even before I started making toys. Through the common love for kaiju, I get to know many great friends and wonderful collaborators across the globe.”

If the design of these creatures is amazing, the paint and spray jobs on them are even one step beyond that. The creatures materialize fully with a brilliant bright neon Technicolor of ferociousness. From top to bottom these toys are painted with stunning style –  the features really pop and you can tell there’s love behind bringing them to life. The paint on weathered wrinkled hands or giant size sculpted teeth let you know these beasts weren’t just born yesterday.

“I wanted to achieve in my toys a unique aesthetics by combining the proportion and color scheme from vintage sofubi and contemporary detailing pioneered by McFarlane Toys,” says Tang. “The standard size for Japanese vintage sofubi is 8-inch tall, which is a pretty big piece of toy for a kid. My toys are made for adult collectors so I chose to make them slightly bigger, about 9 – 10-inch tall, such that I can retain that ‘big toy’ appeal to an adult audience. I grew up playing a lot of Hong Kong-made cheap or bootleg toys, I think that’s also part of the recipe.”

The sculpture and texture on Planet-X Asia DEATH GOLIATHON limited edition figure (two-headed giant gorilla beast) is astounding. There are only 10 of this variant available worldwide. Every strand of sculpted hair covers the body in beastly texture. The nails on both hands and feet look like they could claw and dig their way through any foe as they stand out like real nails should. If you flip the figure over and run your hand across the bottom side of his feet they have that gritty sandpaper feel (like wrinkled leather). Don’t stare into the super realistic bloodshot red eyes of this creature too long as it will only make him more ferocious. , I couldn’t forget to mention the spiky thorn like protrusions that are located down the spine of the back, the forearms and the knees, this is monster design at its best, which I hope droves of new fans young and old will get a chance to see and enjoy for themselves.