Panic Fest ‘22 Movie Review: The British Horror-Comedy Will Keep You Laughing Even “WHEN THE SCREAMING STARTS”

As a descendent of both found-footage and horror/comedy, the horror-mockumentary subgenre has grown in popularity ever since the massive success of Taika Waititi’s What We Do In The Shadows, which is to vampires as 2007’s Behind the Mask: The Rise of Leslie Vernon is to slasher-wannabes. With a new take on the aspiring serial killer, Conor Boru’s 2021 film WHEN THE SCREAMING STARTS held its virtual US premiere at Panic Fest ‘22.

In WHEN THE SCREAMING STARTS, the dissatisfied Aidan Mendle (Ed Hartland) decides to kick-start his serial killing career by creating a Manson-style “family” of other killers at the urging of his murder-voyeur girlfriend Claire (Kaitlin Reynell). Amateur documentarian Norman Graysmith (Jared Rogers) joins forces with Aidan, hoping that he has found the subject for the documentary that will make his career. After the vicious Amy (Octavia Gilmore) joins the family, things start to get serious, and Aidan and Norman’s plans begin to spin out of control. 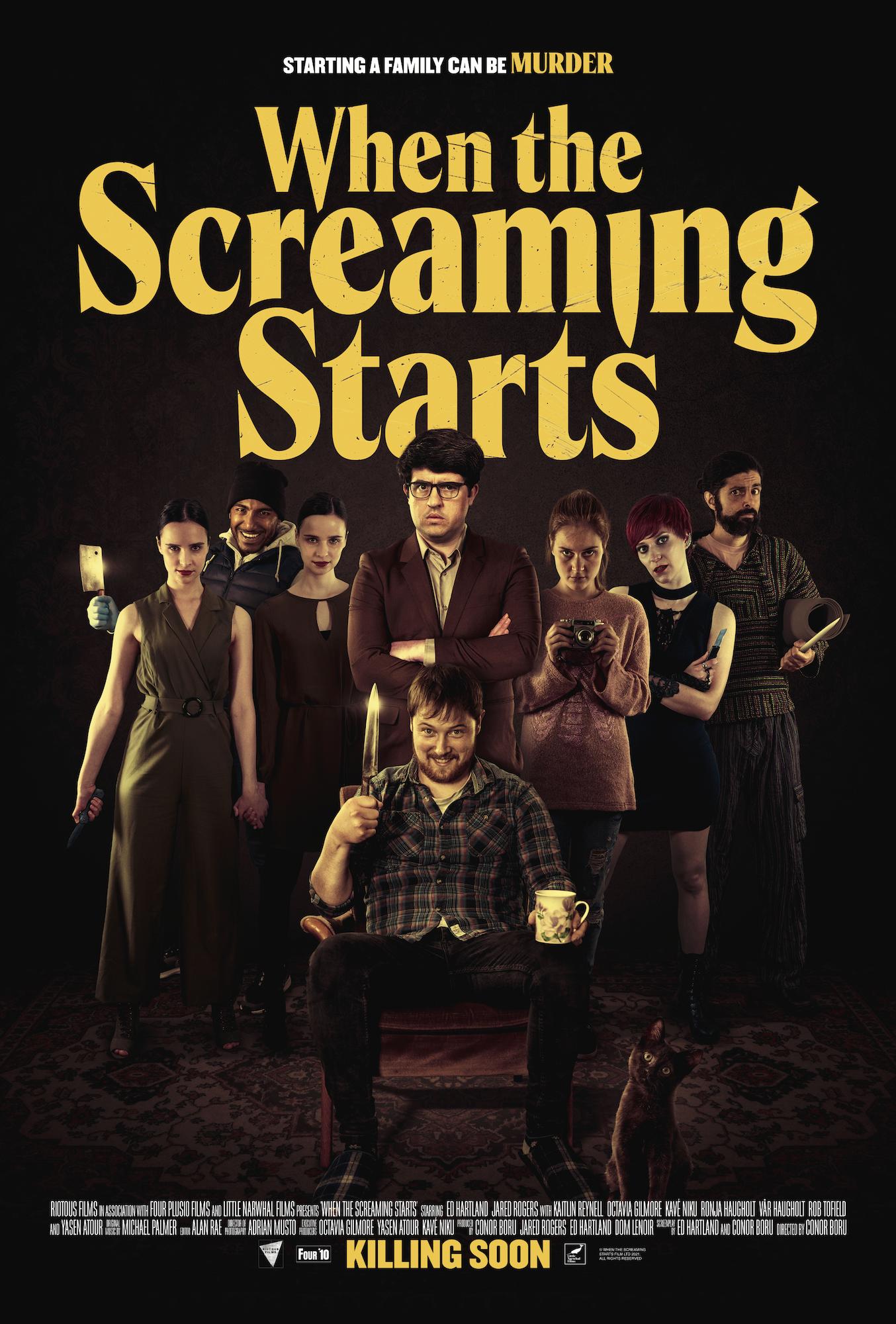 Like any successful horror/comedy, WHEN THE SCREAMING STARTS is both wholly terrifying and hilarious. Making comedy out of serial killing is a complicated task, and Boru and Hartland’s film skillfully walks the line between obscene and amusing. With a killer ensemble of characters and enough true horror to even interest genre die-hards, WHEN THE SCREAMING STARTS is sure to elicit a mixed response simply due to its subject matter.

The conflicts that arise among Aidan’s family mirror the squabbles between any group of friends or roommates, yet they culminate in much more dire consequences for the parties involved. For example, at one point Aidan is raked over the coals by his family members for his reluctance to participate in the crimes he directs them to commit. Aidan, as it turns out, is not a particularly talented cult leader – a source of much comedy in the script.

An interloper in both Aidan’s “family” and his relationship, the sociopathic Amy is a particular highlight of the film; Octavia Gilmore’s performance is a stand-out amongst the supporting cast. Kudos are also due to Ed Hartland and Jared Rogers, the latter of whom serves as the audience surrogate in the film, until he…doesn’t. Endings may be hard to execute in horror, but the twist of WHEN THE SCREAMING STARTS is both an unexpected and compelling one.

WHEN THE SCREAMING STARTS is a promising debut from director Conor Boru and is sure to be one of the best horror/comedies of the year.

WHEN THE SCREAMING STARTS will see distribution by Double Dutch International in 2022.