Directed by Adam Rifkin and written by Penn Jillette (and yes, Teller makes an appearance as well—can you believe the guy is 70!?), DIRECTOR’S CUT follows a troubled production made all the more difficult by Herbert Blount (Penn); an obsessive crowd-funder who has an unhealthy preoccupation with actress Missi Pyle (playing herself) as well as a desire to re-cut the entire film in his image.

From the opening credits (that Blount writes over), DIRECTOR’S CUT performs like a semi-actual fright flick with the commentary track turned on. Initially, I thought this might be distracting, but as the story progressed, I actually enjoyed Blount’s sardonic verbiage over the proceedings. 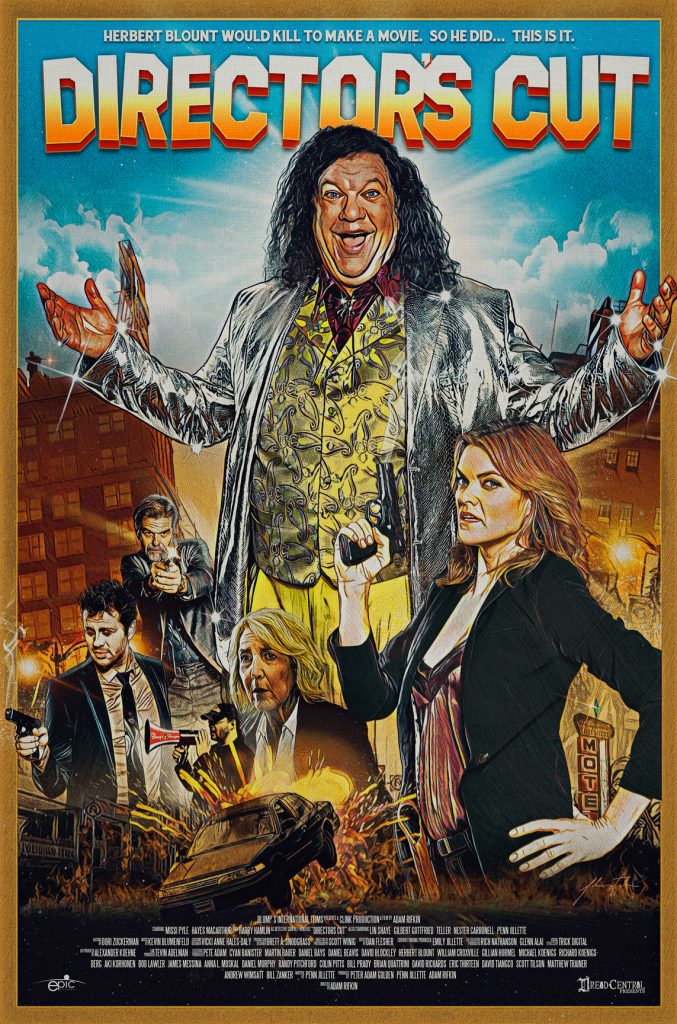 As this is a film written by comedic legend Penn Jillette, there’s a certain level of expectation one has when viewing this meta-found-footage experience. I for one furrowed my brow at seeing the poster art and Penn’s 6’6″ frame stretched over it. I didn’t know the man was fond of horror (and even after watching this, am still not sure) but, what the hell, sign me up. It can’t be as torturous as Penn and Teller’s “Desert Bus”. . .

Given Penn’s resume of mockery and parody, it should come as no surprise that DIRECTOR’S CUT leans far more into comedy than it does horror. Yes, there is some gruesome imagery and graphic bloodshed, but it’s depicted as footage/scenes from the fictional production that Herbert Blount is inadvertently messing with. Throughout the course of Blount’s “cut”, the tone is kept jovial and his disturbing shenanigans are presented in an almost endearing way. He comes off like a bumbling idiot from any number of comedies that’s been irresponsibly dropped into a horror narrative. This works in the movie’s favour as Blount never comes off as unlikeable per se, but utterly disillusioned in his over-the-top (and psychotic) antics. 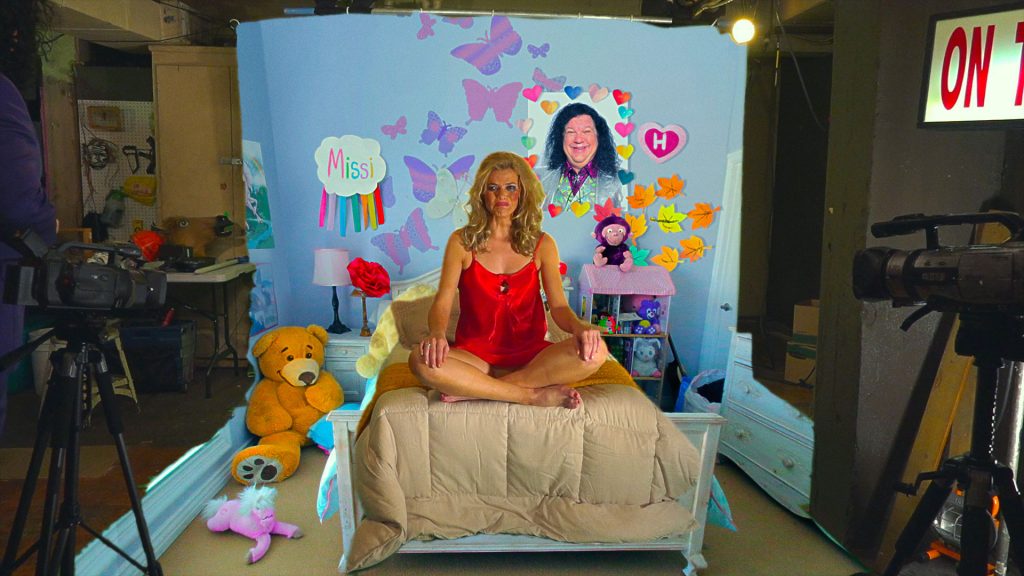 As the production progresses, Blount’s obsessive tendencies increase alongside his rampant commentary. He waxes poetic on filmmaking terminology, do’s and dont’s and makes repeated jokes about crowd-funding (which, funny enough, was apparently how this movie was made). For those in the filmmaking medium, much of this rhetoric is old news and doesn’t come off as intelligent as I’m guessing it was intended. Beyond some jabs at the filmmaking process, Blount’s verbal observations lack the satirical sting that Penn is known for. They more come off as guidelines for inexperienced directors to abide by (and in many ways, should) if they are considering making their own feature.

One moment in particular feels like an overlong homage to FAMILY GUY and has Blount advise the viewer to “pay close attention to this scene”. He then begins to loudly chew chips so that nothing can be heard. Har-har, get it? It’s prolonged and not that amusing. Again, while I appreciated the overall convivial tone, portions like this came off as a little too juvenile.

Oddly enough, once DIRECTOR’S CUT maneuvers into some actual horror territory, the movie becomes all the more facetious. Like an unaired episode of Tim and Eric’s Awesome Show, Great Job!, DIRECTOR’S CUT becomes a purposefully terrible movie within a movie within a movie (lost yet?). Blount might be able to talk the cinematic talk but he cannot walk it whatsoever. Awful CGI, cringe-inducing practical effects and hilariously bad editing replace any semblance of a horror film and what we’re left with is a stalker’s shitty attempt at filmmaking (albeit one that’s rollicking to watch).

In terms of meta-horror, DIRECTOR’S CUT isn’t a game-changer like Behind the Mask: The Rise of Leslie Vernon. It’s not timely like Scream, nor is it as clever as the works of Benson and Moorhead.  However, it’s an entertaining bit of sarcasm that’s made all the more stronger by a quick pace and Penn’s naturally charismatic persona. For those that appreciate the works of the ol’ illusionist, DIRECTOR’S CUT is now on VOD and will be soon hitting store shelves with a bonus-feature bloated Blu-Ray/DVD Combo pack.that you can check out early in our exclusive article.