Movie Review: Laugh yourself sick at “ONE CUT OF THE DEAD”

It’s not quite right to say that ONE CUT OF THE DEAD reinvents the zombie genre; in one sense, the undead are incidental to the movie’s true pleasures. On the other hand, the fact that the conventions of low-budget ghoul cinema are now so familiar works in ONE CUT’s favor, providing an identifiable base from which to spin off an endlessly clever, gaspingly funny, beautifully constructed and executed mix of genre spoof and behind-the-scenes satire. It is not only one of the most entertaining zombie films ever made, it’s among the most humorously observant movies about movies in cinema history.

Opening today at New York City’s IFC Center and Los Angeles’ Alamo Drafthouse Downtown, with special one-night screenings across the U.S. and Canada on Tuesday (see details here), ONE CUT OF THE DEAD benefits enormously from knowing as little about it as possible before sitting down to watch it. So you won’t read much about the content of its story and characters here—at least beyond those seen in its first 37 minutes. These are, as the title indicates, one long, unbroken take that starts with a woman being attacked by a cheaply made-up ghoul. She doesn’t look terribly frightened under the circumstances, and the scene is interrupted by Higurashi (Takayuki Hamatsu)—a director furious that Chinatsu (Yuzuki Akiyama) can’t get her performance right. Aha—we’re in meta territory, watching a low-budget flick about the making of a low-budget flick. 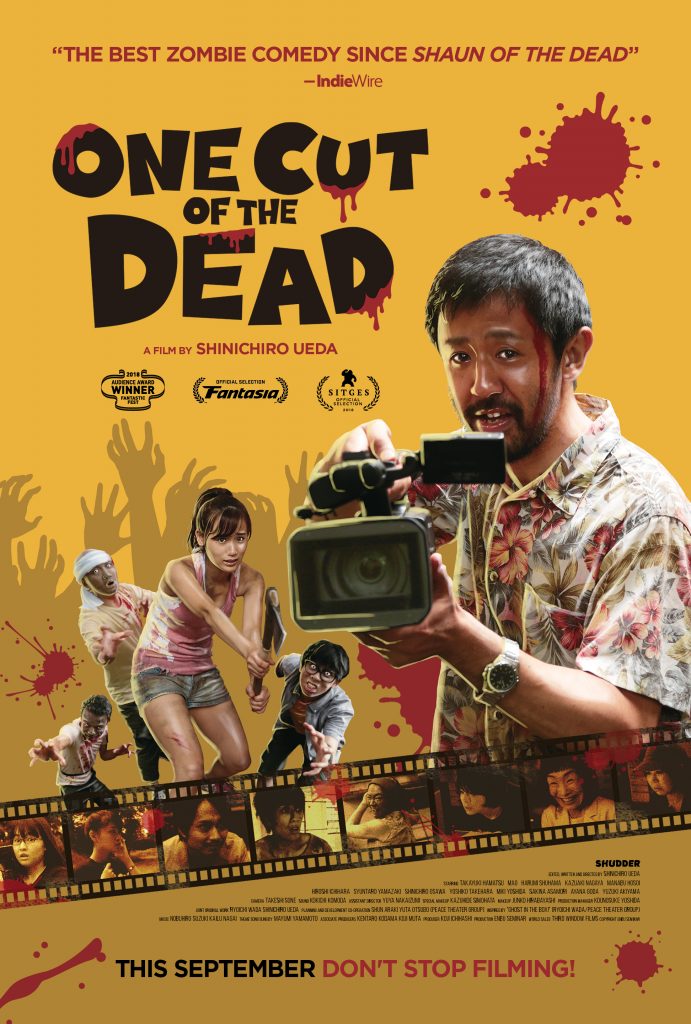 We soon learn that the small cast and crew’s location is an abandoned water filtration plant where strange things allegedly happened in the past…and then some genuine walking dead turn up to terrorize them. Another meta level is added, and a lot of the subsequent humor derives from Higurashi insisting that his team keep their cameras rolling to capture all the ensuing bloodshed, which is often exaggerated to the point of slapstick. One can also be impressed at writer/director Shinichiro Ueda’s staging of the frenetic action without any apparent cuts, even if there are occasional moments when the camera or actors appear to be in the wrong place.

As it turns out, there are reasons for these awkward moments and odd pauses in the dialogue here and there, but you won’t read about them in this review. ONE CUT OF THE DEAD is structured in three acts, the second of which sets up what we’ve seen in the first, with the third paying off on both. Each section has plenty of amusing moments, but it’s the last one that truly launches the movie into the horror/comedy stratosphere, as it doubles back on itself with breathtaking ingenuity. Scenes we’ve seen before are presented in a fresh and often hilarious light, while gags we’ve previously laughed at turn out to be setups for even better jokes. While providing hardcore zombie fans everything they want in terms of bloodletting and flesh-munching, Ueda also kids the form in ways that express real affection for indie horror and the people who make it. Along the way, he not only works entertaining and even touching character arcs in amidst the insanity, but reveals new sides to them in the home stretch, making them even funnier and/or more resonant.

ONE CUT OF THE DEAD is as much fun as any movie in memory while it’s playing out, and as a bonus, it elicits a different kind of admiration when it’s over. Thinking back, you realize what an insane logistical challenge it must have been for Ueda and co. to pull this off, and are amazed at how natural and easy they make it look. Similarly, everyone in the cast gives their parts their all (Hamatsu’s multifaceted turn is especially memorable, as is Harumi Shuhama, as a makeup artist who undergoes a transformation of her own), and yet their performances seem even more impressive upon reflection on the circumstances in which they were delivered. ONE CUT OF THE DEAD is such a marvelously good time, and made with such clockwork precision, that after you’ve seen it, it’s hard to decide whether to watch it again or seek out a documentary on how it was made.

(For the record, the trailer is included below as a formality, but please don’t watch it. You don’t want to know any more.)