MOVIE REVIEW: “DRAGGED ACROSS CONCRETE” WILL GIVE YOU ROAD RASH

Brett Ridgeman (Mel Gibson) and his partner Anthony Lurasetti (Vince Vaughn) are having a bad day. After taking down a felon with a penchant for dealing drugs to kids, the two are suspended on specious grounds of being political incorrect. Without pay and their personal lives beginning to collapse, a rather unlawful plan is hatched that will give each the reward they feel they both deserve. Juxtaposed against them is a similarly loyal gangbanging duo (Tory Kittles and Michael Jai White) nurturing a clandestine scheme that will potentially reap a profitable future. And somewhere not-too-distant, a very human monster rampages. . .

All of these paths will converge in unexpected ways in S.Craig Zahler’s third directorial feature, DRAGGED ACROSS CONCRETE. Making its US debut as this year’s closing film to the genre smorgasbord that is Hollywood’s Beyond Fest, Zahler’s latest is an unconventionally ruthless exploration of a broken economy, the entitled crime it manifests and the ever-crumbling edge that oftentimes good men are placed on because of it. As before, Zahler’s trademark genre-shifting style is in full force with a film that’s not only his most ambitious to date (clocking in at a whopping 2.5 hours), but one that is also bluntly relative to these sordid times.

It ain’t preachy by any stretch, but early on, DRAGGED offers a much welcome dose of Un-PC rhetoric (and pejoratives to follow) in order to drive home the current state of race-baiting, a society in a perpetual state of offense, and the media’s exploitative weaponizing of both. It’s a moment that establishes the ever-building tension between parties and deftly addresses the current zeitgeist — especially in reference to both law and violator; how each perceives the other. 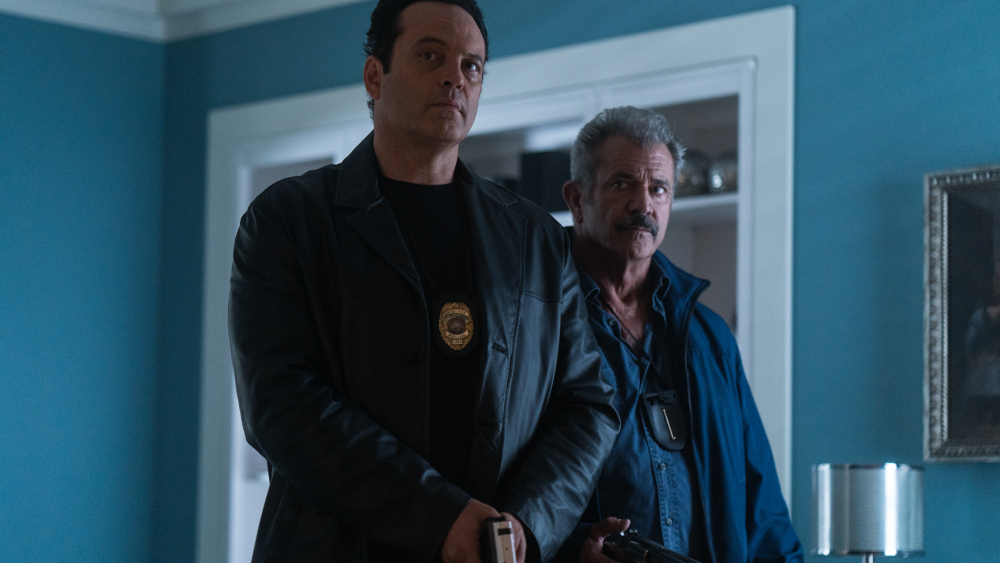 From this groundwork, a multi-layered narrative is stacked – one which shifts focus from protagonist to antagonist at the drop of a hat —  and even goes as far as introducing a new character/arc approximately 100 minutes in. The majority of Zahler’s seedy journey is spent with slow-burn characterization punctuated with brief bouts of concussive violence. Much like the subjects herein, the viewer isn’t supposed to know who to trust, who has allegiances in what places and just how all of the crooked pieces fit. DRAGGED is a meticulous feat of story craftsmanship that isn’t interested in twists, betrayals and red herrings — its sole purpose is to tell a damn good story. And tell it it absolutely does. I can’t remember the last time that I was this on-edge at a movie, but DRAGGED made me feel every solemn moment of dialogue just as hard as every flesh-ripping bullet.

While the movie purposefully eases the audience into its realm (juts as Zahler’s BONE TOMAHAWK and BRAWL IN CELL BLOCK 99 did before it), the payoff of intensity is well worth the wait, and features not only a nail-biting finale of blasts, masks and stabs, but also contains one of the most audacious (and humorous) robbery sequences I’ve ever seen. Those familiar with the filmmaker’s oeuvre should be well aware that the man knows how to shock, and the same practical carnage he’s created in the past is present here, but handled in a far more palpable way. It’s not as over-the-top as, say, the “wishbone scene” (as my friends and I have dubbed it) from BONE TOMAHAWK, but the acts of cruelty are nonetheless effective in their suddenness and cold indifference. Having said that, Zahler knows structure, he knows pacing, and he knows how to not only ease an audience down from something jarring, but also when to back off and let those gazing catch a breath.

When it comes down to it, DRAGGED is all about the people and here, the director has taken broader strokes to establish the personalities, the reasons for what they do and the unfortunate situations it forces them into. It’s a film about perspective and empathy; it’s a film about humanity and the lengths people go to do something noble — even if it means making a few bad things happen first. Zahler understands that in this world, nothing is certain. Angels fall with the devils, and he presents both hero (or is that anti?) and villain with the same causality. Just because one perspective is virtuous doesn’t stop death’s frosty extremity; just because another perspective is chaotic doesn’t beckon justice.

As if Zahler’s movies come pre-cast with the perfect ensemble, DRAGGED is rife with outstanding performances from top to bottom, left to right. Mel Gibson is flawless as the mustachioed cop turned dirty and conveys his motivations with such pathos that you can’t help but get behind him in his dire escapade. Gibson has perfected the art of sympathetic manliness and is a master of both badass and romantic— as well as the transition between both. Here, he’s both a doting father/husband and a cunning dispenser of equity.

Standing over him (literally) is Vince Vaughan as the ever-loyal partner dealing with his own relationship woes. While not near as revelatory as his performance in BRAWL, Vaughan nonetheless is the moral beat to DRAGGED’s heart. He’s the line always pulling back on the severity of the situation — hoping for the best when at odds with the worst. Contrasted with the procedural is that of former criminal Henry Johns, portrayed by a fantastic Tory Kittles. Here’s a man that seeks a better life for his kin, but isn’t above committing a felony to see it through. Beyond a cameo from the legendary Don Johnson, an always appreciatively strange Udo Kier and an increasingly beloved player in Zahler’s works, Fred Melamed, DRAGGED also features a heartrending Jennifer Carpenter as well as a standout performance from Michael Jai White (SPAWN himself!) in a surprisingly dramatic departure from his martial-arts norm.

And then there are the black-clad killers. . . They’re mysterious, indiscriminate and speak with judgmentally precise diction. They’re an intimidating, stake-raising force of barbarity that adds a severe horror undertone to every scene they happen to stand in.

By the end of DRAGGED ACROSS CONCRETE, I was so enthralled and anxious as to the depths Zahler would take me, that I didn’t even realize how tightly I was holding my girlfriend’s hand until she told me it was numb. Like Panos Cosmatos’ Mandy, DRAGGED ACROSS CONCRETE is an experience. It’s a cinematic encounter that has to be digested once the cut to black leaves the audience in surprised silence. For those that appreciative their flicks raw and uncompromising, DRAGGED ACROSS CONCRETE isn’t just unforgettable, but the kind of movie you depart from with some road rash yourself.

Bryan Yentz
Is a cinematic fanatic, writer and artist with a soft-spot for all things horror.