Interview: Felipe Cagno’s “THE FEW AND CURSED” Expands Into Audio

Orchestrating a horror-inspired graphic novel may seem curious work for Brazil’s Felipe Cagno, who by admission, isn’t a huge horror fan. But in all fairness, THE FEW AND CURSED, which Cagno co-created with artist Fabiano Neves, interfuses so many elements across multiple genres that trying to pin it down as one singular perspective would be misguided.

THE FEW AND CURSED tells of “The Redhead,” a gunslingin’ curse chaser whose services can be traded for what has become the most precious of resources: water. A mysterious worldwide drought has caused the planet’s wells to run dry, and there’s been a race to secure the final drops ever since the mini-series began back in 2015 with “The Crows of Mana’Olana.” Since then, the stories have proven too powerful to stay confined to the page alone; There now exists a board game, short film, cards and a soon-to-be-released double vinyl album featuring an audiobook version of the debut story as well as music inspired by the comics. Cagno discusses how a partnership with Encyclopocalypse Publications is creating a new experience for fans of his beloved series. 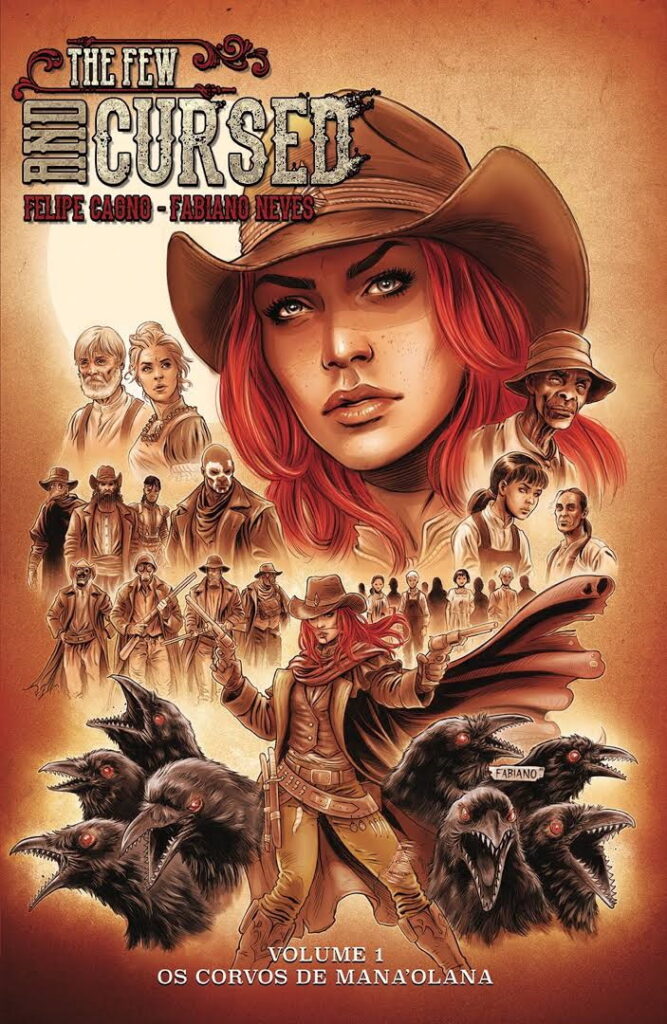 THE FEW AND CURSED projects have been steamrolling through one crowdfunding campaign after another for close to a decade, and in many cases, often reach their full funding goal within hours of going live. Throw open the saloon doors and introduce the RUR MORGUE readership to the plight of The Redhead.

THE FEW AND CURSED all started with The Redhead, and she’s the driving force for what we’ve been doing. The way it started is Fabiano Neves, the co-creator, I invited him to come up with a three-page short story. I asked him what his favorite genre was, and he said he grew up reading Westerns, but he’d never had the opportunity of working on one. I studied Westerns in film school and knew the tropes and rules and how the genre plays out, so I was like, ‘Listen, I’m not a fan, but I’m ok with it if we give it a twist.’ That first three-page story had The Redhead going into a saloon and everyone around her is dead. You think that she’s a murderer, but in reality, everyone around her was some sort of zombie or something close to it, and she killed them all. She ended the curse which turned the whole town into creatures. Both Fabiano and I enjoyed the character so much that we decided to do something else with it, and that’s how we started working on “The Crows of Mana’Olana” saga. I wanted a reason behind these monsters existing in this world, and at the time, São Paulo, Brazil, was going through a terrible drought. We had to ration our use of water in the city, and I thought that was the perfect background. This is a world where water is so rare that it’s seen as currency. That phenomenon that dried up the world also opened it to the gates of hell. It’s a supernatural Western set 70 years after a mysterious apocalyptic event. It has a little something for everyone and it’s cool to see how organically it was created. 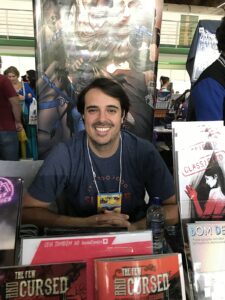 With an all-encompassing universe that already includes comics, board games and trading cards, an audio project seemed like a no-brainer. How did those stars align?

That was actually suggested by Encyclopocalypse. I’ve always read comic books, and they were already a big part of my career, so comics felt natural. The cards followed because I’m an avid collector, and I wanted to have my own cards. The whole way that we move this IP along all these different products happens organically; It seems that we have a plan, and we execute it very meticulously, but that’s not what’s happening. I love telling the story of how the board game came to be because it involved a fan. I was running a Kickstarter for one of the comic issues, and Mike Gnade from Rock Manor Games was running a Kickstarter for his board game Maximum Apocalypse, and then, this fan reached out to me and Mike separately and told us that we needed to talk. He had an apocalyptic-themed game, and we had an apocalyptic-themed comic book, and we shared similar creative visions. I reached out to Mike, and we decided to make a game, so you see how these things just happen! Along the way, I was introduced to Mark [Alan Miller, owner of Encyclopocalypse], who encouraged an audiobook. We’re finding out our path as it develops underneath our feet.

THE FEW AND CURSED collaboration with Encyclopocalypse isn’t relegated to only an audiobook. There’s a disc full of songs inspired by The Redhead, headlined by the multi-talented duo of Lily and Chris Desmond. What can listeners expect?

We’ve always had a tough time finding a balance between genres. Is this a Western? Or is this horror or supernatural? I love that we navigate through all those waters because it gives me a lot of creative freedom. Both Chris and Lily felt the same way. We have elements like the guitar, violin and some of the more classical Western instruments playing the soundtrack, but we’re also doing a horror thing, so there’s a lot of scratching and weird interactions in the middle of the music. I think Lily was just the perfect choice because she’s a huge fan of The Redhead – to the point where we brought her in to do the music and she wanted to also try her talents at voicing the character. We tried different voice actresses, and Lily was the best! She’s also going to play The Redhead in the other books, which is truly exciting. In terms of her music, she plays a lot of instruments – I think the fiddle is her weapon of choice – but she’s dynamic in that she can play the guitar and the piano and bring all those elements onto the table for an interesting mix. And I didn’t know at the time, but I was surprised to learn that she’s a nerd in the best way possible! She started studying slang and words from that specific period so it would influence her lyrics.

This is touted as an “immersive” audio experience, characterized by instrumentals and sound effects that seem to be emanating from varying locations. Such a decision, while seemingly a huge undertaking, almost seems necessary to compensate for what would normally be conveyed through sequential art.

When we started discussing it, we knew that we wanted to have original music for the audiobook, but I approached it as how I would like to experience THE FEW AND CURSED musically. I listen to music every day, but I always do it to set moods. For instance, if you open my Spotify, you’re going to find hundreds of film scores. Part of my creative process is spending a few hours coming up with the perfect playlist for whatever it is I’m writing. I can’t write a comedy scene without some funny music in the background, and [the same] goes for horror. What I wanted was for people to have some cool music to listen to while playing the board game and reading the comics. Usually, when I’m reading something, I’m listening to music. And I played the board game a few times, and we always had music in the background. Depending on the crowd that I’m with, they’ll put on pop or rock, but we thought how cool it would be if you can listen to THE FEW AND CURSED music while playing the game, and that’s how I put it to Chris. He was the one that told me about immersive mixing, where you can have a guitar here and scratching over there – elements that are maybe not as musical in the soundtrack but kind of set the mood.

Producing an audiobook or musical score is a far different beast than drawing –  was it a challenge you were prepared for?

I think I’ve been very blessed in that I haven’t come up with a single collaborator that I’ve had trouble working with. I told you how Mike and I met randomly through a backer that had supported both our projects on Kickstarter, but I think that one of the key reasons that we decided to move forward is that we saw a lot of ourselves in each other. The collaborative process with Mike was fun because it’s not like he had this board game idea and just slapped the skin of THE FEW AND CURSED on it; He read the books and distilled them into an immersive interactive gaming experience. As far as the creative part of it, it’s been a lot of fun and definitely out of my comfort zone. The people I’ve been working with really welcome my creativity. I’m excited to be tackling all these things. It’s a lot of work, and there’s a lot of stuff that I don’t understand, and to your point, it surprises me how long we’ve been doing it because we’ve been putting out a book or two every year. That’s not a lot; It’s not like we have a monthly series. People don’t seem to get tired of waiting, and I’m not worried about them getting tired of my material because it’s a pretty rich playground. There’s a lot we can do with this, but when you’re putting out only 40 pages of story per year, it impresses me how people keep coming back and their support never winds down.

For the latest on THE FEW AND CURSED, follow their Kickstarter page here.