Game Review: “The Beast Inside” is a confused romp through two narratives

THE BEAST INSIDE began as a Kickstarter project from Polish indie developers Illusion Ray Studio and gained a fair amount of hype through its demo, which has been kicking around various high-subscription YouTube channels. I was initially drawn to it for two reasons: it uses photogrammetry to create highly detailed environments, and it features a dual narrative that takes place in two different time periods. Cold War spy intrigue! Victorian ghost stories! Both in one game! Could it possibly live up to my self-imposed hype? The answer is complicated. Due to lack of originality and over-reliance on jump scares, it’s not quite a yes, but some intriguing story elements and appealing visual design still make it worth the $24.99 price tag.

It took me 8 hours to play through 13 chapters on Standard mode. In Chapter 1, it’s 1979 and you’re Adam Stevenson, a cryptanalyst for the CIA who has just moved from Boston to the countryside with his wife, Emma, to work on deciphering pesky Soviet code far away from the noisy city. The house they’re moving into is a fixer-upper, but it has a lot of history, as you’ll soon discover. Cut to Chapter 2 – it’s 1864 and you’re Nicolas Hyde, a young man who grew up in Adam’s new house. After a difficult childhood, Nicolas spent 10 years in an asylum, and now he has returned home to face his past. Adam finds Nicolas’s journal entries scattered around while he explores the house and the surrounding area, and you switch between the protagonists as the two narratives increasingly become connected.

Adam’s chapters take place primarily in the daytime and consist mainly of exploration, making them feel like breathers in between the real action. He’s equipped with a quantum location device that, through some farfetched pseudoscience, lets him detect energy traces of people who have been in the area before him. I thought the device was an unexpectedly fun addition to the exploration element. There’s a bit of a campy feel to THE BEAST INSIDE that often acts as its saving grace, and I think it excels when it embraces that campiness.

Along with exploring and playing with quantum mechanics, Adam uses his codebreaking abilities to solve ciphers. I didn’t find these puzzles challenging at all (the first one basically amounts to following instructions), but I did welcome them as an extension of Adam’s character, which is otherwise underdeveloped. Aside from a few nitpicky marital arguments, I don’t feel like I got to know Adam or Emma enough to fully care about the direction their story took as opposed to Nicolas, whose story is predictable but fleshed out. 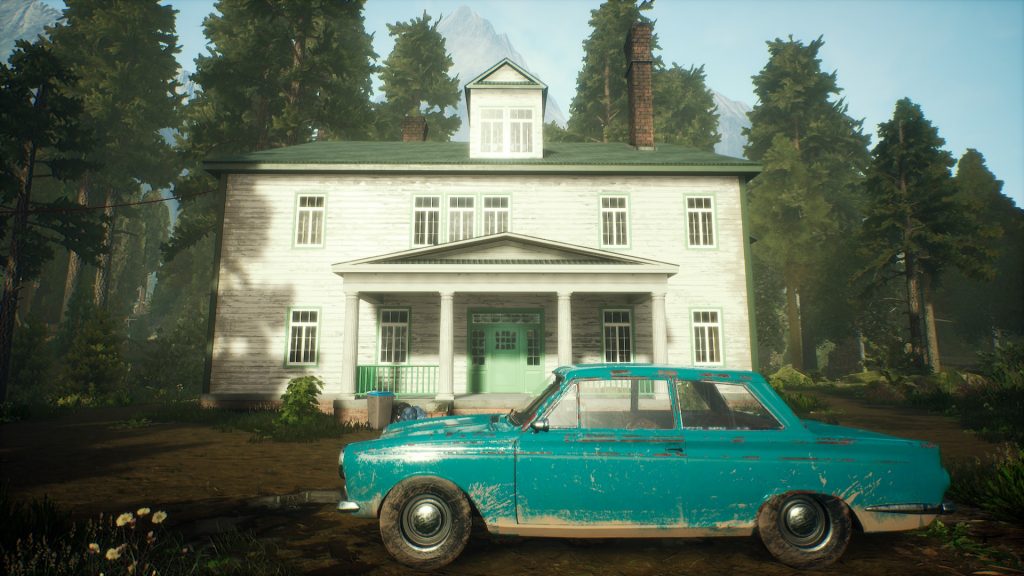 Poor Nic gets the darker end of the bargain. His story takes place during the night as he tries to solve a murder that his father was somehow involved with. You’ll encounter various ghosts that, in typical fashion, you must either run from, hide from, or in one case fight. You’ll also find matches and kerosene scattered around to light candles and your trusty lantern, but in my standard difficulty playthrough there didn’t appear to be any consequences for losing light besides, well, not being able to see quite as much. I found more than enough matches and kerosene for that to matter anyway. By the end I felt like I was hoarding fuel, and refilling my lantern became tedious. It seems like the lighting idea was thrown in solely to make the game more like AMNESIA: THE DARK DESCENT, but without the added insanity mechanic, it really has no significance other than giving you something to do while you explore and contributing to your Steam achievements.

Both protagonists can examine objects, read documents, and use various items to move through tricky areas, such as pulling down ladders with a hooked rope or dragging boxes around to reach higher places. The physics felt smooth for the most part. There were some awkward spots where doors would immediately shut again if I opened them too quickly or objects didn’t drag in the direction I pulled them, but I did have a good time with the physics-based puzzles. Both protagonists also deal with the oft-controversial quick-time events, but they were implemented seamlessly enough here that I didn’t mind them.

Combat is nonexistent aside from one area where you wield a revolver against a particularly vengeful antagonist. Being stalked by him escalates into a boss fight complete with different stages where you need to find a rhythm between attacking and running. It was probably the most fun I had during the game, and I kept wishing for another boss fight like it but was ultimately disappointed. I would like to have experienced more of this combat interspersed with the chase and stealth sequences. 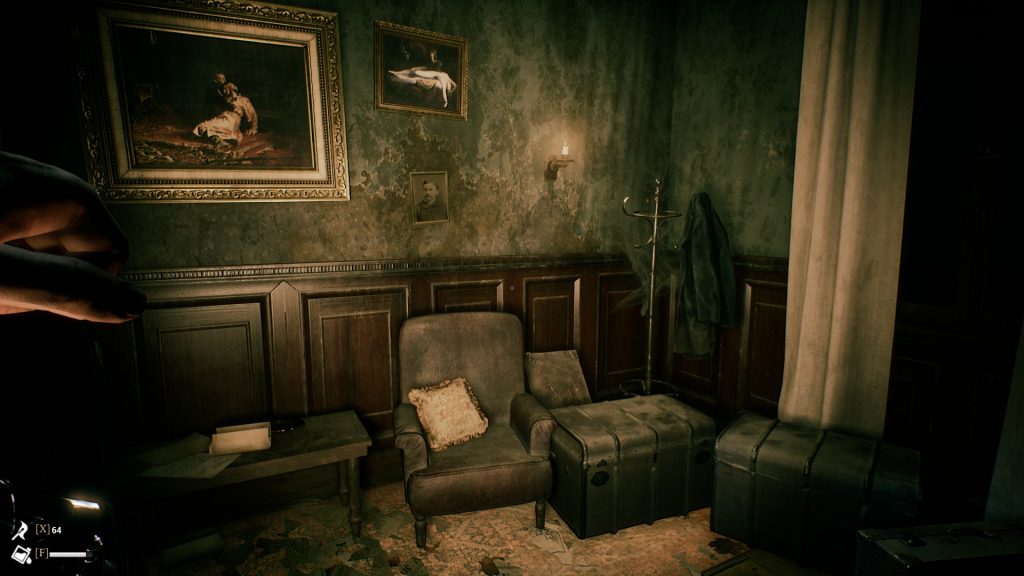 My biggest issue with this game is that it feels like it doesn’t know what it wants to be. The Kickstarter page mentions that the devs took inspiration from their favorite games, including RESIDENT EVIL 7, P.T., AMNESIA, and FIREWATCH. THE BEAST INSIDE feels like all of those, which could be great, but the problem is that the devs relied on those games so much for direction that the end result feels like it’s struggling to find its identity. And because THE BEAST INSIDE wears its influences on its sleeve, it’s impossible not to compare it to them, which means I sometimes found myself feeling nostalgic for another game rather than fully immersed in the one I was playing. For example, there’s a swamp environment that looks like it could have been lifted from RE7 with a “boss” that echoes RE7’s Marguerite Baker. At one point, I found myself in a fire lookout tower that was so familiar I expected to hear Delilah from FIREWATCH come crackling through a radio at any second. You’ll encounter an apparition that hangs out on landings and stares at you, but I couldn’t figure out what it had to do with the story besides reminding me of P.T. every time I saw it. There’s even a mine sequence that was basically copy-pasted from THE VANISHING OF ETHAN CARTER. Nods to other games are all well and good, but they can be done more subtly so that the main game doesn’t seem like it’s having an identity crisis.

While the environments are familiar, the game does look pretty. Built in the Unreal engine, it uses photogrammetry to great effect. In the daytime, you get exquisite sunlight filtering through the windows and trees (complete with lens flare), and at night, you get dust particles swirling in lantern light. The assets are detailed as well, and you can interact with almost anything. All you can really do with most objects is throw them, though, and it’s clear what you should be interacting with and what’s just there to be thrown around willy-nilly. 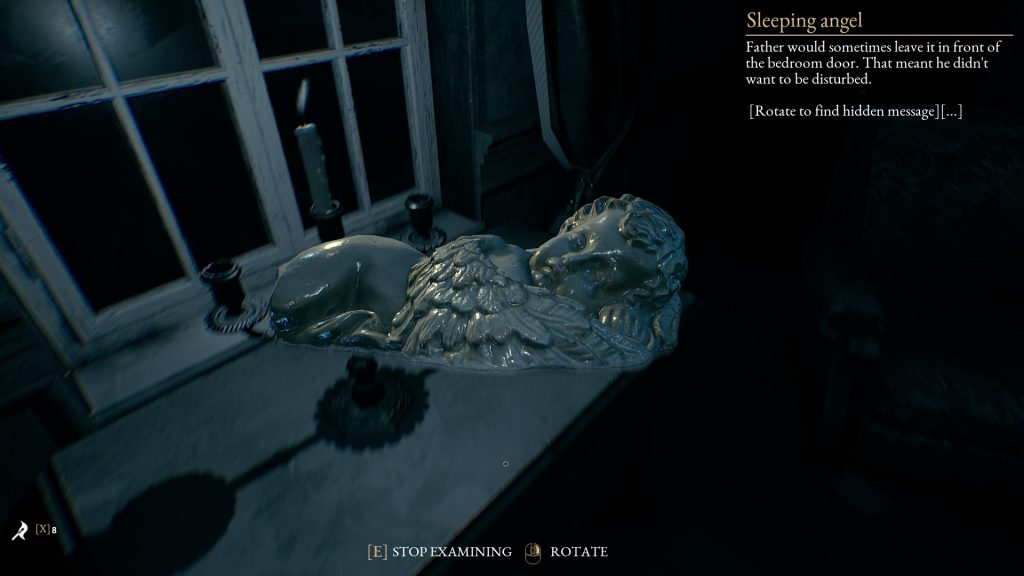 As with any horror game, sound design is immensely important, and THE BEAST INSIDE excels there as much as it does with graphics. During the day, atmospheric sounds of wind blowing, birds chirping, and water rushing add to your scenic exploration, while at night you hear otherworldly whispers, creaks, footsteps, and scratches, making it imperative to play with headphones. The orchestral background music is lovely, going a long way in setting each scene. Some of the voice acting sounds stilted and borders on cheesy, but both Adam and Nicolas sound great, each reflecting their time period and conveying the proper emotions without going overboard, which is good because you’ll be hearing them the most.

It can’t go without mentioning that the jump scares in THE BEAST INSIDE are excessive, which could be forgiven if they were well-placed. Some of them are, but they mostly feel cheap, like crows flying in your face and random ghosts whooshing through you, and they’re too often predictable, especially in the latter half of the game when you’ve caught on to its penchant for jump scares. The moments when tension is allowed to build are great, but they’re regrettably short lived.

It’s been a long time since I’ve felt this conflicted about a game. On one hand, I think there are seeds of a great game in THE BEAST INSIDE. It looks and sounds beautiful, the environments are detailed, and the psychological elements of Nicolas’s story are satisfying if predictable. On the other hand, varying ideas that are borrowed liberally from other games contribute to an overall lack of identity, and it relies too much on cheap jump scares. The ending seems to indicate a sequel in the works, and I’m interested to see what the devs can do if they let go of their influences.