Arcade games are designed to be hard. Take Capcom’s GHOSTS ‘N GOBLINS for instance, undoubtedly one of the most notoriously difficult titles to ever grace an arcade cabinet.

Having already been re-released and ported to various consoles since the original’s 1985 debut, the Japanese developer has brought the series back once more for its 35th anniversary in the form of GHOSTS ‘N GOBLINS RESURRECTION, now available on the Nintendo Switch and coming to other systems later this year. Don’t be fooled by its hand drawn visual style and modern additions to its gameplay mechanics, however, as RESURRECTION is capable of being just as punishing as its source material.

As legendary knight Sir Arthur, players don the iconic plate armour as he traverses numerous perilous stages in hopes of rescuing Princess Prin-Prin from Astaroth, king of the Demon World. Take a hit along the way, however, and Arthur will soon be sporting no more than his undergarments to protect him from all manner of dastardly devils. 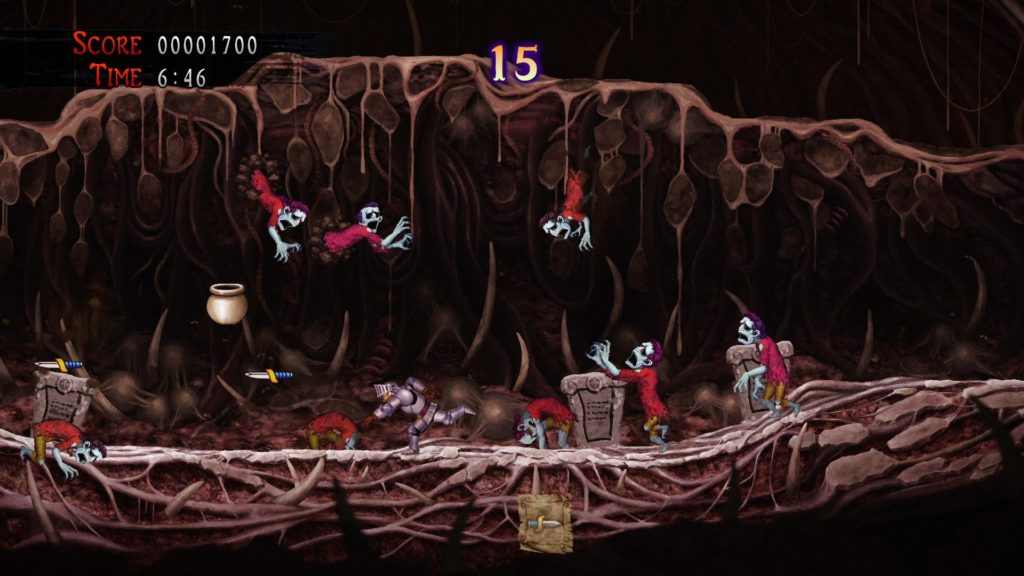 Running entirely in Capcom’s RE Engine, it’s as if the original arcade cabinet’s artwork has been made playable. Series creator Tokuro Fujiwara returns to direct RESURRECTION and provide his iconic designs, and though it’s a far cry from the classic pixelated style, the results are beautiful to behold while in motion. A gorgeous animated intro unfolds across a large scroll, introducing some of the game’s newly added elements like the Umbral Tree and the collectable Umbral Bees that inhabit it.

This tree, along with its glowing winged creatures, serve as the basis of RESURRECTION’s new upgrade mechanic. Bees will pop out from hiding as players progress through each of the game’s stages, and upon completion of each level these critters can be returned to the tree in exchange for powerful new abilities.

These upgrades include calling upon a thunderstorm to fry foes in every direction, changing Arthur into a rolling boulder, and transforming enemies into harmless frogs – a power previously exploited by the magician enemies found in the original game. The use of these abilities is entirely optional and purists shouldn’t feel too bothered by their inclusion here, though it’s probably a good idea to take advantage of them as frequently as possible considering that RESURRECTION is hardly a walk in the park. And yes, you still have to beat the entire game twice to actually conquer Astaroth.

Despite having adjustable difficulty levels – Knight and Legend being closer to the original game – RESURRECTION will still test its players’ side-scroller abilities regardless of what one they select. A handy “page” checkpoint system on the game’s easier settings makes jumping back into levels a breeze, and Sir Arthur is able to sustain more than just two hits before being reduced to a pile of bones. 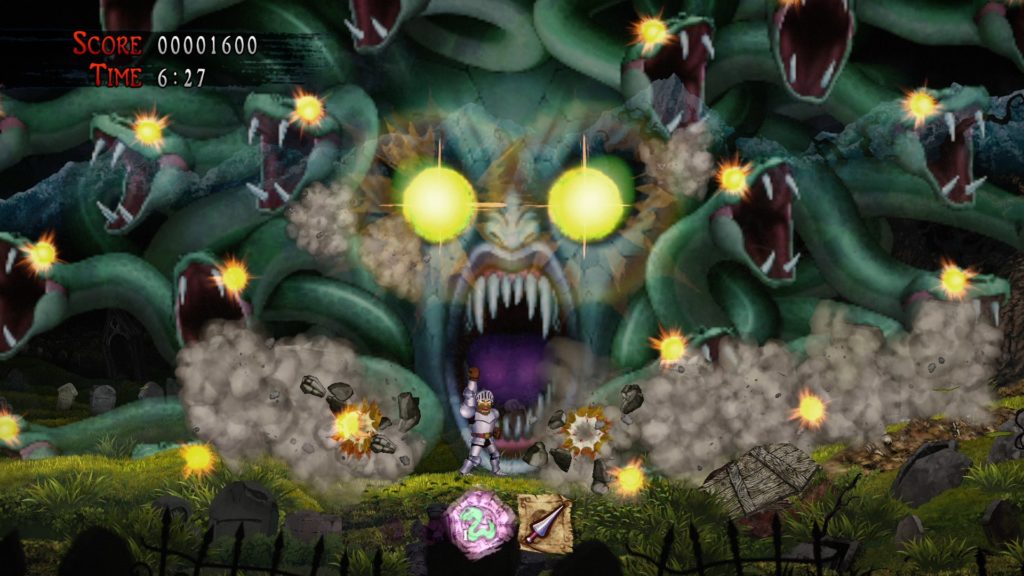 While occasional sections of some stages serve as recreations of the original game, many are entirely new, and the addition of several showpiece boss battles gives RESURRECTION a flavour unique unto itself.

One noteworthy fight is an aerial battle on the back of a flying dragon, with Arthur chipping away at the beast’s lengthy body before reducing it to just an angry floating head. An encounter this grand just wasn’t feasible in 1985, and RESURRECTION consistently makes good on the advancement of technology and more recent side-scrolling games in general.

So if you’re a fan of this classic series but have perhaps been holding out due to GHOSTS ‘N GOBLINS RESURRECTION’s ornate stylings, rest assured that there’s still plenty of joyously rage-inducing moments to be had here.

Now… how about another DEMON’S CREST, Capcom?

Ghosts ‘n Goblins Resurrection is out now for the Nintendo Switch. Review copy provided by the publisher.