While there have been some incredible handheld gaming systems throughout the years, a short-lived yet endearing device is finally getting some much needed love on the reigning handheld champion, the Nintendo Switch.

Gathering six previously released titles and throwing in four new ones, the NEOGEO POCKET COLOR SELECTION VOL. 1 is a nicely curated collection of games that made the system so impressive when it first launched in 1999 – though it may be a steep asking price for players who’ve already bought a sizeable share of its content.

Breaking into the handheld market in 1998, SNK’s first attempt was the Japan-exclusive NeoGeo Pocket, a 16-bit monochromatic system that didn’t prove as fruitful in terms of sales as the company hoped. Its successor, the NeoGeo Pocket Color, was released one year later in Japan, North America, and Europe.

Sadly, SNK as a manufacturer was already in its death throes at this time, and despite the Color’s impressive collection of launch titles, many gamers were very likely too busy playing POKEMON RED and BLUE on their Game Boy Color to pay the system any mind. It’s a shame, as the NeoGeo Pocket Color’s attempts at porting classic SNK franchises are an absolute blast to play.

Six of the 10 games found in the NEOGEO POCKET COLOR SELECTION VOL. 1 have previously seen individual releases on the Switch’s eShop, these being SAMURAI SHOWDOWN! 2, KING OF FIGHTERS R-2, SNK GALS’ FIGHTERS, FATAL FURY FIRST CONTACT, THE LAST BLADE: BEYOND THE DESTINY, and SNK VS. CAPCOM: MATCH OF THE MILLENNIUM. 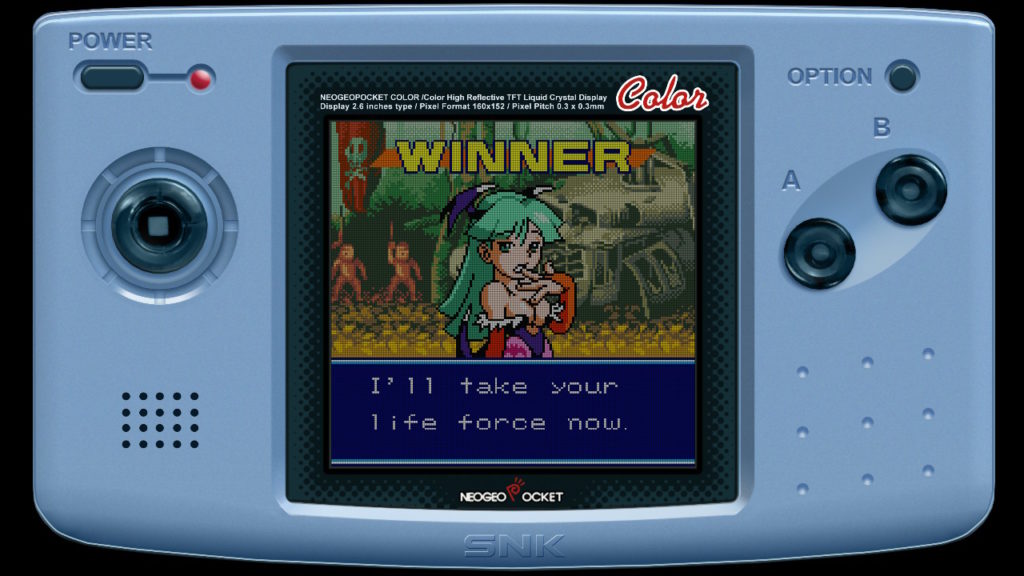 Of these new additions, DARK ARMS is unquestionably the game that horror gamers need to be aware of. A spin-off of the SNK arcade rail shooter series BEAST BUSTERS, it’s a surprisingly robust RPG that sees players defeating and capturing ghoulish enemies, feeding the energy to their firearm, and evolving these weapons into spookily powerful forms with mysterious “Seeds” and “Oums.”

Horror fans familiar with the METAL SLUG series thanks to their inclusion of zombies since METAL SLUG 3 should delight in seeing that franchise represented in 1ST and 2ND MISSION, though there’s some notable slowdown to be found when picking up power-ups or in moments of heavy action. These are hardly game-breaking, however, and it’s nice to see that these handheld variations still hold up as being a ton of mayhem-filled fun.

The last of the new additions, BIG TOURNAMENT GOLF, takes the basic structure of the NeoGeo’s NEO TURF MASTERS and, well, makes it a whole lot cuter. Classic golfers are rendered in an adorable “chibi” style, and there’s a good amount of courses in a variety of countries that’ll keep players busy for a decent amount of time. 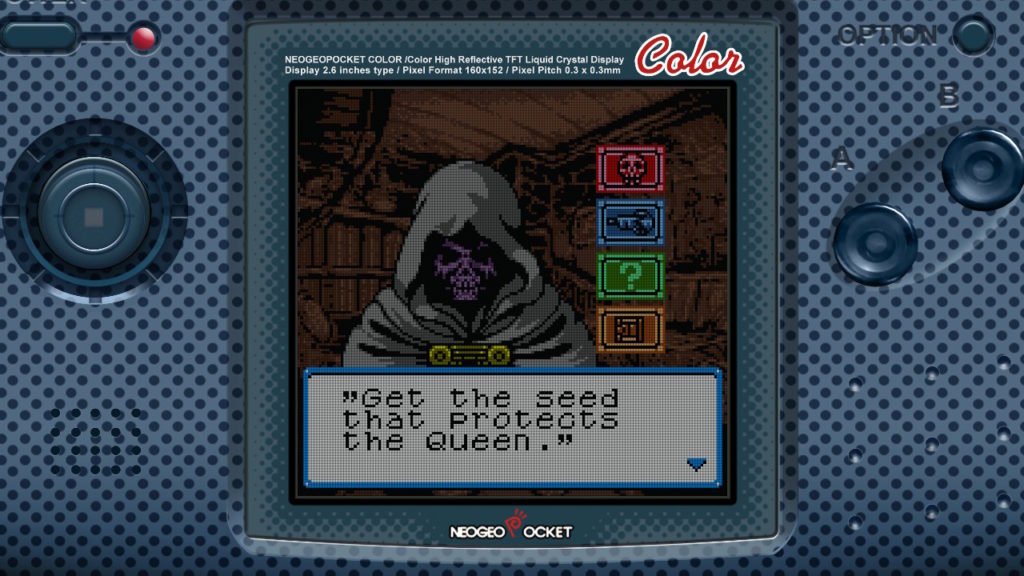 The NEOGEO POCKET COLOR SELECTION VOL. 1 does a great job of presenting all 10 games here, and rotatable high-resolution scans of each title’s box art and manual are accessible from the pop-up menu. Players also have the ability to switch out hardware modes to the monochromatic original “Pocket,” “Color,” or “New Color” before firing up each game.

Console skins can also be adjusted on the fly, and the full range of NeoGeo Pocket Color designs are present as well. The collection also makes use of the Switch’s touchscreen with fully functioning virtual on-screen buttons and a joystick, and 2-player functionality that’d normally be found with the Pocket Color’s link cable is present in a clever split-screen mode.

For those looking to revisit this classic handheld or play for the very first time, the NEOGEO POCKET COLOR SELECTION VOL. 1 is an easy recommendation. With a sublime selection of the best titles the system has to offer, VOL. 1’s attention to detail rightfully honours a criminally undervalued system that had some true SNK gems.