Game Review: Gather up some quarters, consider skipping your next meal for “BLOODWASH” 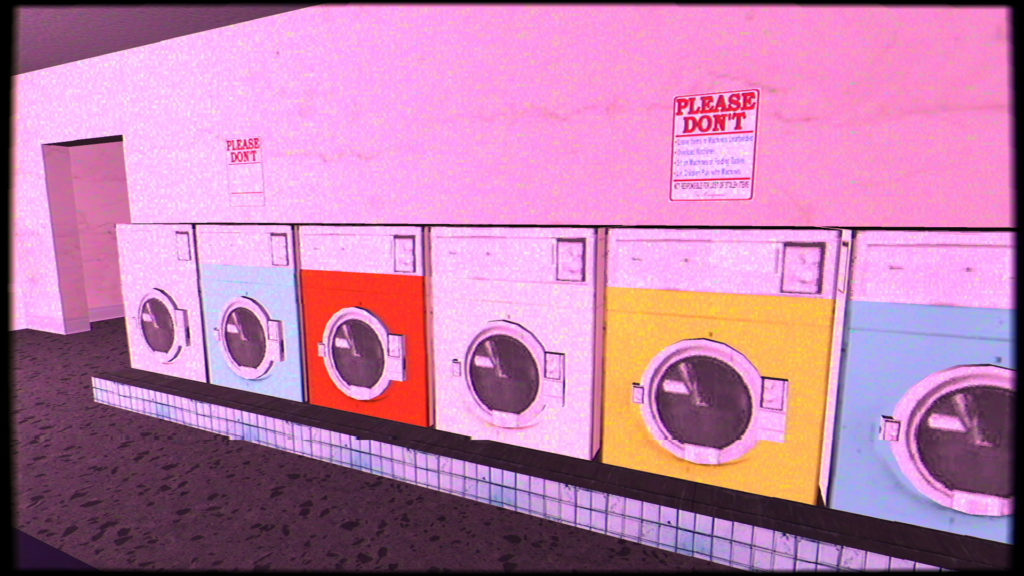 As Sara, a pregnant college student living with her slacker, alcoholic partner in their rundown apartment complex, players begin BLOODWASH trying to prepare for a job interview the next day. Discovering that the basement’s washing machine is broken and realizing she doesn’t have anything presentable clean enough to wear, Sara gets a tip from a resident down the hall and sets out for the only 24-hour laundromat somewhere on the edge of town. It’s then that she learns of the “Womb Ripper,” an active serial killer that’s targeting soon-to-be mothers and, well… you might be able to guess the rest.

Split up into six chapters, BLOODWASH effectively builds tension with investigative gameplay and a variety of entertaining diversions scattered about its central environment, a seedy strip mall. Sara can enter each of the surrounding places of business, such as a pizza parlour, appliance store, and all-in-one shop complete with horror VHS tapes and retro games called “Peepaw’s.”

Rife with references to Jordan King’s earlier Atari-influenced itch.io titles, as well as SkiFreak, the Puppet Combo Patreon-exclusive SkiFree tribute from last year, BLOODWASH contains several single-issue, fully-illustrated comic books that are readable and sporting unique art styles and story concepts. Clues in the form of newspaper clippings, photographs and an unsettling severed mannequin head can also be collected and brought to characters found throughout the game, slowly shedding sinister light on the Womb Ripper and the plaza’s dark past.

Much like MURDER HOUSE and Puppet Combo’s previous work, King and Hoare utilize a warped VHS tape visual filter that paints BLOODWASH with a deliciously distorted style. It’s one thing to know a crazed slasher waits just beyond the shadows, but when you add the undulating tracking lines into the mix to further obscure the player’s vision, it’s a recipe for sheer terror. Characters retain enough detail to differentiate them from actual PS1 models, yet preserve that rougher polygonal shape that contributes an aura of otherworldliness that fits BLOODWASH’s feelings of nocturnal unfamiliarity.

There are plenty more surprises in store for those brave enough to venture out into the night in search of some cleaner attire, but if you’re intrigued by anything I’ve highlighted here, it’s best you strap in and set out on this gory ride for yourself. Just make sure you’ve got the bus fare and an iron stomach BLOODWASH means business.

BLOODWASH is available now for Windows and Mac on itch.io and Steam. Review code provided by the publisher.