Friends ’til the End: Brendan Meyer on surviving “THE FRIENDSHIP GAME”

Emotions (and hormones) run hot in our teens and twenties. Life and love are fresh. Every mistake seems an earth-shattering tragedy. Every success feels like a triumph. Consequently, the bonds of friendship we forge in youth seem unbreakable. Although we’re certain, at the time, that our cherished high-school relationships will last forever, they rarely do. At its core, THE FRIENDSHIP GAME is an exploration of the fragility of that closeness we only know as teens.

In the film, a group of small-town teenagers (led by Cobra Kai‘s Peyton List) stumble upon a sinister yard sale find, a relic described as a “game” that will test the strength of their friendship. The only rule is that they must honestly reveal their deepest desires. However, the game carries with it a curse, and as their most heartfelt wishes are seemingly realized, their lives spin into chaos as alternate versions of reality collide. 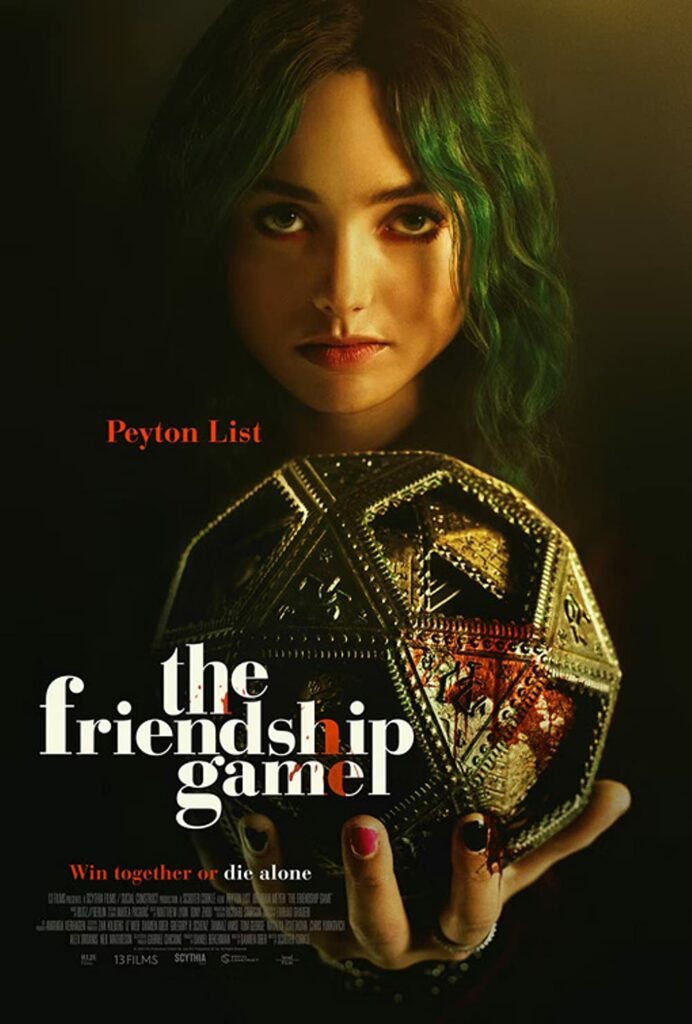 Brendan Meyer (Color Out of Space) co-stars as Rob, the only male member of the group, whose carnal aspirations take a murderous turn. Meyer recently took some time to sit down with RUE MORGUE to talk about this new sci-fi horror thriller.

In many ways, THE FRIENDSHIP GAME defies genre. In just a few words, how would you describe it?

It’s about four friends who are in their last summer, between high school and college, and they’ve been really tight all through high school and maybe even longer. They sort of are at a moment where their friendship is being tested in real life by this coming separation. They’re going to college in different places. And then, they find an object in a yard sale that has kind of supernatural properties, maybe. I’ll leave people to discover that as they watch the movie, but that sort of tests their friendship in a whole new way. So it’s sort of about the combination of some very real relatable human friendship struggles, and then something that is very much not of our world.

You have quite a few horror credits. What keeps you coming back to dark material like THE FRIENDSHIP GAME?

To be honest, oftentimes these are things that I’ve auditioned for, and the directors are always so smart – so on the ball. So it’s just I’ve sort of been a part of so many great creative teams being on these projects. And I think what takes me back to [horror] is it’s fun to kind of keep going back to a specific genre. I think every genre, whether you’re an actor, whether you’re a cinematographer, or the director, kind of has its own rules and its own language and its own inspirations and things that reappear – or things that you’re trying to subvert or do differently. I think the more experience you have being involved in those kinds of films, the more you can bring to the next one. I think that that’s one thing that I enjoy. So I enjoy going back. I have been lucky enough to have more experience in horror than a lot of other genres. And it’s fun to keep coming back to it.

How did you get involved with THE FRIENDSHIP GAME? What attracted you to it?

I did an audition. And I only did one audition, and then got it. So it wasn’t too long a process, but it actually was a long wait because apparently, they were supposed to shoot in the early part of 2021. And it got pushed. So I auditioned and didn’t hear anything. As an actor, [if] you don’t hear anything, you just forget about it. You just have to, especially if there was no callback or anything. So you just send a tape out, and you don’t hear anything so you’re like, “Well, on to the next one.” So then, it was five months after the audition that I heard from my agent. “Hey, THE FRIENDSHIP GAME, that’s looking promising for you. I think you might get that.” And I’m like, “Isn’t it already filmed?” Because I didn’t know got pushed, you know. I didn’t even know it was still alive. So it’s actually kind of nice. It’s kind of nice when you don’t have to do another audition. So that was kind of a happy surprise that this thing that I had auditioned for way back and that I really liked [was happening].

What drew me to it is that balance of real human stakes, and it seemed like it was going to be a really fun, crazy ride. Even reading it the first time it was sort of hard to pin down exactly where it was going or what was gonna happen next. That’s fun. And not everything is like that … It was exciting and had good writing and good characters.

There’s real moral ambiguity in all of the characters in THE FRIENDSHIP GAME. How did you approach playing Rob? As an actor in an ensemble that’s portraying a group of lifelong friends, how do you develop that chemistry to make the relationships believable?

First and foremost, it’s about setting up a real group of friends and connecting with the actresses. Thankfully, that came very naturally. They’re all great and we’re still actually friends, so that was actually pretty easy. We just kind of got to show up and kind of show the blossoming friendship that was already happening. I think that was important because you want to set a bar for the character, where you see why people would be friends with him, why he’s a nice guy. There’s a really interesting arc for the character.

And there is like, you’re saying, moral ambiguity. I think that’s something the director, Scooter Corkle, did a good job of showing. It’s not just the moral ambiguity but the ambiguity of this friendship game. The object affects people in different ways and changes reality and turns people against each other. And so one of the things that was interesting in the process of prep and on a scene-by-scene basis was figuring out where Rob is in the wrong as a human being, and then also, where Rob is just kind of being manipulated by the game … It’s a different kind of character journey when there are unseen forces. So that was super fascinating – balancing all that, and at times, choosing one or the other, and at other times, just allowing it to be ambiguous. I think that sometimes, that can be something a director can really help you with – teasing out the ambiguity in that way. Sometimes as an actor, you want to make a choice of something. And sometimes it’s nice to do things a couple of different ways and give everybody options.

We’re used to seeing alternate realities in films like the Marvel movies in which the stakes are huge, world-ending events. THE FRIENDSHIP GAME takes the consequences of exploring different timelines and realities and brings them down to a personal level. Do you subscribe to the concept of the multiverse? What do you find compelling about the idea of alternate dimensions?

Hmm. That’s a good question. I don’t know if I fully subscribe to it. It’s an interesting thing to think about … Every day, you’re going out and you’re interacting with people and making active decisions … It just feels like, there are so many different things that can happen. And the older you get, the more you think back. You go, “Wow, man, if I hadn’t said that one thing to that one person, they wouldn’t have invited me to that thing, and then, I wouldn’t have met these four people who I’m friends with.” You start to play those games where you realize that it’s really hard for us to know these things at the time. So often, the smallest little decisions can have these massive ripple effects in your life. And so I think it’s kind of fascinating to think about all those different possibilities. Some of this is baked into the themes of the movie, too. And then, some of the time, what you have is what you got, so you got to focus on the friends you actually have now, that relationship you actually have now, the career stuff you actually have now because there really isn’t much opportunity at this point, as far as I’ve seen, to explore any of those other possibilities.

You just take comfort in the possibility that maybe somewhere, there’s another you, who lived out that ideal situation, or maybe even a worse one.

Yeah, exactly. Both [scenarios] are comforting in their own ways.

Finally, what do you hope audiences take away from the film?

THE FRIENDSHIP GAME from RLJE Films is available now on digital and on-demand.

William J. Wright
William J. Wright is a professional freelance writer and an active member of the Horror Writers Association. A lifelong lover of the weird and macabre, his work has appeared in many popular publications dedicated to horror and cult film. He lives in Knoxville, Tennessee, with his wife and three sons.