I want to tell you a story about…flowers…and…attics. This is the story of Joan Crawford, a disgraced former actress who experiences financial ruin after her role in Johnny Guitar Too: A Very Johnny Musical and is forced to move back home with her mother, aptly named The Grandmother. Joan faithfully brings her ungrateful children with her: Christina, Christopher, Cathy, and Cindy. Living with her estranged parents in their Virginia mansion isn’t easy, but Joan makes the best of a hard knock life, always finding the time to visit Christina and teach her the importance of modest living (“Four people to a room is luxury, Christina darling”) and the value of arsenic in dessert (“A dash here, a dash there, and all your guests will have a gay time!”) From Brentwood to Foxworth Hall, the fun never stops for the Crawford clan.

Okay, so maybe the above description does not describe the classic I am covering this week, but it could be and that’s what matters. *Sigh* This week I’m dishing on 1987’s FLOWERS IN THE ATTIC, the mostly incest-free adaptation of V.C. Andrews’s hit novel. Starring Louise Fletcher (who has many noteworthy credits to her name, sure, but I love her so much as the aunt-with-theater-tickets in Cruel Intentions an will take any opportunity to highlight that), Victoria Tenant (War and Remembrance), and Kristy Swanson (vaccine skeptic, Buffy the Vampire Slayer). The film’s score might tickle a few familiar ivories as it is helmed by Christopher Young of Hellraiser fame, but where Hellraiser’s score gave you puzzle box chills, everything Young does for this film is pure music box terror. The film runs a respectable 90 minutes and was written and directed by Jeffrey Bloom. Rumor has it Sharon Stone auditioned for a part. Moment of silence for how great that would have been. 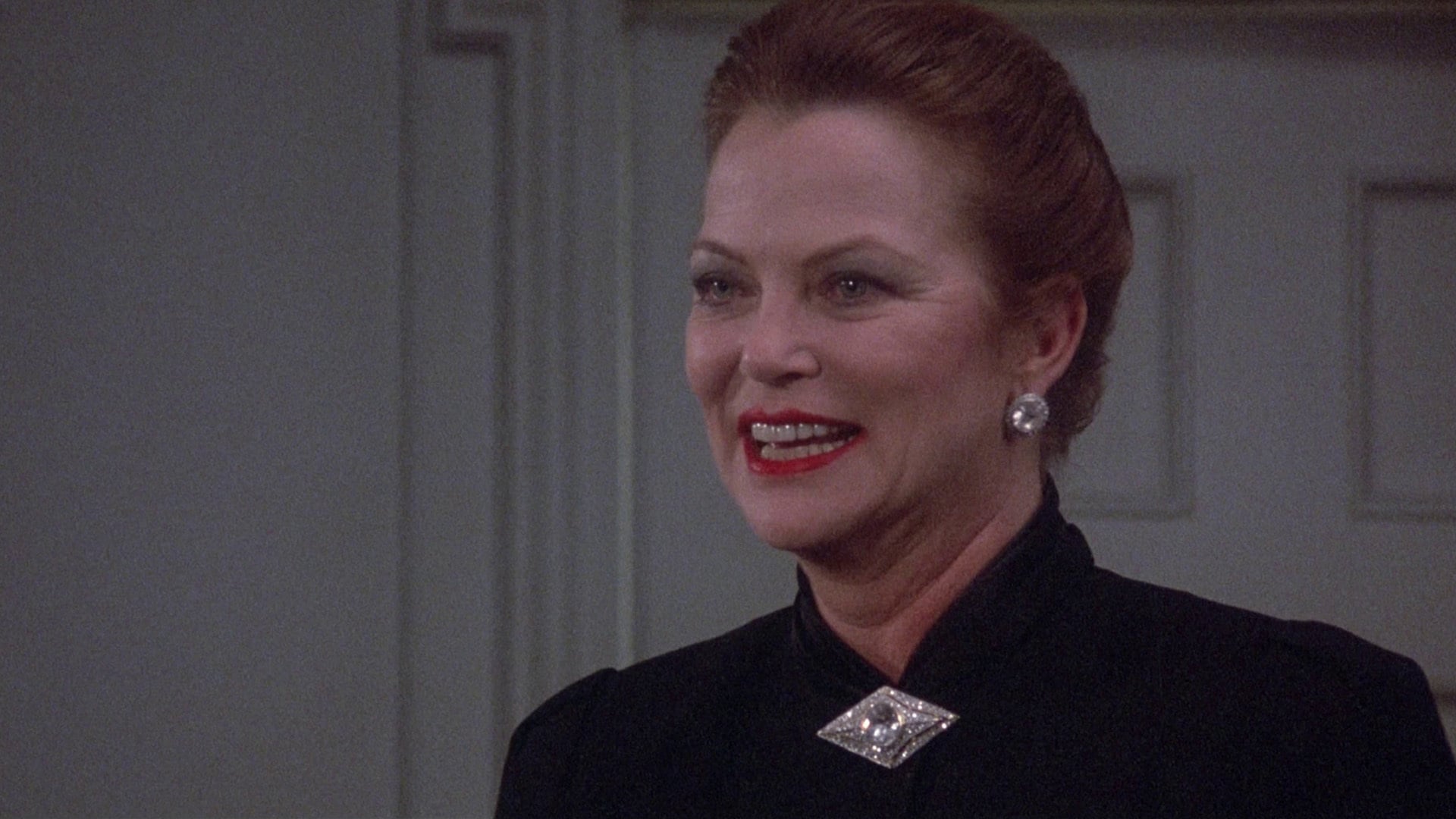 A friend introduced me to this movie during Lockdown the First, and despite being totally disgusted with the subject matter, I quickly ordered all the V.C. Andrews books I could find and devoured nineteen of them. No one goes to a dinner party and announces their love for V.C. Andrews; I already get enough dirty looks when I confess how I spend all my free time in bed reading Jackie Collins. Despite the inappropriate horror of an Andrews book, you can’t deny there’s something appealing about them. Everything she does feels like Mommie Dearest fan fiction and I don’t hate it. Are we all freaks for liking FLOWERS IN THE ATTIC, or it just me for bringing this conversation to Rue Morgue? And more importantly: we’re all rooting for The Grandmother (Fletcher), right?

FLOWERS IN THE ATTIC opens with a Nazi daydream of the perfect family. Everyone is blonde and the house is filled with pastels as if every day is a celebration of Easter bunnies and potpourri. But tragedy strikes the Dollanganger family, and matriarch Corinne (Tenant) takes her four children to live with their grandparents in Virginia. They travel by night, alarmed and affronted when there’s no one to greet them at the bus station. Once at Foxworth Hall, The Grandmother ushers the children to a room in the servants quarters, as far away from The Grandfather as possible so as not to disturb him. At first, Cathy (Swanson) and Christopher (Jeb Stuart Adams) object to sleeping in the same room with their younger siblings, but The Grandmother informs them this is how things are to be. The Grandmother is fabulous by the way. The pages of her Bible are lined with gold, she wears floor length black dresses and a beautiful silver broach. She is a fashion icon, or a New Yorker just trying to get a cup of coffee on a Wednesday.

“That Grandmother can’t possibly be as mean as she seems,” says Christopher. Just you wait, Henry Higgins. The Grandmother issues a list of rules the children are expected to abide by if living in her house. I see nothing wrong with this. They don’t pay rent. She didn’t invite them for a sleepover. Is it so unreasonable that she wants them locked away with barely any food and no sunlight? “God sees everything,” says The Grandmother. “God sees all the evil you do behind my back.” That isn’t not something I’ve said to people who talk shit about me. The Grandmother was just minding her own business, reading her little Bible and shopping for broaches when these entitled blonde brats waltzed in demanding access to water and sustenance. Kids today, amirite? 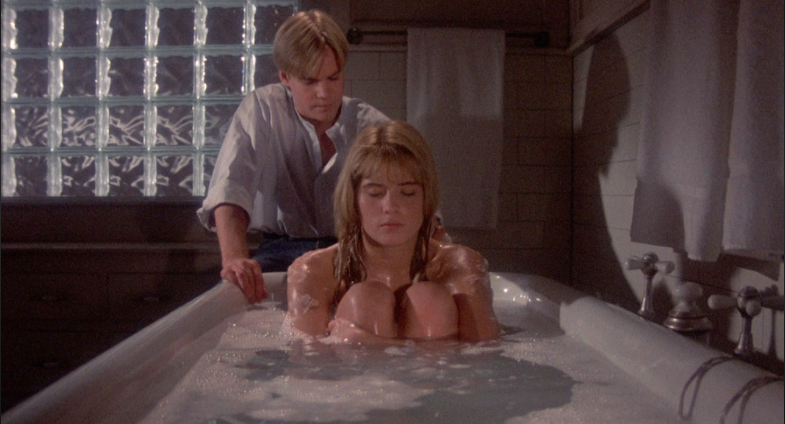 Corinne has to make nice to her daddy so that he’ll put her back in the will and make everyone rich. Not only do I love this plot point, but I love how openly Corinne discusses her plan with the children and the children, in turn, discuss it with The Grandmother. If you wanted nuance you came to the wrong place. And speaking of nuance…Corinne visits daddykins in his bedroom because he is ill. Without speaking she takes off her clothes and the Grandmother unveils an Indiana Jones whip and does whipping to Corinne, seventeen lashes, one for each of the years she lived in sin. We love a grudge. Then they send Corinne back to check on the children. Everyone is horrified to learn she’s been bullwhipped, but The Grandmother wants to ensure we find out why. Turns out, Corinne married her uncle and had four kids with him. “Devil Spawn!” The Grandmother (can you tell I like saying ‘The Grandmother’?) shouts at the four non-non-blondes. No one is angry at the right thing here. The children defend their mother and hate on granny but like…Corinne… you went and married YOUR UNCLE. If I had the choice between being a rich heiress and marrying my uncle I would not marry my uncle.

Despite a promise that they wouldn’t be locked away for a lengthy sentence, Cathy and Chris soon learn they’re not going anywhere. Corinne shows them the attic upstairs, accessible by a secret door in their closet. Based on the title of the film, I thought more would happen in the attic. Instead it’s just a cobweb hotel where the children do arts and crafts. It’s not even a magical attic. Lame. “But we clung to our dreams,” Cathy assures the viewer in the same way I would assure bar guests that, “Yep, I’m still pursuing writing” and they’d be like, “Really? Still?” and I’d be like, “Yeah never give up!” and they’d be like, “Never say never!” The younger children chant, “We want a TV! We want ice cream!” Well then they should GET A JOB.

The Grandmother’s big rule is: boys sleep in one bed, girls in the other. It’s not a ridiculous rule. It’s not even a villain rule. But still, Cathy and Christopher disobey and can’t help but fall asleep in each other’s arms, so naturally The Grandmother catches them, convinced they will embark on a life of sin just like their parents (but more on that later). Cathy opposes anything The Grandmother tries to do which is just bad strategy on her part. If I were Cathy I would button my shirt up real tight, find an old broach and Bible in the attic, and say, “Mother is a filthy whore. Teach me your ways Grandmama.” And she would say, “Right this way, my child of God” and we’d go for margs or something (I don’t know what religious fanatics do for fun). Instead Cathy shouts a lot and I just mute the TV during her scenes. The Grandmother cuts off Cathy’s hair in a pretty great segment that I liked a lot until I read the book. In the book, while Cathy is sleeping The Grandmother sneaks into the room and puts tar on Cathy’s head, forcing Cathy to make the difficult decision of cutting off her golden locks. Petty and methodical. We love to see it. 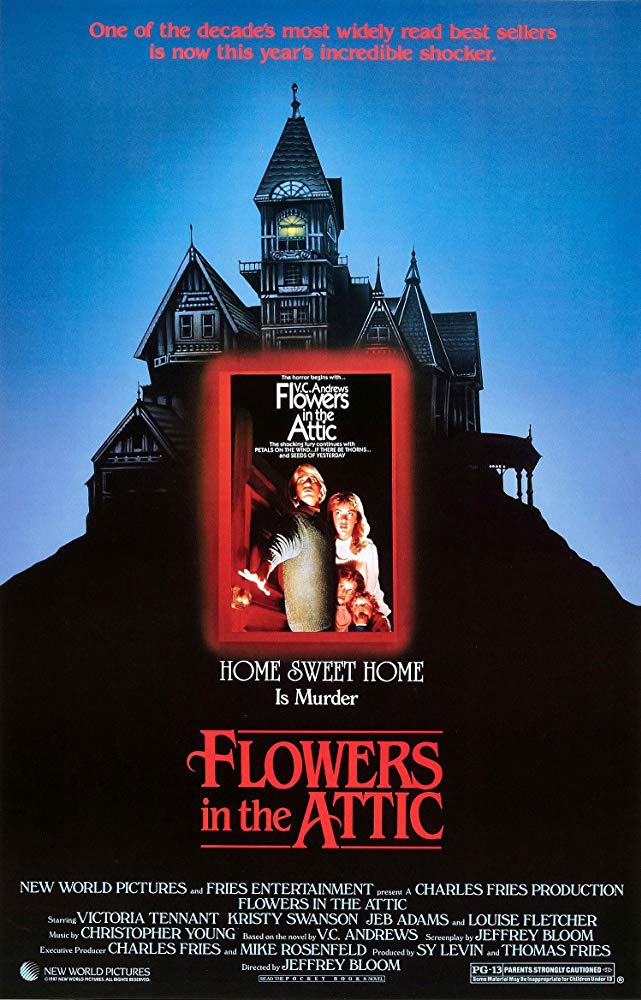 Okay, so maybe it was wrong of The Grandmother to stop feeding them. Maybe that was bad. But it’s not like the kids were trying to contribute anything to the household. All those arts and crafts they’re making in the attic, why aren’t they all like, “Need help doing the dishes?” After a bout of near starvation, the food begins to arrive again (on a tray, mind you). Every day these spoiled kids get breakfast in bed. It’s lunacy. And now a new addition: sugar coated cookies. Then the Mother returns after an absence and the kids are pissed she hasn’t been visiting them. Corinne is all like, “Can you stop making everything about you?” but really she just calls them “heartless.” It turns out, she’s literally on her own private season of The Bachelorette while her children are locked away upstairs.

The youngest child, Corrie, dies mysteriously. Cathy and Christopher realize they have to escape with little Carrie before they all die. The day of their fateful escape is the same day Corinne is getting remarried! We learn that The Grandfather has been dead and Corinne never intended to set them free. In fact it was she who had been putting arsenic in the cookies, not the Grandmother as originally suggested. When the children confront Corinne, she pretends not to know them. Cathy tries to feed her a bit of poison cookie during her wedding, forcing her backwards, and sending her to her demise over a ledge, where she gets caught and hanged to death. The children walk off the estate with no clothes, no money, no maps, etc. but a voice over narration tells us that they grew up just fine.

Final Thoughts: Test audiences rejected the original cut of this film which included the incest between Cathy and Chris that was featured in the book (in the original five part series, Cathy and Christopher even get married and have kids of their own), so they cut out the incest but not the sexual tension. I remember texting my friend who introduced me to this thinking, “Wait? Are they gonna fuck? Why is this happening?” Little did I know the world of V.C. Andrews was full of sibling love. What’s strange is that those same test audiences had read the books and loved them, so why was it okay to read incest but not to view it on the big screen? Did that make it seem too real? I like the movie without the incest, because the tension is icky enough to know what they want to do. I wish The Grandmother was in it more, and got a better ending. Alas, maybe I shouldn’t have been rooting for her the whole time. Wes Craven was hired to write the screenplay, but the studio rejected it for being too violent. I would love to read it, and to have seen what Craven would have done with this alluringly depraved series.