Reviewing Michel Hazanavicius’ COUPEZ! (CUT!, and known as FINAL CUT in English) represents a bit of quandary for anyone who, like this writer, saw and loved Shinichiro Ueda’s ONE CUT OF THE DEAD (reviewed here). Hazanavicius’ remake of Ueda’s movie hews so closely to its source, right down to any number of specific shots, that its very existence could seem superfluous at best and regressively opportunistic at worst. Yet I can’t deny that I, and the rest of the audience at the Fantasia International Film Festival’s showing, had a hilarious good time watching it. The material loses very little in translation, and Hazanavicius has added new little fillips here and there, a number of them acknowledging COUPEZ!’s own status as a remake.

As before, the first half-hour or so (presented as one long, uninterrupted take) centers on a ragtag movie crew shooting a zombie flick in an abandoned building, and falling victim to an attack of actual undead. The director (Romain Duris) is a taskmaster who doesn’t stop short of physically abusing his actors, the makeup on the real ghouls doesn’t look any less tacky than that on the “undead” actors he’s guiding, there are frequent awkward pauses and bits of business and…all of these Frenchmen and -women have Japanese names. What’s going on here? Anyone who’s seen ONE CUT will recognize from that last detail that there’s an additional meta level happening, and for those who haven’t…well, consider this a SPOILER ALERT, since discussing certain key revelations is necessary to continue this review. 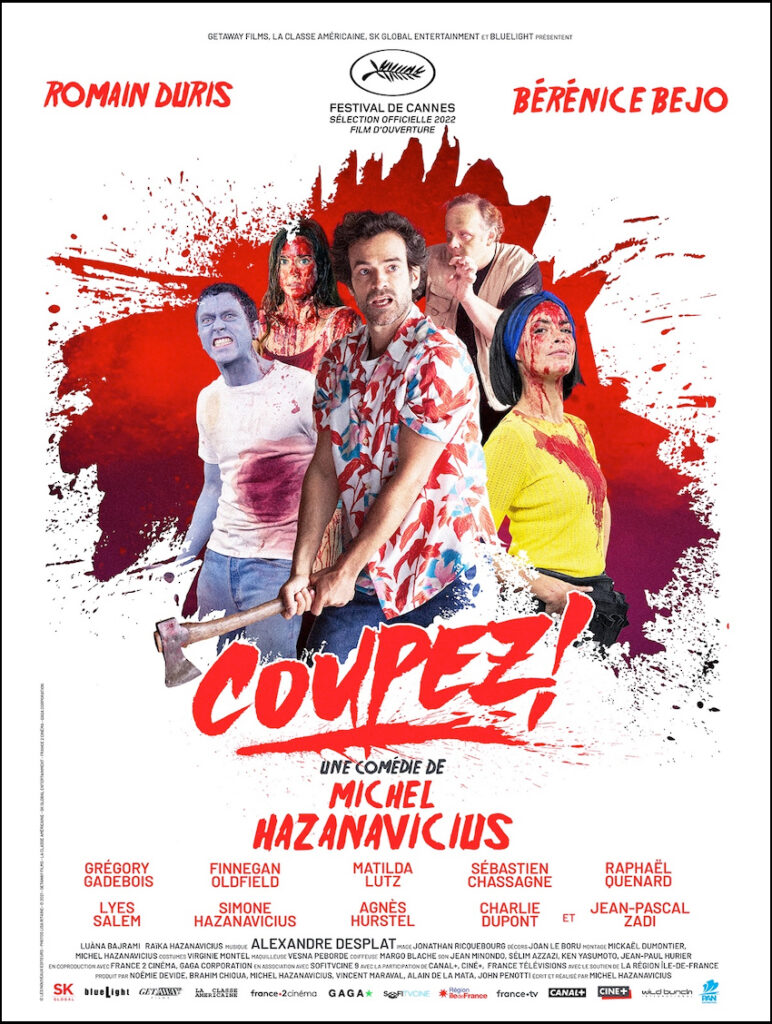 The first act is revealed to be a livestream presentation, simply titled Z, within COUPEZ!, also being directed by Duris’ character (real name Rémi). With his reputation for doing things “fast, cheap and decent,” Rémi has been hired by a Japanese team to remake a project from their home country which is never named, but is obviously ONE CUT; Yoshiko Takehara even reprises her exec role from Ueda’s movie. The midsection of COUPEZ! deals with the preparations for this ambitious if seriously underbudgeted project, and then we go behind the scenes to witness just what happens to their best-laid plans, as assorted accidents and snafus result in the misstep-laden Z we previously watched, adding new and often highly amusing levels to the chaos.

Hazanavicius hasn’t tried to fix what wasn’t broke, with the same character foibles and arcs that played so well in ONE CUT faithfully recreated. What’s new is his playful approach to acknowledging his predecessor, via Madame Matsuda (Takehara) and her colleagues maintaining a controlling influence on Rémi’s movie while he attempts to make it his own. (Rémi’s exasperation leads him to make a very ill-advised historical reference that results in one of the biggest laughs.) The reactions of the Japanese team as Z falls apart before their eyes and Rémi tries desperately to hold it together create a number of humorous moments, as do the reactions of new character Fatih (Jean-Pascal Zadi), Z’s soundtrack musician, as he does his best to keep up with the many improvised turns the production takes.

If there’s one advantage ONE CUT has over COUPEZ!, it’s that the tiny budget (only about $25,000) of Ueda’s own movie gave its celebration of ragtag ingenuity an extra change of authenticity. Hazanavicius’ adaptation was clearly much more expensive (negating some of the how’d-they-do-that? amazement underlying ONE CUT’s entertainment value), and features French stars such as Duris and Bérénice Bejo in the cast (though for genre fans, the most recognizable face will be that of REVENGE’s Matilda Lutz as Ava, Z’s female lead). Yet Hazanavicius isn’t condescending to B- (or Z-) moviemakers and their limitations in COUPEZ!; the problems on Z stem not from the incompetence of its creators but from their personal frailties and idiosyncrasies, and occasions of just plain bad luck.

In the midst of all the frenetic and funny action, there’s a heart to COUPEZ! as well, resting largely in the relationships between Rémi and his wife Nadia (Bejo), a former actress turned makeup artist, and his teenage daughter Romy, played by the writer/director’s own daughter Simone Hazanavicius in yet another self-referential touch, albeit one that pays touching dividends by the end of the movie. Both Nadia and Romy wind up pressed into service on Z as Rémi struggles to get his movie across the finish line, consistently fighting to overcome the many obstacles thrown at him even as his producer Mounir (Lyès Salem, who somehow looks exactly like a producer) would be content to settle for less. Hazanavicius may have a major career and an Oscar for THE ARTIST, but outlier Rémy is clearly his hero here. The celebration of necessity as the mother of invention underlies the many laughs in COUPEZ!, and there are enough of them, even if you’ve seen ONE CUT OF THE DEAD, to make it well worth catching.