Exclusive Interview: The creators of “BACURAU,” the must-see thriller now on-line, Part One

With its theatrical release interrupted by the spread of COVID-19, the riveting Brazilian thriller BACURAU has now been made available as part of distributor Kino Lorber’s new Kino Marquee virtual exhibition initiative. RUE MORGUE got some time with writer/directors Kleber Mendonça Filho and Juliano Dornelles to discuss their engrossing achievement.

BACURAU is named after the tiny, fictional rural town in northeast Brazil where it takes place, and the villagers start to notice small signs that something strange is going on. They can’t find their home on Internet maps, their cell service becomes intermittent and a water supply truck is ambushed. Little do they realize that they have been targeted by a group of wealthier, well-armed foreigners, led by Michael (Udo Kier). A slow build that lets us get to know Bacurau’s citizens intimately before ultimately exploding into ultraviolence, BACURAU melds classic Western and horror tropes while also addressing very pertinent issues of class and xenophobia. It can be viewed via a number of on-line “screening rooms” tied to theaters that had planned to show the movie; see a list of those venues here.

When you were developing BACURAU’s storyline, did the idea to do a political allegory come first, or did you start off wanting to do a genre film, and the political stuff came later?

KLEBER MENDONÇA FILHO: First, second and third: Just do a genre film, and then everything fell into place. When somebody watches a film or reads a book, there’s a lot of reverse engineering about how they look at the film or the book, when in fact, the basic idea is what came first. At the beginning, we had the desire to make a genre film, and then we came up with a series of conflicts that, at the end of the day, are political. It’s not like we woke up one day saying, “I want to do a political film,” but now that BACURAU is being shown all over the world, I can say that yeah, it does have that side to it, because it’s about history repeating itself. But first we had the idea to do a Western, but a Western that would be Brazilian, while feeding off American and Italian Westerns. 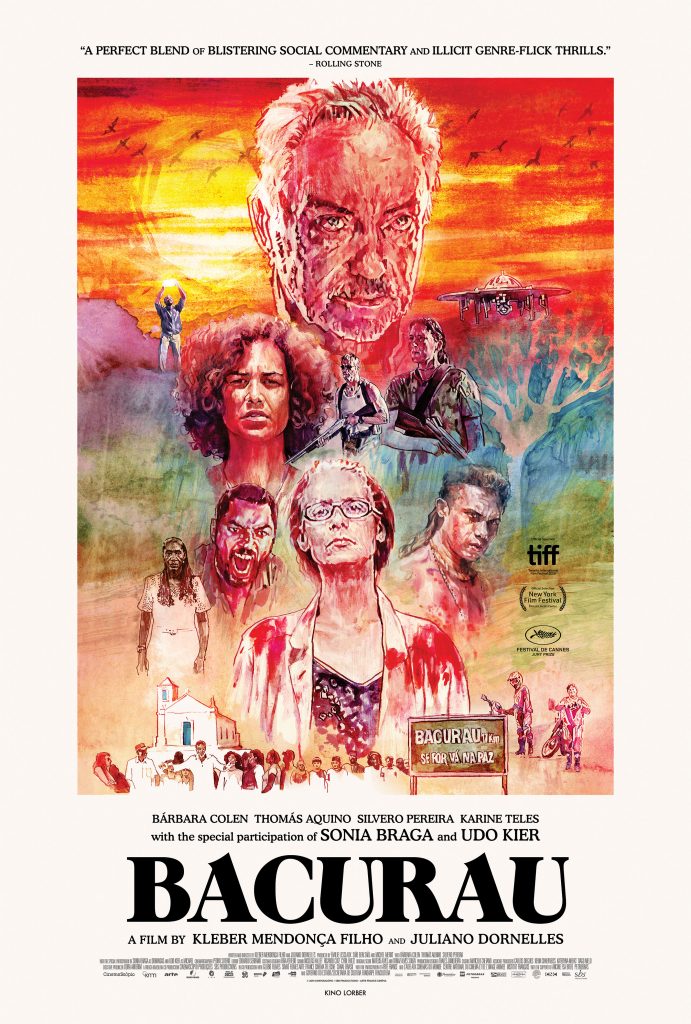 JULIANO DORNELLES: We never worried about making a Western obeying those rules. If at one moment, it would be sci-fi, OK, so be it, no problem. If it’s horror, that’s OK too. We were at the Festival of Brasilia in 2009 with a short, sci-fi-ish mock documentary, COLD TROPICS [RECIFE FRIO], about climate change in our city, that Kleber wrote and directed and I helped him to produce. We had this moment of joy of seeing our genre film being so well-received at that festival, because the audience went mad. It was like a soccer match—people screaming, it was crazy.

We watched a lot of movies at this festival, and among them we saw a lot of documentaries with an ethnographic point of view that we didn’t agree with very much. They portrayed these kind of simple people living in faraway places in the countryside, isolated communities, always with this anthropological point of view that was well-intended but really looked down on these people from up high. We didn’t agree with that; we felt annoyed, actually, and thought, OK, let’s make a film about a community filled with very complex and interesting and powerful and awesome people. We believe there’s no such thing as simple people. So this is political? Maybe, but we never worried about politics.

KMF: But then it became political, because one of the great reactions in Brazil we had was that this is a classic situation of cultural decodification. Maybe it goes unnoticed in the States, but I think there and in France, you still have the same problems of representation in television and cinema. DELIVERANCE, for example, John Boorman’s film. It’s a wonderful movie, but it looks at the locals as inbred, super-violent, nasty, uncivilized, bad people. So what we did in BACURAU is turn the tables, turn things upside down. So now the indigenous people are the heroes, and the invaders are actually the kind of heroes that cinema has given us for 120 years. It’s a change in the roles, and how the roles are played, and then it becomes a political discussion, because people are not used to seeing that kind of representation.

In terms of the politics, I was thinking about the fact that the invaders are upper-class and look down on the townspeople they’re attacking.

KMF: Well, you can say upper-class when you compare them to the villagers, but we actually had this idea that the attackers would be very working-class, wherever it is that they come from. There’s one who’s a human-resources guy in a supermarket, and another one works in a state prison. We liked the idea that they’re quite well-off in comparison to a small community in another country. So everything becomes a political discussion, because the film is all about how we are perceived by others. There’s a nice little moment which for me is very relevant: This woman, who’s apparently being paid to serve at the compound, is Brazilian and she talks to the couple, thinking that they are not Brazilian. And the woman says, “No, we speak Portuguese, we are Brazilian.” They are seen in the village as kind of city people, therefore socially superior, but in the meeting at the compound, they have kind of a lower rank when they are talking to the Americans, to Udo. So there is a lot of role-playing, in a way.

But of course, this is only designated by society, because actually, everyone is the same, and the people in Bacurau are not lesser people, or less important people. This has been much-discussed in Brazil during the release of the film, and the divide that exists between our region, the northeast, and the southeast, which is where, historically, power and money have always been. It’s a complicated web of power relations.

How did Udo Kier become involved?

KMF: Udo is one of our favorites.

JD: Udo chose us, working with us, actually.

KMF: I met him in Palm Springs, where he lives. I was at the Palm Springs Film Festival, and we hit it off. We talked for an hour, and he asked if I ever thought of writing a script for him, and I said yes. We began to dream with the idea of having Udo in the film.

JD: He immediately texted me: “Udo wants to work with us!” We always fantasized this idea of having Udo as that character. Michael was really inspired by the possibility of having Udo play him.

KMF: We began to add little things to fit Udo’s profile, and one of them was the whole thing where he says, “I haven’t been to Germany in 40 years. I’m more American than you are.”