One of the most memorable performances in a horror movie so far this year–and likely of the whole year–is actually a collection of performances. Highly respected British actor Rory Kinnear (PENNY DREADFUL) plays almost all the title roles in Alex Garland’s MEN, and discusses his approach to them below.

In MEN, currently in release from A24, Jessie Buckley plays Harper, who has lost her husband in an extremely traumatic manner and travels to a rural part of England to recuperate. From the start, she’s put at slight unease by Geoffrey, the owner of the house she rents; he’s the first of the parts Kinnear plays, which become increasingly threatening as the movie continues, ranging from a vicar who suggests that her husband’s death was Harper’s fault to the ancient folk figure of The Green Man. (See our review here, and a chat with Garland here.) Kinnear’s presence in all those guises is one of the intriguing mysteries of MEN, and one of its great achievements.

At what point in the course of taking on the project and reading the script did you know that you would be playing all those parts?

That was up front; Alex didn’t hide that. In fact, when I first read it, I thought I was going to be playing James, the husband, as well, so it was a relief not to have to do that one too [laughs]. But I already knew that’s what was going to be asked of me, and I very quickly loved it as an idea. But I loved it because that idea means something, and it’s not being used as a gimmick or as a way of showing off my acting virtuosity, which doesn’t interest me. I don’t want people coming away from this film saying, “What an impressive feat that was”; I wanted to make sure all these characters exist as credibly and as firmly rooted as possible within the world Alex wanted to create. The fact that they’re all played by one person, I see as being as a thematic choice that is impactful for the character of Harper, and for the repercussions of the whole film. 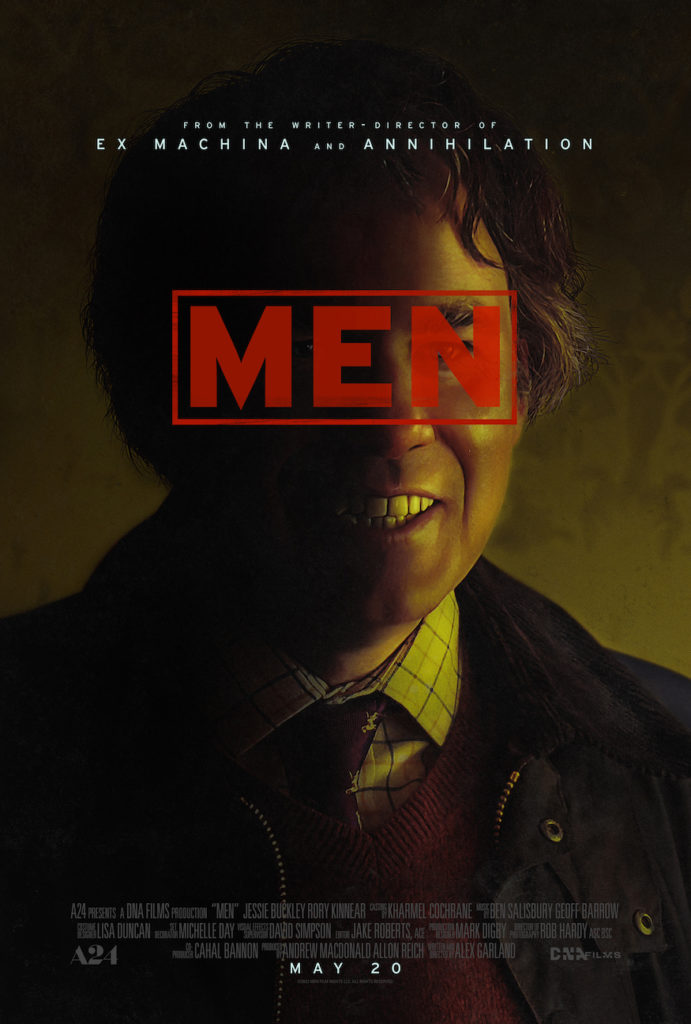 Can you elaborate on that, on what it means to you and how it impacts on Harper?

Well, Alex likes to play his cards pretty close to his chest when it comes to explaining any of his films, or giving any answers, and when something is as thematically and imagistically rich and dense as MEN is, there’s going to be a multiplicity of responses. What is so nice about that, and so striking about making that big choice to have the same actor play all these men, is that they all have a slightly emotional impact just in the nature of the choice itself. Everyone I’ve spoken to who’s seen the film has reacted in a different way, and it has meant something different to each of them, and it’s usually a response regarding their own lived experience. In that sense, watching a woman question her response to trauma, and the way that trauma can keep on reappearing in different forms and guises and repeating itself, how you take ownership of that trauma and take charge of it and repurpose it–potentially more fruitfully rather than destructively for your life–I feel like that multiplicity of responses is all about that lived experience, and how this movie jibes with that.

Can you talk about the makeup process of transforming into all your different characters?

What was nice about coming onto the project rather early was that everyone came together at around the same time, to start their creative processes. The first thing I did was to write biographies for each one of the characters, so that both Lisa [Duncan] in costumes and Nicole [Stafford] in hair and makeup would have a jumping-off point, so that they didn’t spend time going down an avenue that I didn’t necessarily think was the way forward. Quite a few of the characters don’t have much to do or didn’t have much description of their look, so there was a potential that everyone would go off in very different ways. And I wasn’t writing those biographies with a view to saying, “They look like this” or “They wear this.” It was, this is where they grew up, this is what their parents did, this is where they went to school, that kind of thing. So you got a sense of who each person was, and then Lisa and Nicole were able to use their own artistic creativity to flesh that out.

Obviously, there was a lot of trial and error, and then when we actually got to the location and into the rehearsal process, most days would be trying on something different, and sometimes things just felt right, sometimes it felt like things were missing, and it was just a case of playing with various different things until I felt comfortable, because by the time I got to set, I was going to have to have complete ownership of who this character was. Sometimes I was only going to be that character very, very briefly on a day, so there was no chance to warm up to him; I had to know from the off who that person was. 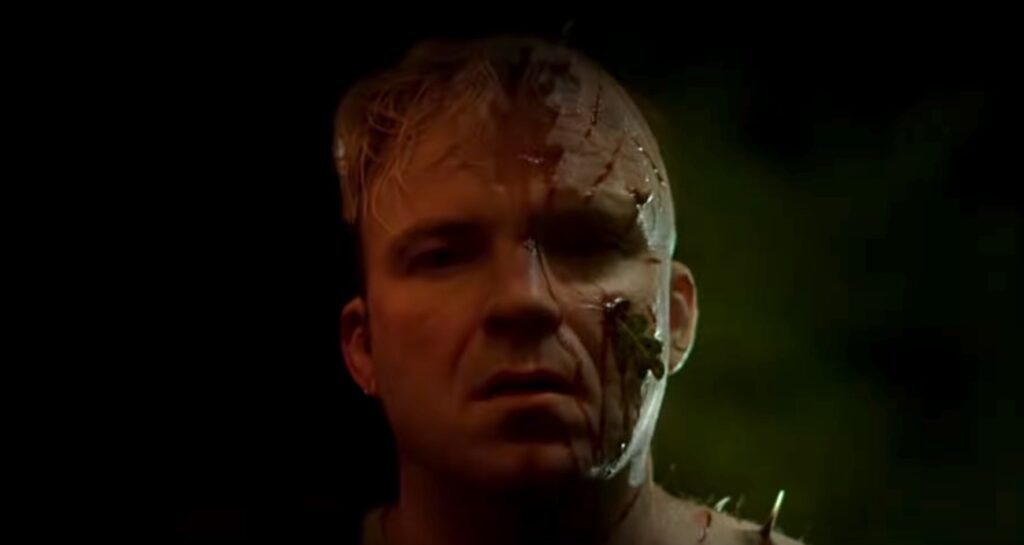 How did you approach that when it came to playing The Green Man, who’s a mythological character rather than a real one?

That was very much led by Alex. The Green Man and sheela-na-gig figures meant something very strongly to him, so he, particularly concerning the look of them, was very concerned and fastidious about making sure everything was right. That’s not really something I can take ownership of in terms of their appearance, but in terms of who they were, and the sense of the primal essence of them, giving them a sense of timelessness but at the same time a rooted personality was interesting to try out.

Did you have any compunctions about all the nudity the Green Man role involved?

Well, you couldn’t really have him wearing clothes [laughs]; it kind of takes away from what the Green Man is. Obviously, he needed in the first instances to be shocking to Harper. Both those appearances come at times when she is feeling herself and being able to express herself, and being open and musical and creative, and the shock and the threat of a naked man is what stops her. Thematically, that is quite rich for an audience to take in as well. So, no, I knew the nudity was part of the deal.

Did you try to separate your real self from Jessie Buckley during the shoot, since you were interacting with her as so many different characters when filming?

No, because we had that two-week rehearsal period. It was also during COVID, so we were staying at a hotel where there were no other guests, and it sort of looked like a haunted country estate. Day and night seemed to roll into one, and because it was essentially just the two of us together on set as well, we knew we had to look after each other, and we had to laugh about it, given the extreme nature of some of the stuff we were doing. So the release valve of laughter was highly employed.​