Having adapted the GROUNDHOG DAY template into a slasher saga with HAPPY DEATH DAY, Christopher Landon has now given the body-swap genre a bloody spin with FREAKY. RUE MORGUE got some exclusive words with the director about his film, which opens tomorrow from Universal and Blumhouse.

FREAKY stars Vince Vaughn as “The Blissfield Butcher,” a suburb-stalking madman who attempts to claim troubled teenager Millie Kessler (Kathryn Newton) as his next victim. But since he uses an ancient Aztec dagger in the act, she doesn’t die; instead, they switch consciousnesses, so now the Butcher is in Millie’s body prowling her high school while Millie in the Butcher’s body tries to reverse the process, with the help of her friends Nyla (Celeste O’Connor) and Josh (Misha Osherovich). Endlessly inventive and pointedly inclusive (Nyla is African-American and Josh is gay), FREAKY, which Landon scripted with Michael Kennedy, is a step forward in the slasher genre that also honors its predecessors, while shedding lots of blood and getting lots of laughs in the process.

As I mentioned in my review, I enjoyed the fact that while Jason had only gotten to the FRANKENSTEIN MEETS THE WOLF MAN stage of his official career, you’ve unofficially brought him to the ABBOTT AND COSTELLO MEET FRANKENSTEIN phase. Was that on your mind, taking the slasher genre on its historical progression into comedy?

[Laughs] Yeah, I think that’s definitely there, but it’s weird; a lot of the stuff I’ve done hasn’t been by design. It’s not like I sat down one day and was like, this is going to be my career path now, I’m gonna make these kinds of movies. But I’ve gravitated to them, or they’ve gravitated to me. I look at Blumhouse [where he also made HAPPY DEATH DAY and its sequel] as being like a family, and I like being the goofy misfit in that family, because a lot of their movies are super-intense and really scary, and I get to sort of hang out in the corner and be gross and make people laugh. It’s not a bad place to be. 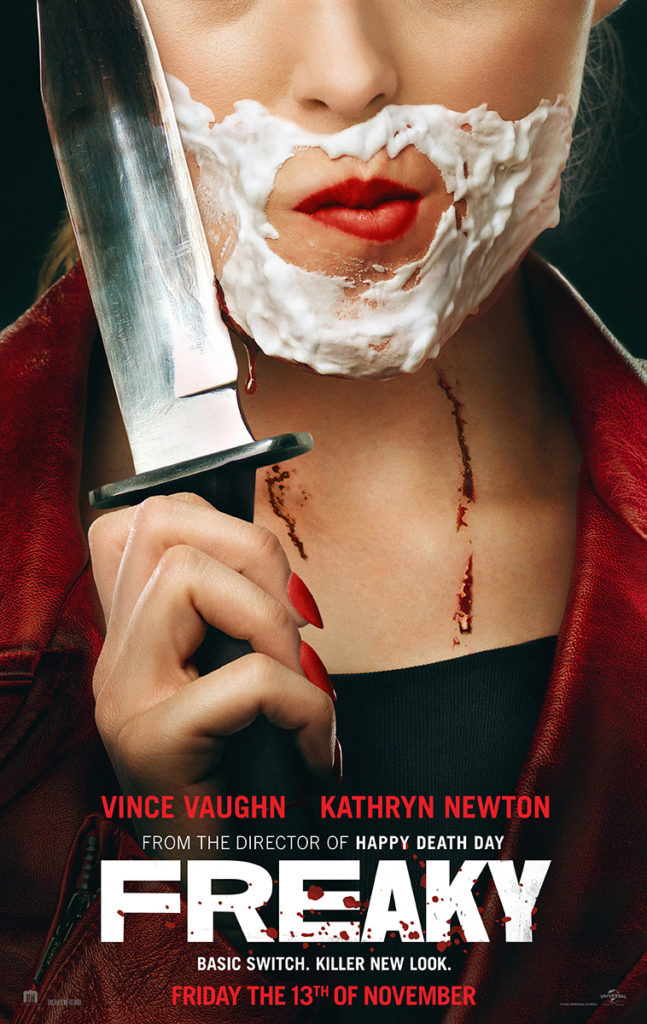 The HAPPY DEATH DAY movies were PG-13 and FREAKY is a hard R, so what led to your decision to go full-on with the gore this time?

When Michael Kennedy and I were conceptualizing the movie and when we got started writing, we wanted this to be really bloody, and very rated R. We felt like the body-swap concept is sort of inherently cute, and to fully pull off this weird genre mashup, we needed to go gory to heighten the disparity between these two genres. It felt like we were trying to make a really violent Disney film; that’s what we were after, and there was never a doubt. For us, it was a deal-breaker when we brought the project to Jason Blum and Universal, because there was always the chance that they would force us to make it PG-13, and we did not want to neuter it. And they actually never even suggested it!

You also play with issues of gender in a way that hasn’t been seen in this kind of movie before.

We wanted to touch on a lot of different things in this movie. Millie is a great character, because she’s a very relatable person; she’s shy and co-dependent and trying to figure out her place in the world, but she also has these two great best friends. We got to explore some of the things that can happen when you’re playing with gender identity, and being able to have an openly gay and confident lead character in the film was important to us. Michael and I were very much aware of wanting to get that kind of representation out there, because the horror genre has kind of lacked that for a long time. I think we’re seeing a change now, and we wanted to be part of that change.

Yeah, that was tricky, tricky stuff! I had Vince and Kathryn in mind from the start, so we approached both of them at the same time. They were my first choices, and I was really nervous, because I strongly felt that there weren’t many actors who could pull this stuff off outside of those two. When they accepted, I was elated, because I just don’t know what I would have done without them. Vince is incredibly versatile; he’s charming and funny, but he’s physically imposing and can be menacing and scary. He has such a great track record, and his career speaks to all those things. There are very few actors out there like him. 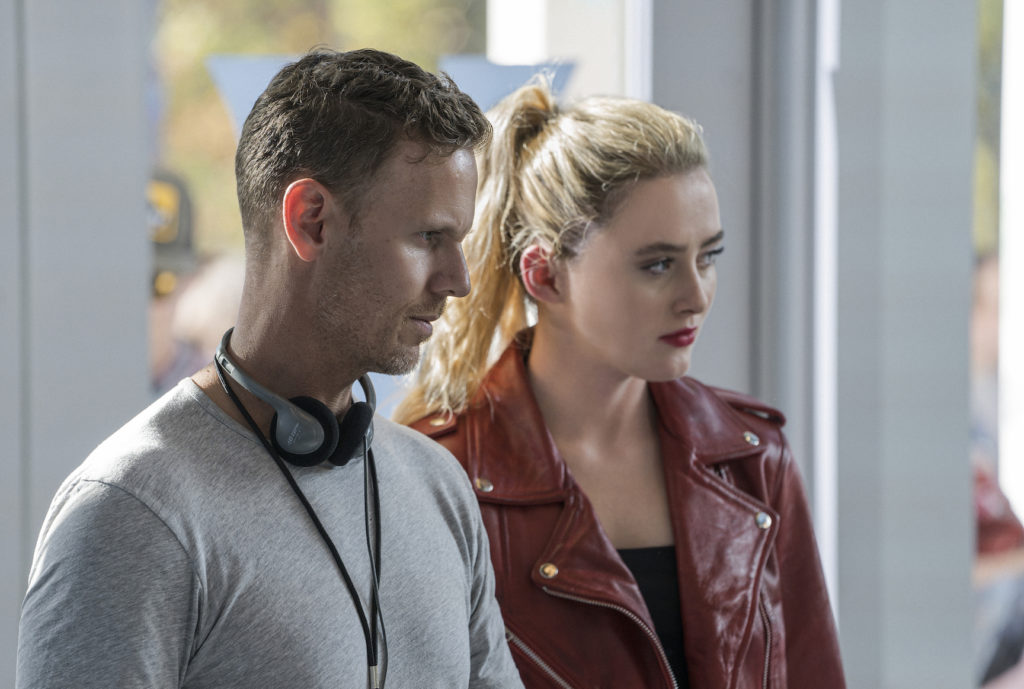 And then Kathryn and I had worked together on PARANORMAL ACTIVITY 4, and I knew that she has enormous confidence and is very skillful, and she brought a lot of personal energy. She’s a very competitive person–she’s a pro golfer, which a lot of people don’t know about her–so she has this innate competitive drive, and I thought that spoke to the Butcher side of her part. I was incredibly lucky to get both of them.

I thought Vaughn was a fun choice because he played Norman Bates, the original serial killer inhabited by a female persona, in the PSYCHO remake. Was that any part of your thinking?

It really wasn’t; I was more informed by a lot of the stuff he’s done lately, like BRAWL IN CELL BLOCK 99. It’s funny, and this is a terrible thing to admit: I’ve actually never seen Vince’s version of PSYCHO! It’s one of those movies where I feel terrible saying that out loud; when it came out, I knew Gus Van Sant was going for a sort of performance-art thing, because otherwise, why the fuck would you remake that movie? It seemed almost like putting a gun to your head. So I didn’t feel the need to see it, and I probably should now.

I also enjoyed the shout-outs to other classic teen comedies, like the casting of FERRIS BUELLER’s Alan Ruck and the use of “Que Sera, Sera” from HEATHERS. Was your intention to create a kind of history of teen movies in one with FREAKY?

Yeah, it was. In a lot of what I do, I tend to be very homage-y and referential, and create love letters to the films that inspired me, and that raised me. So I love to do that, and also figure out how to do it subtly and wink at the audience a bit without taking them out of the movie. It was a lot of fun to be able to include some of those elements.

Getting back to the subject of representation, do you feel that the horror audience may be more accepting of those themes than perhaps general mainstream audiences are?

I do. I think horror fans, by nature, are sort of the misfits, and that a lot of us are drawn to the genre because there’s a certain sort of coping element and a catharsis to it all. I know that when I was a teenager in high school–you know, high school is a horror movie for a lot of people, and being able to watch horror films was sort of a safe space to put your fear. The horror community is very tight-knit, and I remember other kids I knew who loved horror, and it was great to have this thing we could bond and connect over. The horror community tends to embace all types of people, and it’s a genre that welcomes a little bit of everything. I believe that’s why so many filmmakers get their start in horror, because it’s a space that feels a little more free, and a little more liberating.

On the flip side of that, slasher films have had a reputation for being the most puritanical kind of horror film, and your films have offered an alternative.

Yeah, what I’ve tried to do is hit the Refresh button in some ways, and at least modernize the idea of a final girl, give the characters some agency and really defined arcs, and also flip the tropes. All those things have played into what I try to do as a filmmaker and a storyteller. It’s very fertile ground, and there’s still a lot to be said and a lot to do in the space of a slasher movie.

Having now done GROUNDHOG DAY and FREAKY FRIDAY as slasher movies, what’s the next classic comedy you’re going to turn into one?

[Laughs] Well, I am doing another movie with Michael Kennedy; I’m not writing this one, I’m a producer on it, and it’s been really fun to work on it. It involves time travel, so it’s pretty cool, but I don’t think I’m allowed to say any more about it; I don’t want to get in trouble!