At this point in his career, prolific author Stephen King has already given us plenty of material. For the past fifty years, he’s been churning out best sellers at a pace unmatched by any writer of his caliber around the world. Just six months after the release of Gwendy’s Final Task, King released FAIRY TALE, a novel that signals a bit of a departure from his usual style and possibly a new phase in his career. King returns to the fantasy genre 18 years after his celebrated completion of The Dark Tower series with an adventure into another world. Not Midworld, his nebulous fantasy realm that contains the Tower, the Beams, and the Dark Man himself. Not Delain, the world Jack Sawyer crosses to save his mother. This world is Empis, a realm of skeleton armies, mermaid-eating giants, and a magic sundial that can turn back time itself. While this world doesn’t specifically connect to any place King has written about before, it does bear out a prophecy from The Gunslinger, King’s first notable fantasy novel: “there are other worlds than these.” At more than 600 pages, FAIRY TALE is a large and unwieldy bridge between our reality and a new world filled with dangerous adventures.

Charlie Reade is a high school senior when he stumbles upon his injured neighbor, Mr. Howard Bowditch while walking home from school. Feeling like he owes a debt from the past, Charlie sees Mr. Bowditch to the hospital and sticks around to feed and care for his elderly dog, Radar. As he grows closer to the old man, he becomes more and more curious about Mr. Bowditch’s reclusive lifestyle, the gold pellets hidden within his crumbling house, and mysterious noises coming from a shed in the backyard. When Mr. Bowditch suddenly dies, Charlie is faced with a choice: journey to an alternate world in order to save Radar’s life or remain in our world and enjoy the short months he and his new canine companion have left. Charlie descends the long and winding stairs into Empis and faces an adventure the likes of which few of us have ever seen. But will he be able to return? 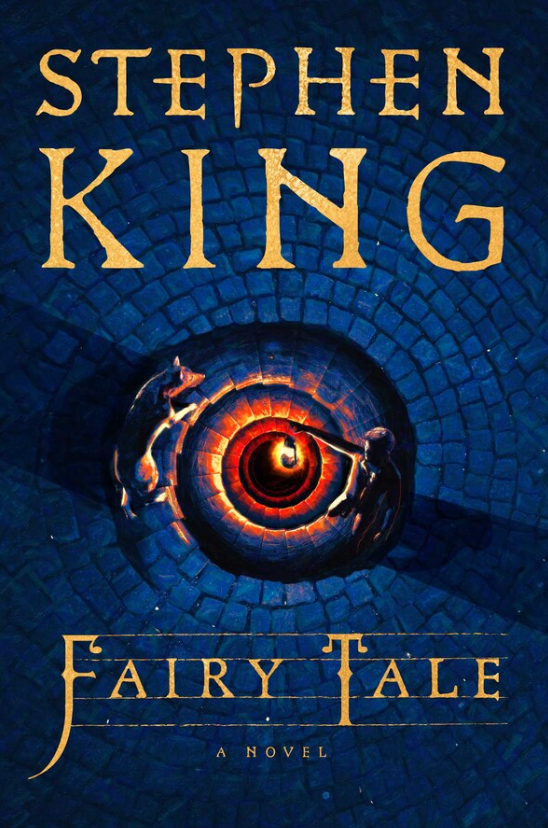 King’s newest novel could be split neatly into two parts: our world and Empis. The first third of Charlie’s adventure involves the early death of his mother, his father’s resulting descent into addiction, and his burgeoning friendship with Mr. Bowditch. We’re instantly drawn into Charlie’s inner life and it’s tempting to want to stay there for the entire novel. The story picks up a bit once he meets Mr. Bowditch and, just like Charlie, we fall head over heels in love with Radar. Charlie’s love for the “good girl” endears him to the reader despite the fact that his overall personality is rather dull. A dog lover himself, King writes Radar with so much compassion that she becomes an important character in the story and a believable reason for Charlie to risk his life. The friendship that develops between the much older Mr. Bowditch and his teenaged assistant is reminiscent of the relationship King explores in his recent novella, Mr. Harrigan’s Phone, and the much darker, Apt Pupil, a novella from his first collection. As King enters the twilight years of his career, these mentor relationships begin to take on new meaning and the prolific author seems to be reckoning with the legacy he will leave behind.

It’s perhaps not surprising to learn that Charlie does venture into the new world. The first part of this journey is a road adventure as he struggles to take Radar to the magical sundial that will give the two new friends more time together. In order to get there, he must travel through the lair of a hideous giant named Hannah and her equally depraved daughter Red Molly. These hideous beasts are both terrifying and disgusting, the perfect foil for a fantasy adventure. Unfortunately we don’t get to spend much time with them. King is more interested in the haunted city and a terrifying tyrant ruler called Flight-Killer. While some of Charlie’s journey through Empis is thrilling, particularly a night trek through the haunted city, this stretch ultimately proves to be confusing and ill-defined; a frustrating slog through a world we don’t really understand. Radar is sidelined for large stretches of the narrative as well and it’s difficult to resist skipping ahead a few pages to get back to the heart of the story.

King’s newest novel is very good. True to form, the seasoned author draws his characters well, making us reluctant to leave them behind. However, FAIRY TALE bears little resemblance to the horror King is known for. The novel is pure fantasy, more akin to his Dark Tower series than his time in Derry or Castle Rock. But Roland’s adventures with his ka-tet consist of eight novels and a multitude of tie-ins and connections in other work. FAIRY TALE ultimately feels like two different novels jammed into one. The sections in Empis feel rushed and hastily developed while the sections with Charlie and Mr. Bowditch feel forgotten by the end of the book. King tends to reinvent himself every seven years or so and it’s likely this will be the beginning of a new phase in his career. We may see more jaunts to this fantasy world in the future, but for now, what we have is an entertaining romp that sags a bit in the middle.