Blu-ray Review: Arrow Video digs up everything you’d want to know about “TREMORS”

It was 31 years ago this week that TREMORS first hit theaters as one of the last great practical-effects monster movies before JURASSIC PARK ushered in the CGI wave. It marked the end of an era, and harked back to the thrills of ’50s desert-set creature features–yet it feels as fresh today as it did when it opened in 1990. Its pleasures are only compounded by the special 4K UHD/Blu-ray edition issued by Arrow Video last month, which finally gives the movie its full visual and supplemental due.

TREMORS is distinguished in its genre by its setting of almost all of its action in daylight, which makes the clarity and color of Arrow’s 4K restoration all the more crucial. Under the bright sun of Lone Pine, California, where the crew built the middle-of-nowhere town of Perfection, Nevada, Kevin Bacon and Fred Ward perform one of horror/comedy’s great buddy acts as handymen Val and Earl. As they are pressed into rising to the occasion when Perfection is threatened by giant carnivorous sandworms that come to be dubbed “graboids,” TREMORS introduces a fine ensemble of townspeople whose likability (even Bobby Jacoby’s teenage pain in the ass Melvin) is another key to TREMORS’ success. Chief among them, of course, are Michael Gross and Reba McEntire as Burt and Heather Gummer, perhaps the last gun-happy folks with paranoid theories about the government to be successfully played as comedic heroes.

Their subterranean co-stars are just as persuasive, as created by Amalgamated Dynamics’ Alec Gillis and Tom Woodruff Jr. Even under the harshest lighting conditions, the graboids always seem organic and of the earth, and among the many successful conceits of S.S. Wilson and Brent Maddock’s script is that they’re able to learn and out-think their human prey, which gives the latter’s struggle to survive an extra cat-and-mouse dimension. First-time feature director Ron Underwood had previously collaborated with Wilson and Maddock on short films (included among Arrow’s many disc supplements), and he plays to and up all the strengths of their screenplay, keeping the pace taut and the thrills and laughs coming all the way to the perfectly set up and satisfying conclusion.​ 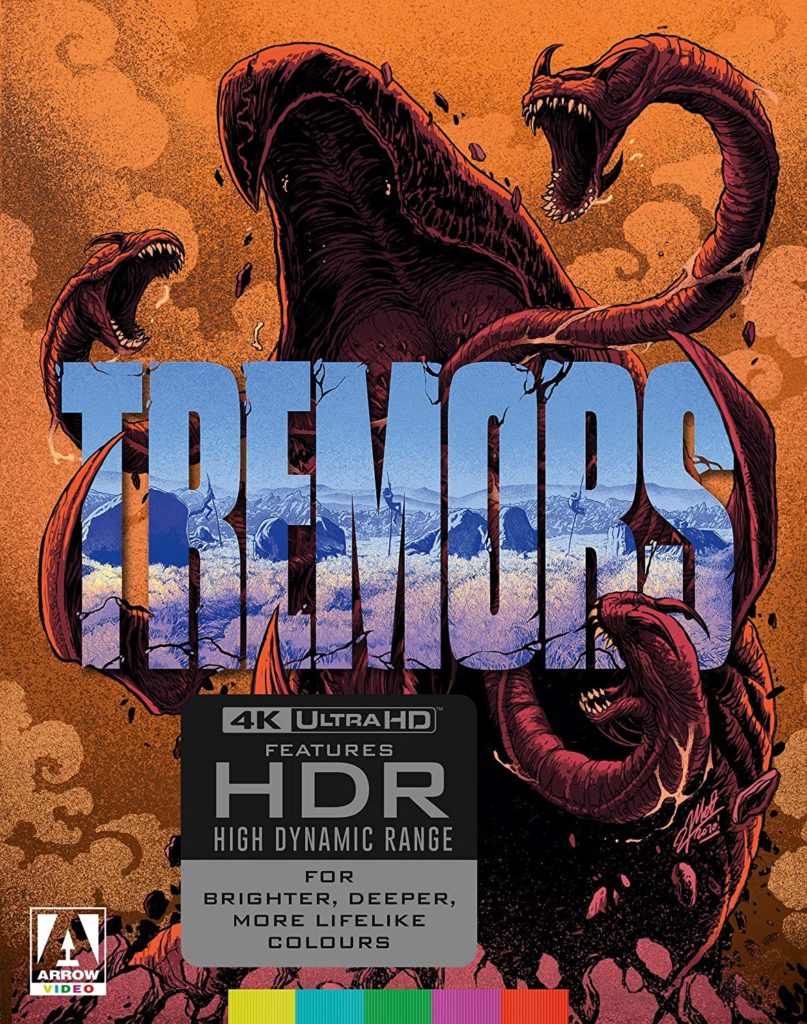 Arrow has fully complemented the film with that 1.85:1 transfer, which catches all the detail of the landscapes and effects, well beyond previous disc editions. The supplemental selection has also been significantly upgraded, starting with a pair of audio commentaries. The first reunites Underwood, Wilson and Maddock for a conversation with a few more gaps of silence than one might expect with three participants, but that offers a lot of good information nonetheless. On the second, SEEKING PERFECTION: THE UNOFFICIAL GUIDE TO “TREMORS” author Jonathan Melville shares observations and little moments in the film that one would only notice “if you watch it dozens and dozens of times.” Working from both the script and interviews conducted for his book, he provides a full appreciation of the movie along with plenty of info on the production, the effects, an opening scene deleted because a preview audience objected to a dead rabbit, and the cast (John Cusack was first approached to star; Gross was a former NRA member who dropped out when they became too extreme, and was against gun violence, to the point where he wouldn’t be filmed aiming one at any person).

Also new is the half-hour documentary “Making Perfection,” which is perfectly framed by location manager Tony Salome returning to the Lone Pine locations. It includes a number of anecdotes not told in the commentaries, plus behind-the-scenes footage and a very funny wrap-up involving a unique piece of merch. Then there are individual interviews with co-producer Nancy Roberts, revealing the kind of development details that don’t often get addressed; cinematographer Alexander Gruszynski, who discusses creating sunlit terror and tension and giving the graboids a “point of view”; associate producer Ellen Collett, revealing the influence of Roger Corman on TREMORS and her negative first impressions of Gruszynski, whom she wound up marrying; composers Ernest Troost and Robert Folk, who narrate an assortment of footage and photos as they explain their scoring and why the latter replaced the former (yet went uncredited); and the various creators of the miniature and optical effects, several of which you probably didn’t realize were effects.

Ported over from previous releases are a 44-minute “Making of TREMORS” from 1996 that’s meatier than typical supplemental documentaries of the time, with unique stories and details not found in Arrow’s other extras, plus the original ending; four more deleted scenes, including a discarded opening with a great final shot; a 10-minute effects featurette; and the original EPK. Arrow has additionally added the amusing “Pardon My French!”, showcasing overdubs of profane dialogue for TREMORS’ TV broadcast, trailers for the film and its sequels, TV, VHS and radio promos, a whole slew of production stills, behind-the-scenes photos, storyboards and promo art and two different script drafts that are worth a scan for their various differences from the final film (among other things, you’ll learn where Melvin’s parents are).

And all that’s just on the first of this two-disc set. For the diehards, the second contains extended interviews from “Making Perfection” with several of the participants, a gag reel and a 71-minute two-part cast-and-crew Q&A from a 2015 screening at Hollywood’s ArcLight theater. Finally, three of those early short films by the TREMORS trio have been unearthed; the first is Wilson’s terrific student film RECORDED LIVE, in which a job applicant is confronted by living, predatory videotape, which this writer recalls seeing a bunch of times on HBO back in the ’80s. The other two are educational movies: DICTIONARY: THE ADVENTURE OF WORDS and the futuristic LIBRARY REPORT, the latter focusing on a tween girl (Keri Montgomery, John Stockwell’s little sister in CHRISTINE) and a sentient robot that prefigured “Number Five” in Wilson and Maddock’s script for SHORT CIRCUIT.

Everything is handsomely packaged in a solid, attractively designed cardboard case that also houses six lobby card reproductions, a neat little graboid-anatomy cross-section poster by Matt Frank, inspired by Shoji Ohtomo’s similar kaiju art, and a fully illustrated booklet. Here, Kim Newman offers well-observed historical context for both TREMORS and its creators, while Melville provides quite a bit of detail on the many sequels. A FANGORIA set-visit article by Marc Shapiro is reprinted, along with the original presskit; these are the only two places in this set where you’ll find comments from executive producer Gale Anne Hurd, but she’s the only conspicuous absence from this otherwise exhaustive and excellent release.