Blanche points the broken bottle top towards Stanley. He asks, “What’d you do that for?” “So I could twist the broken end in your face!” spits Blanche. As Stanley talks of roughhouse, Blanche charges at the beefy object of her desire, stabbing him to death with a bottle of his own booze. Claiming self-defense, Blanche continues to live with Stella and assists her sister through a pregnancy full of grief. Once the blessed child is born – our young Billy – Blanche sends her sister on a road trip with the brakes snipped. Death in an instant. Blanche raises her nephew all by herself, but she can’t silence the demons in her head and the desire in her heart; the desire to love passionately and inappropriately, the desire to kill and to butcher… and this is how I imagined the pitch meeting for BUTCHER BAKER NIGHTMARE MAKER to go. How wrong am I?

An opening death sequence worthy of Final Destination 2 sets up our fright-fest: after the horrific death of his parents, Billy (McNichol) grows up under the intrusive tutelage of his batty Aunt Cheryl (Terrell), an over-sexualized interpretation of every Bette Davis role ever played. As she enters Billy’s room to wake him up for school, she discovers an unused condom in his wallet, which sends her into a rage… but out of jealousy, no? Rather than nudge her nephew awake, or make a loud noise, she whispers sweet nothings into his ear until he wakes up. She sits in bed with him and the viewer is instantly uneasy at this unseemly display of so-called family affection. “You make me happy,” says Aunt Cheryl, breathlessly. I’ll give Tyrrell this: you never don’t know what she’s thinking, and everything is rooted in her love, even if that love is maybe slightly twisted – no, totally batshit. Okay. I’m just saying, more of us have sprinklings of Aunt Cheryl within us than we might be liking to admit.

Billy goes to school in perfect 80s suburbia, which is to say the Nike socks are as white as the census, and our jocks are gay! His jock rival GayJock81 steps in his way as Billy tries to enter the locker room. “Next time keep your queer hands off of me. I don’t like to be touched,” he says. Billy responds, “What are you getting so hot about? We’re on the same team!” I feel bad for the jock bully because he loves Billy almost as much as Aunt Cheryl. He would not be unwelcome at a forest orgy with those boys from Heathers, but I don’t think GayJock81 is ready to play with anyone besides Billy. The high school scenes make this film impossible to distinguish from Nightmare on Elm Street 2: Freddy’s Revenge, and I think that’s a wonderful problem to encounter. Which movie am I watching? I guess I’ll have to watch both back to back for clarity!

Cheryl refuses to date anyone because she has Billy, even though he’s planning to go off to college on a scholarship. Cheryl vacillates between outright denial that he could leave her and spurious support for his dreams. The looming sexual perversity of all who orbit around Billy sets the tone and marks the tension. A line like, “The meat sauce will never forgive you” has never been nor will ever be about bolognese. The next day Cheryl takes her pickled veggies down into the basement where she likes to do her sulking. I love that. I love that pickling is now my measurement for when things have gotten really bad. If I start pickling eggs then I might have to rejoin Tinder. She paints her nails and delicately hums along to Jesus Christ Superstar. Is Aunt Cheryl an unlikely gay icon or just visibility in the 80s? She makes sexual advances on the TV repairman, and when he rebuffs her, she stabs him in the neck with a butcher knife. Aunt Cheryl is a refreshing blend of Baby Jane Hudson and Julia from Hellraiser. 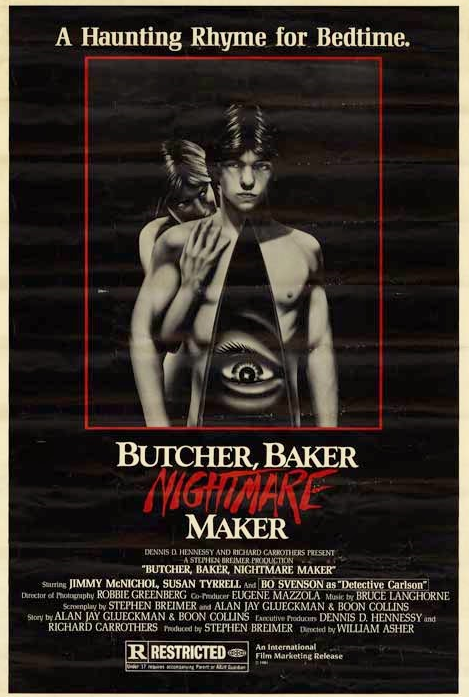 Billy pretends to have committed the murder in order to protect his aunt. This type of loyalty could be explained by their close bond; they only have each other after all. But perhaps it intimates that Aunt Cheryl’s sexual feelings might not be as one-sided as we at first suspected. As she answers questions from the homophobic monster Detective Carlson (Svenson), she tries to embody all the stage actresses of Broadway for the past one hundred years. When she denies Carlson’s claims she is a lesbian, she does so with the breathy delivery of Vivien Leigh and Glynis Johns.

No arrests are made, but the Detective is suspicious of these two. His homophobia interferes with his spidey senses; he knows he stumbled into an inappropriate relationship, unfortunately, he doesn’t have incest on the brain. In his investigation, he learns the TV repairman was having a secret homosexual relationship with Billy’s basketball coach Tom Landers (Steve Eastin). Since all we have to go on is that they bought each other matching rings, the film depicts a healthy not-over-sexualized gay couple living in the 80s. No baths, no AIDS, no camp. Carlson still weaponizes their simple living, using the ring to blackmail Landers into quitting. Carlson hates homos and isn’t afraid to say it.

“Are you a fag?” and “It does make sense if you are a fag too” are sentences that just roll off Carlson’s tongue, to such an extreme that it is almost surprising he doesn’t have a secret family of gimps in his basement. Carlson interrogates Billy, believing the murder to be a lover’s quarrel, and suggesting that Billy is somehow in a thrupple, which he couldn’t possibly have time for since he’s basically dating Aunt Cheryl. Bad detective work, detective! Not once does Billy show an aversion to homosexuality, but as much as I might look for it, I don’t think the film suggests he could be queer either. BUTCHER BAKER NIGHTMARE MAKER is a thrilling commentary on Reagan-era homophobia and the hypocrisy of family values that haunts our political and social landscape today. Lauren Boebert watches this movie and sides with Detective Carlson. Marjorie Taylor Greene watches this movie when she has the girls over for a night of wine coolers and polio shots. Who’s bringing the dip? I’ll stop. Drink every time someone’s rights are threatened! Ok, now I’ll stop.

“Fucking deviants,” remarks Carlson, “the world is full of them.” Our white picket fences must be protected! Speaking of… Aunt Cheryl catches Billy and his girlfriend Julia (Julia Duffy) making sweet love. “You get dressed and get that slut out of here,” yells Aunt Cheryl. She can’t have Billy leave her, so she drugs him the night of the big game in front of all the important college scouts from the Bernie Telsey Agency. After he collapses, Aunt Cheryl takes him home. Billy wakes up a day later in his new attic bedroom outfitted with all his childhood toys. Okay, this is some scary shit. She stops Billy from going to school despite his pleas. “You learned enough,” says Aunt Cheryl.

Since we’re getting close to the end of the movie, Aunt Cheryl decides now is a good time to go full bananas. She cuts her hair to resemble an Olivia Coleman impersonator, bashes Julia in the back of the head with a meat pulverizer (not a euphemism sadly), and machetes her poor friend Margie (moment of silence for Margie who was polite enough to pretend to like Aunt Cheryl’s home haircut). Aunt Cheryl plays crazy like a drunk person, but I don’t mind it. She faces off with her beloved Billy, nearly stopping the film dead in its tracks with the best line ever: “I’m your girlfriend now.” Chef’s kiss. In the ultimate betrayal, Billy stabs Aunt Cheryl in the heart. He calls Coach Landers for help, but when Carlson arrives soon after it only confirms his naughty gay love triangle theory. Carlson refuses to believe the evidence, and if Billy didn’t shoot him to death, he’d be on Twitter today explaining the harmful effects of women’s studies and vaccines.

At the end of the film, we learn Billy stood trial for the murder of Carlson but was acquitted, which shifts the tone of the film. At times, BUTCHER BAKER NIGHTMARE MAKER feels like a made for television movie, an after-school special with a murky theme. The kills are performed with full slasher gore, but the rest of the film is treated like a psychological thriller. I don’t mind that it toggles genres, although I’m still sad about Margie. What I like about the film is that Aunt Cheryl never finds the irony in her role. She is not Kathleen Turner in Serial Mom. She is not Faye Dunaway in… real life. A reviewer in the eighties suggested this film was Psycho as if Tennessee Williams wrote it. I don’t mind that comparison at all. Theatricality pulsates within the film, giving it another layer of queerness. Fifty years later, people like Detective Carlson still exist, and that is perhaps the scariest part of all.