*Warning: this essay is riddled with Scream (2022) spoilers.

When I attend a Lady Gaga concert, I scream: a guttural, high-pitched shriek that renders my voice raspy the following day, but not in that sultry Sophia Bush way. Should I pull back at concerts? Buy less LG hats? I own several, but now I wonder how many hats I am away from committing murder. Culture teaches us that stanning is a mandatory expression of adulation. Maybe you say the words verbatim or code your language: I love, I’m obsessed with. Maybe you say you’re in the Beyhive, confess to being a Swiftie or a Little Monster, or revere Madonna as the one and true queen. But nowhere in the rhetoric is it permissible to say, “I like Beyonce” or “I can enjoy Madonna and Gaga at a respectful distance without pitting them against each other because isn’t that the downfall of society that we can’t have two strong females without crafting the narrative that they must be enemies?” No one has ever said, “I have a healthy fondness for Tori Amos.” Toxic fandom isn’t just an oxymoron, it’s a requirement. Are you even a real fan if you wouldn’t commit murder in the name of your idol? 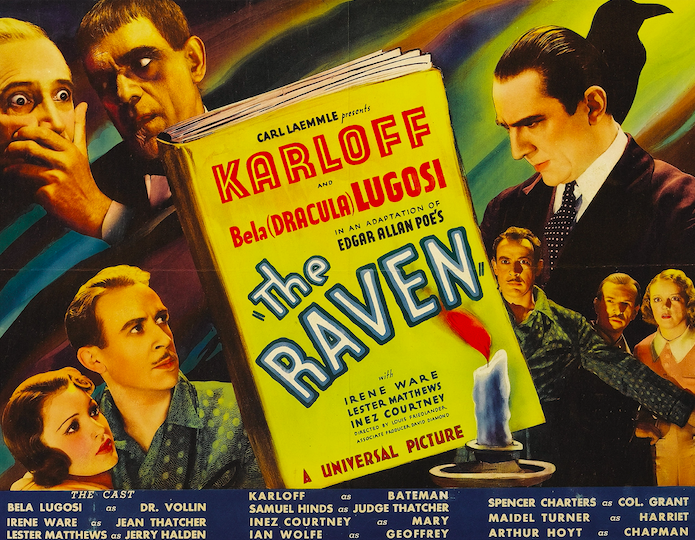 This week I’m dishing on 1935’s THE RAVEN, an unlikely entry into the toxic fandom sub-genre that was epitomized by Scream and the more recent Scream…does that sound right? Or, for the purposes of this article can I just call it Scream 5? Will this upset the loyalists? If I die, then you know why. Anywho, loosely based on the classic Edgar Allen Poe poem, THE RAVEN stars Bela Lugosi (Dracula), Boris Karloff (Frankenstein, The Mummy), and Irene Ware (Chandu the Magician). With a screenplay by David Boehm and direction by Lew Landers, this overlooked Universal classic runs a whopping 61 minutes.

We open on a young woman named Jean Thatcher (Ware) driving off a cliff, which is 1935’s blanket opinion on women drivers. She needs surgery, and fast. The only person skilled enough to help is the newly retired Dr. Vollin (Lugosi), an eccentric, Poe obsessed megalomaniac. “Death is my talisman,” says Dr. Vollin in the throwaway manner some of us say, “Extra cheese.” What I like about Lugosi’s performance is that he never seeks to bluff you; he is from Crazy Town and it’s cool if you know that. From his raven taxidermy to his library of Poe to his torture chamber in the basement with a swinging axe-pendulum, Dr. Vollin is a Mad Doctor living out and proud. At least Misery’s Annie Wilkes offers us ten to fifteen minutes of normalcy before revealing her cray-cray. The Scream movies pride themselves on killers with a cunning ability to hide their fanatical madness until the last act. But back in 1935, Dr. Vollin just wanted to be himself.

He spews out red flags such as “I’m a law unto myself” or “I’m a God.” When describing his torture chamber – this ultimate homage to his great cousin-fuckin’ Poe – he is quick to assert, “It’s more than just a hobby.” And yet Jean’s father Judge Thatcher (Samuel S. Hinds) still begs Dr. Vollin to operate on his daughter. Vollin’s ego gets in his own way, distracted by flattery, and he agrees to perform the surgery. As in Dark Victory, surgeon falls for patient. We are taught to believe their love is slightly one-sided, that the Mad Doctor would never be good enough for the innocent and sane Jean. Still, the misguided Jean reveals her own infatuation with Dr. Vollin, because like her contemporaries on F-Boy Island eighty-six years later, toxic masculinity and overconfidence are sexy. Daddy Thatcher intervenes, telling Vollin to promise never to see her daughter again. The self-proclaimed Mad Doctor does not like this one bit, and despite the looming threat of Poe’s number one fan, Judge Thatcher departs, believing he handled the matter. 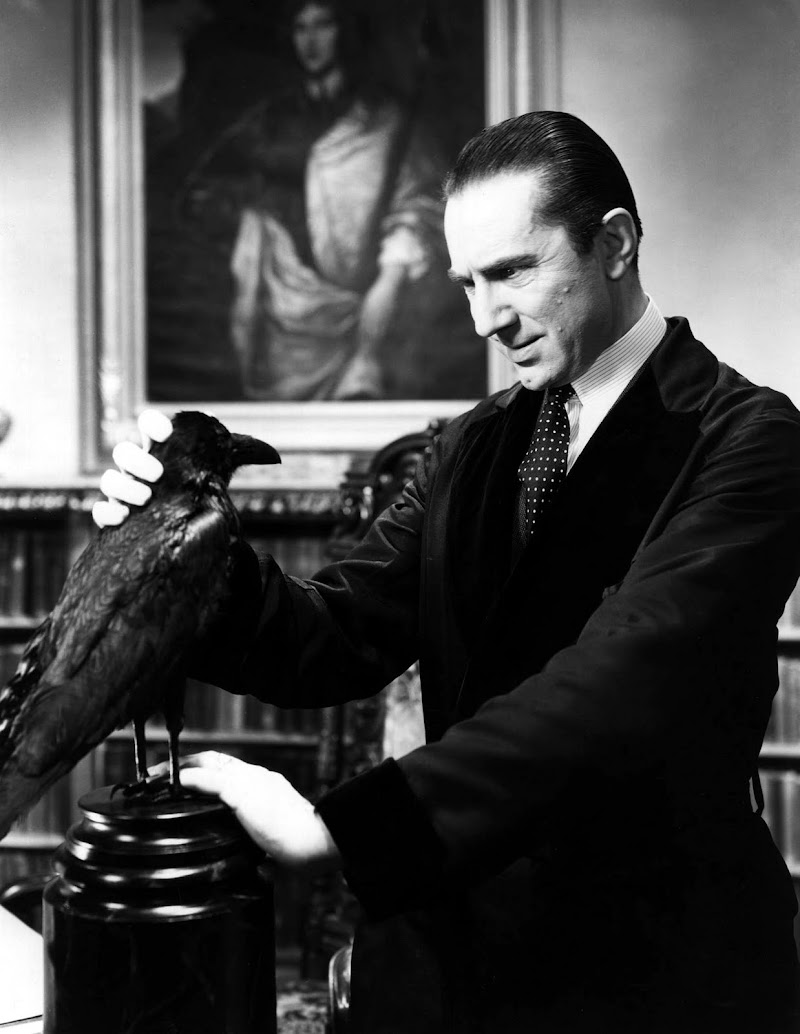 Next we are introduced to Karloff’s Edmund Bateman, a disfigured murderer on the run…pretty much the exact role he plays in Arsenic and Old Lace. Bateman arrives at the Mad Doctor’s mansion to have him perform surgery to correct his face. It had to be explained to me several times that Karloff’s character is meant to appear disfigured because I thought he was cute in a Bradley Cooper A Star is Born way. Despite Bateman’s offer of legitimate payment for the surgery, Dr. Vollin agrees only if Bateman becomes his evil henchman. Then Vollin botches the surgery on purpose because he is a petty bitch who reads too much Poe. “Everyone looks at me and says, ‘You’re ugly,’” explains Bateman, “Makes me feel mean.” Vollin exploits Bateman’s insecurities to make him a villain. Let that be a lesson to you Boris Karloff. Next time you need a makeover, skip Bela Lugosi and visit Michael Caine instead.

Dr. Vollin invites his enemies to stay for the weekend, and most confusing of all, they show up. The houseguests gather around and listen to Vollin carry on about Poe in an elongated, tedious way which reminded me of when I would torture my friends with anecdotes of my love for Kate Bush (SORRY FRIENDS). Why can’t people enjoy things quietly? Why is fandom so expressive? Billy, Stu, and their predecessors aren’t just toxic fans of the horror genre, they’re narcissists who love how clever they are and need to torture their victims endlessly by explaining just what they did in a Poirot-style climax. Dewey got off easy (“It’s an honor, bb!”). Twitter bios regularly list favorite artists as if one is providing height or eye-color. Fanaticism has evolved into a personality trait. Talking ad nauseam about the fandom is as important as enjoying the movie, reading the poem, or watching the Monster Ball live from Madison Square Garden.

With stellar lines like “What a torture! What a delicious torture!” we know just where this movie is headed: to the torture-chamber-basement, of course! Since Vollin can’t have Jean, no one can. He plans to kill her and her boyfriend in a shrinking room reminiscent of a certain garbage shaft from a certain space opera that certain people are…you guessed it, toxically fanatical about. Is a torture-basement that out of the question in a world where Stu Macher’s house is rented out for weddings? Don’t think so. Karloff decides he’d rather be ugly than an accessory, so he turns on Vollin, rescuing Jean and her beau while trapping the Mad Doctor in the shrinking room where he meets his well-deserved demise. 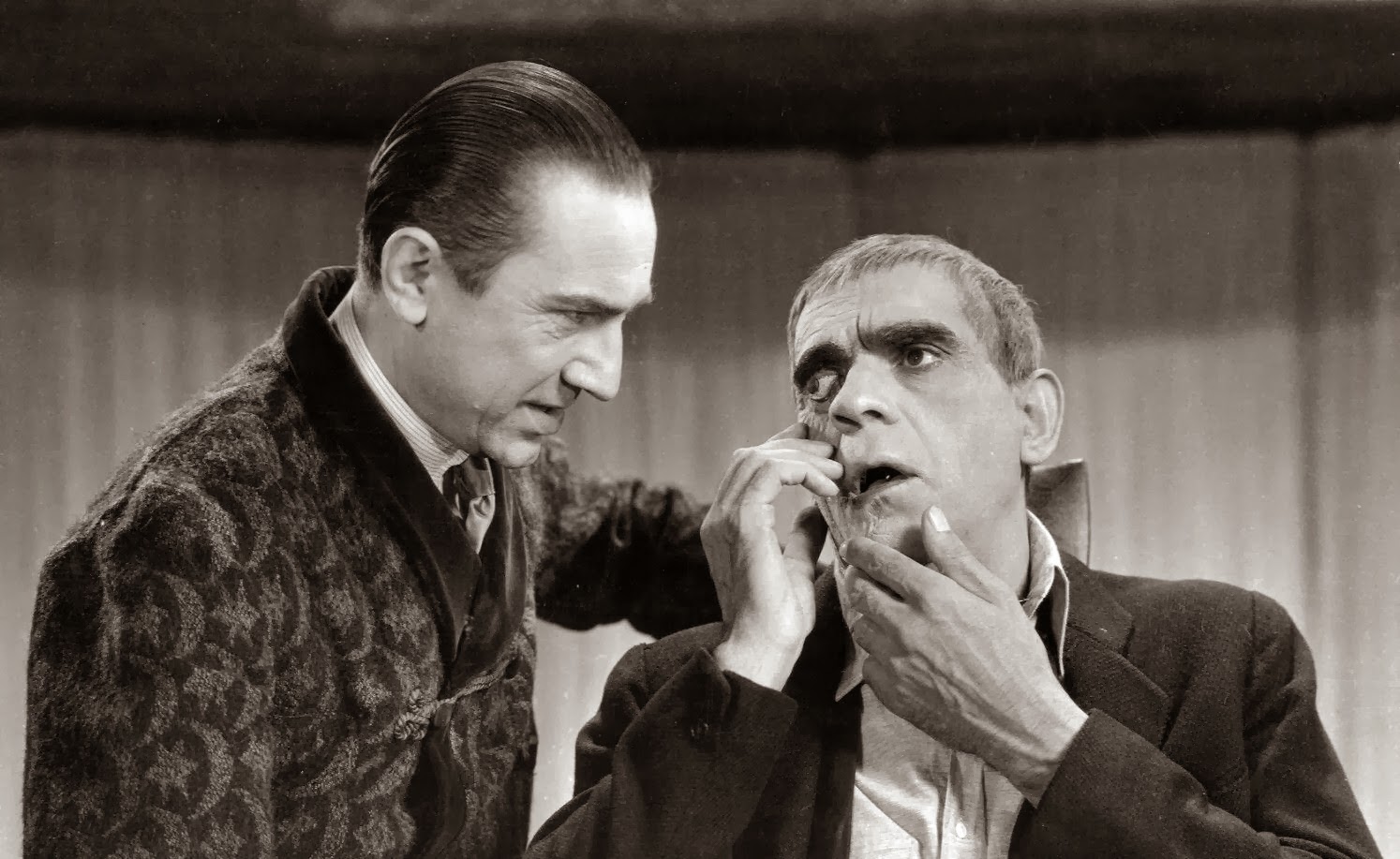 Of all the fans who don the Ghostface mask, none are more problematic than the recent reveals of Richie and Amber (although I have such a crush on her, I think I’m becoming a…fan). Richie and Amber embody the overzealous entitlement of a super fan, believing only they can reboot the fledgling Stab franchise by unleashing a new slew of murders, targeting legacy characters and the Degrassi: The Next Generation of Woodsboro survivors. When Richie and Amber finally bite it, the first thing I think is: “Oh, silence, nice.” Toxic fandom can be so damn loud. Billy Loomis told us not to blame the movies, but what does Scream 5 tell us? Blame the fans.

I went all the way back to 1935’s THE RAVEN to learn the same lesson Scream taught me: deranged fans are a bad thing. Annie Wilkes might be the most mainstream example of what happens when loving your idol goes too far. But despite these pop culture recalls, I struggle to understand what these movies do for us as people, people with Twitter bios and cocktail conversation; people who love fanatically. The movies may kill off these naughty fans who took it too far, but what about the rest of us? Will I put away my living room shrine to Kate Bush? Tuck my Gaga hats in a drawer and attempt to be more casual in my devotion? Or is it enough that I don’t take it one step further and do murders?

Vollin’s downfall is his need to be recognized as a Poe fan and lauded as a genius. Billy, Stu, Mickey, Jill, Charlie, Richie, and Amber desire validation that is both deadly and often irritating. It is important to abide by certain rules in order to survive toxic fandom. I humbly offer you three:

1. If you ask someone, “How are you?” and they respond with Taylor’s latest record sales, don’t unlock the front door.

2. If someone is an Elite Yelper, that is not an accomplishment, but a sign that one day they will feel totally justified in murdering a waiter.

3. If someone lists Halloween 3 high in their franchise ranking, know that they have already murdered your beer-fetching bestie in the basement. Run.

Final Thoughts: I enjoyed THE RAVEN tremendously, though it can’t decide on a tone. If it went a little lighter, it might have been as successful as Arsenic and Old Lace, or gone slightly darker to be recognized among the best that Universal Horror has to offer. Lugosi is always fun to watch, even if he plays it a little stiff. And while I’m grateful to the film for having such a relevant conversation about toxic fandom nearly one hundred years ago, and more grateful still for Scream 5’s latest super fans, I struggle to string together the significance of this commentary in the world I am forced to be a part of. If toxicity is required to be a super fan, what happens next?